Celgene (NASDAQ:CELG) has certainly had its challenges over the last year, but you wouldn’t have known it from the company’s first-quarter results. The big biotech announced on Friday that its Q1 revenue jumped 20% year over year, with adjusted diluted earnings per share soaring 23%.

The company’s CEO and other top executives discussed the tremendous first-quarter results and fielded questions from Wall Street analysts in a conference call Friday morning. Here are five key things you need to know from Celgene’s Q1 earnings update. 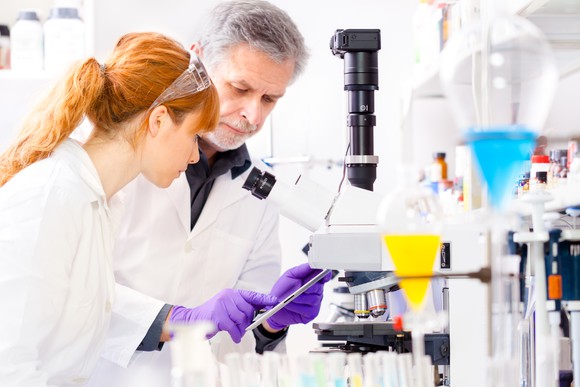 1. Negative impact of ozanimod setback was not as bad as many thought

Celgene’s stock performance so far this year has been dismal due primarily to a big setback in late February with the Food and Drug Administration rejecting its regulatory filing for ozanimod in treating multiple sclerosis (MS). This rejection was viewed by many as an unforced error by Celgene. Morgan Stanley analyst Matthew Harrison even predicted that the refiling for approval of ozanimod could be delayed by up to three years.

As it turned out, the ozanimod setback was bad — but not that bad. Celgene now plans to again file for approval in the first quarter of 2019, which means a delay of around one year.Celgene CEO Mark Alles stated that the anticipated 2019 launches of fedratinibin treating myelofibrosis and JCAR017 in treating non-Hodgkin lymphoma will enable the company “to absorb the financial impact caused by the delay in the expected launch of ozanimod.”

The addition of fedratinib and gaining full rights to JCAR017 helped Celgene to be able to reaffirm its 2020 outlook despite the ozanimod delay. But it was the better-than-expected success of the biotech’s hematology drugs that enabled Celgene to boost its full-year 2018 guidance.

First-quarter sales for Revlimid grew 19% year over year, while sales for Pomalyst increased 24% over the prior-year period. Nadim Ahmed, Celgene’s president of hematology and oncology, said that sales for both drugs are being helped by triplet combinations. The company now expects Revlimid and Pomalyst to each make roughly $100 million more in 2018 than originally projected.

Celgene missed analysts’ revenue expectations in the third quarter of 2017 because of headwinds for Otezla.Pessimists might have looked at the immunology drug’s performance then and thought that Celgene had a big problem on its hands. And they would have been wrong.

Sales for Otezla skyrocketed 46% year over year in Q1. Celgene’s contracting efforts with managed care plans appearto be paying off big-time. What about potential challenges from Cosentyx and Taltz? Terri Currant, Celgene’s president of inflammation and immunology, said that Otezla is primarily achieving its success in pre-biologic patients, while competitors are focused more on the post-biologic segment of the market.

4. Lots of pipeline updates on the way

There are quite a few potential catalysts on the way for Celgene. Data from a pivotal study for Otezla in treating scalp psoriasis should be reported later this year. The biotech plans to submit for approval of the drug in treating Behcet’s disease in both the U.S. and Japan.

Celgene’s hematology and oncology pipeline will be even busier. The company expects to announce results from phase 3 studies of Revlimid in lymphoma, Abraxane in adjuvant pancreatic cancer, and luspatercept in treating low-risk myelodysplastic syndrome (MDS) and beta-thalassemia. In addition, Celgene intends to submit fedratinib for approval in treating myelofibrosis.

But could Celgene afford another big deal? CFO Peter Kellogg acknowledged that acquisitions like Receptos in 2015 and Juno earlier this year reduces some capacity to make other large deals in the short-term. However, he added that the capacity “grows right back very quickly.” The company ended the first quarter with$4.7 billionin cash, cash equivalents, marketable debt securities and publicly traded equity securities.

In my view, Celgene’s first quarter served as a good reminder to investors about the potential for this biotech. Very few companies of Celgene’s size generate quarterly revenue and earnings growth of 20% or more. And even fewer achieve that kind of performance with shares trading well below nine times expected earnings.

The company seems to have learned some lessons from its ozanimod setback and has made appropriate changes to address the underlying problems that caused the blunder.I think that Celgene remains one of the most underappreciated growth stocks on the market — and continues to be one of the best bargains around.