Brokerages predict that ACCO Brands (NYSE:ACCO) will report sales of $384.97 million for the current fiscal quarter, Zacks reports. Four analysts have issued estimates for ACCO Brands’ earnings. The lowest sales estimate is $368.98 million and the highest is $393.50 million. ACCO Brands reported sales of $359.80 million in the same quarter last year, which indicates a positive year-over-year growth rate of 7%. The business is scheduled to announce its next earnings report before the market opens on Tuesday, May 1st.

According to Zacks, analysts expect that ACCO Brands will report full-year sales of $1.99 billion for the current financial year, with estimates ranging from $1.98 billion to $2.01 billion. For the next fiscal year, analysts forecast that the firm will report sales of $2.00 billion per share, with estimates ranging from $1.99 billion to $2.00 billion. Zacks’ sales averages are a mean average based on a survey of sell-side analysts that cover ACCO Brands.

ACCO Brands (NYSE:ACCO) last announced its earnings results on Wednesday, February 14th. The industrial products company reported $0.48 EPS for the quarter, beating the consensus estimate of $0.44 by $0.04. ACCO Brands had a return on equity of 17.97% and a net margin of 6.76%. The business had revenue of $566.80 million during the quarter, compared to the consensus estimate of $563.27 million. During the same period in the prior year, the business posted $0.32 earnings per share. ACCO Brands’s revenue was up 29.5% compared to the same quarter last year.

ACCO has been the subject of several analyst reports. Zacks Investment Research raised ACCO Brands from a “hold” rating to a “buy” rating and set a $15.00 target price for the company in a report on Wednesday, March 21st. ValuEngine downgraded ACCO Brands from a “buy” rating to a “hold” rating in a report on Monday, April 2nd. Three research analysts have rated the stock with a hold rating and two have given a buy rating to the stock. The company currently has an average rating of “Hold” and a consensus price target of $15.33.

The firm also recently declared a Not Available dividend, which was paid on Wednesday, March 21st. Investors of record on Thursday, March 1st were given a dividend of $0.06 per share. The ex-dividend date was Wednesday, February 28th. ACCO Brands’s payout ratio is 20.17%.

ACCO Brands declared that its board has authorized a stock repurchase plan on Wednesday, February 14th that allows the company to buyback $100.00 million in outstanding shares. This buyback authorization allows the industrial products company to purchase shares of its stock through open market purchases. Shares buyback plans are typically a sign that the company’s management believes its shares are undervalued.

ILLEGAL ACTIVITY NOTICE: This report was posted by Ticker Report and is the sole property of of Ticker Report. If you are accessing this report on another site, it was illegally stolen and republished in violation of United States and international trademark and copyright laws. The legal version of this report can be viewed at www.tickerreport.com/banking-finance/3374967/acco-brands-acco-expected-to-post-quarterly-sales-of-384-97-million.html. 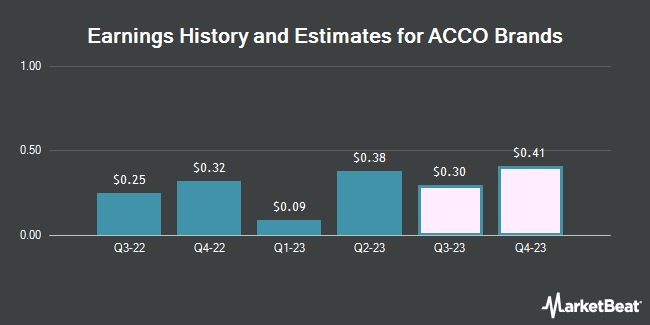 The S&P 500 is on track for its best quarter in a decade, up roughly 12 percent. And if history is any indication, the index could be set for more gains for the rest of the year.

Average True Range (ATR) is an indicator used to measure volatility. IT was introduced to the trading community by J. Welles Wilder in his 1978 book, New Concepts in Technical Trading Systems.

Mathematically, the formula is similar to an exponential moving average and was relatively eas