MannKind (NASDAQ:MNKD) made a financial move on May 25th involving its debt. The move is interesting in that the company paid down some of the debt that has the most time until maturity and is at the lowest interest rate of the borrowings it has. MannKind announced that it used 2,250,000 shares in exchange for $5,000,000 in principal and any unpaid and accrued interest.

MannKind has debt with Deerfield at higher interest rates, which it can also use shares to pay. The problem is that the stock price is well below the conversion rate agreed to by Deerfield, and likely the company would have had to make concessions in order to renegotiate any exchange on that debt. MannKind has $15,000,000 due to Deerfield in July of this year. The company’s cash commitments for debt and insulin can be seen in the chart below: 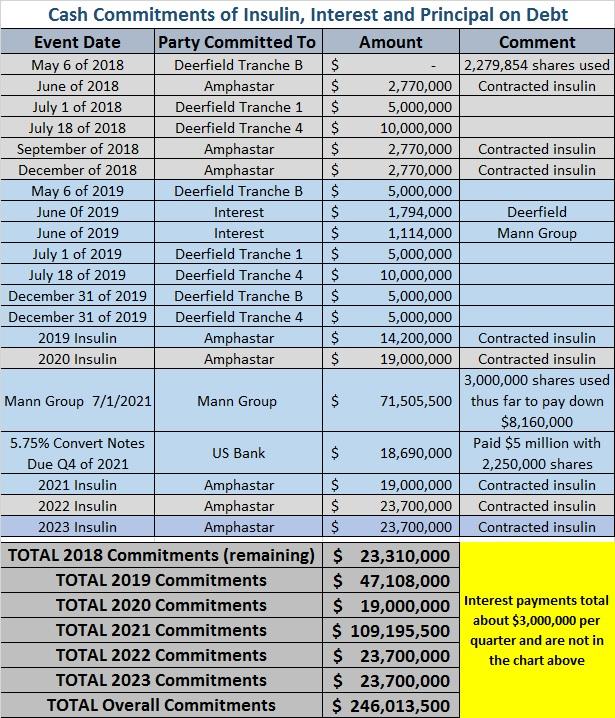 In general terms, this move does help to improve the balance sheet. That being said, there is definitely more immediate debt issues that would have helped the overall situation more, especially when you consider the substantial sums (relative to cash on hand) that MannKind has coming due in just 8 weeks or so. It is possible that the company is negotiating with Deerfield on that debt, but those negotiations will be tough when you consider that Deerfield has all of the leverage.

For the week ending May 18, 2018, Afrezza saw its second consecutive week with scripts above 500. These latest numbers show a jump in new scripts to a tie with the previous record high of 295. The caution that investors should be aware of is that the next set of numbers will include a major holiday. 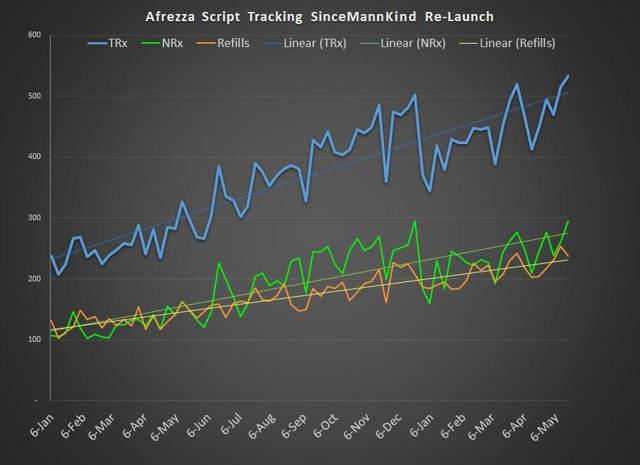 The good news is that MannKind is getting closer to my aggressive projections. The bad news is that even if the company meets my projections, it will fall short of meeting its guidance and will not be at a level that is very impressive to the Street. As time passes, the projections I have outlined will get more challenging. 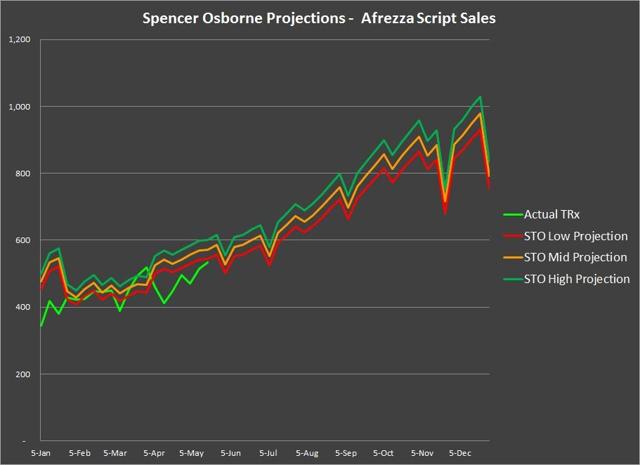 Sales and revenue are tracking a bit below my projections, but within striking distance if the company can execute. The average retail sales per reported script are maintaining the range in the mid $1,200s for 5 weeks now. Outside of a price increase by MannKind, this number should remain stable through the balance of 2018, as the company has not announced any new packaging.

At this stage we have seen 38.46% of the year passed. I estimate that the company has accomplished 26.68% of my projected net revenue for the year. My model was built in an assumption of the company being more efficient than in the past with retail to gross adjustments as well as gross to net adjustments. 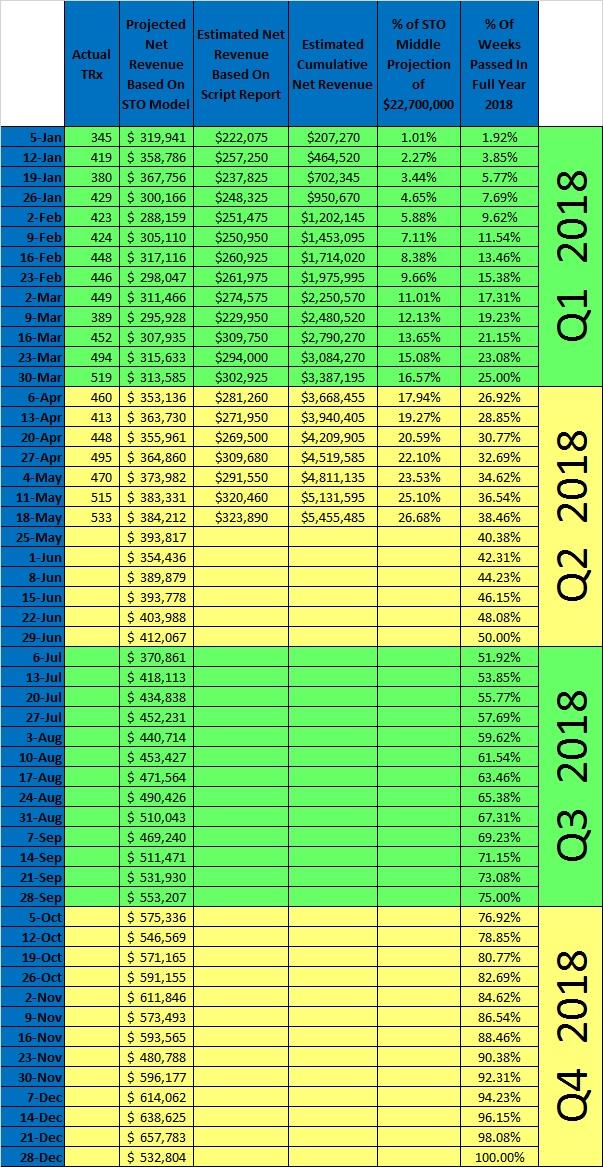 The low end of MannKind’s guidance is the company hitting $25 million in net revenue from Afrezza sales this year with cash burn between $90 million and $100 million. In the past I have discussed how challenging this guidance is. The company has to see scripts grow very aggressively for the remainder of the year to attain its guidance. If you were of the opinion that the scripts will hit a hockey stick, then you will be able to see very clearly whether or not that is happening in the next few weeks. 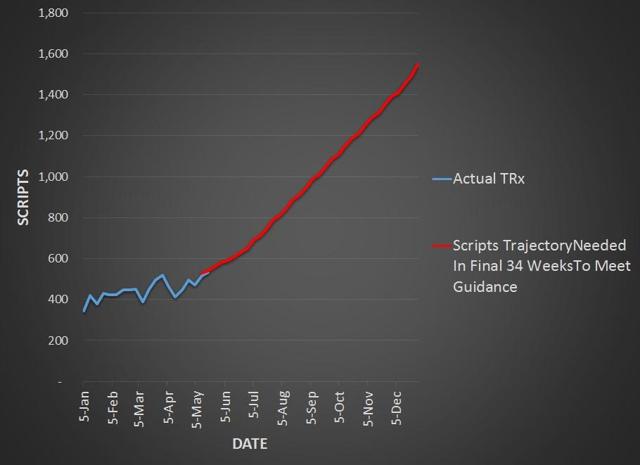 The chart below shows the track that would be needed when guidance was originally given. Because the company has been selling Afrezza slower than would have been needed when it was initially given, the growth curve is getting steeper each week as seen in the chart above. 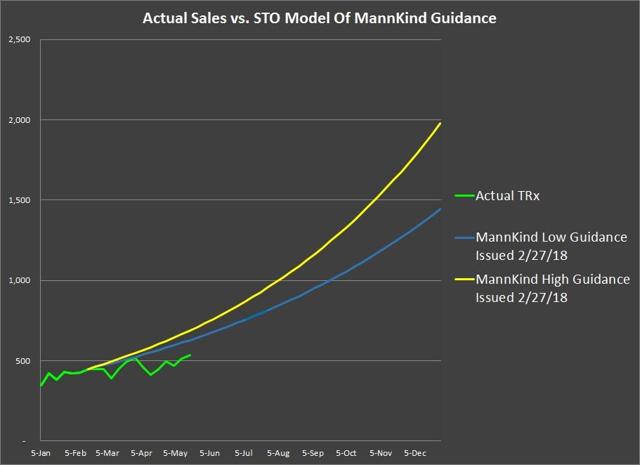 Boiling the guidance down to dollars, we have just over 38% of the year passed with the company being about 22% of the way to meeting its low end of net revenue on Afrezza sales. Looking at the chart below, you can see that the company is losing ground with each passing week. MannKind feels that the second half of the year will deliver the goods, but as yet, I do not see the Street as really believing that this is possible. 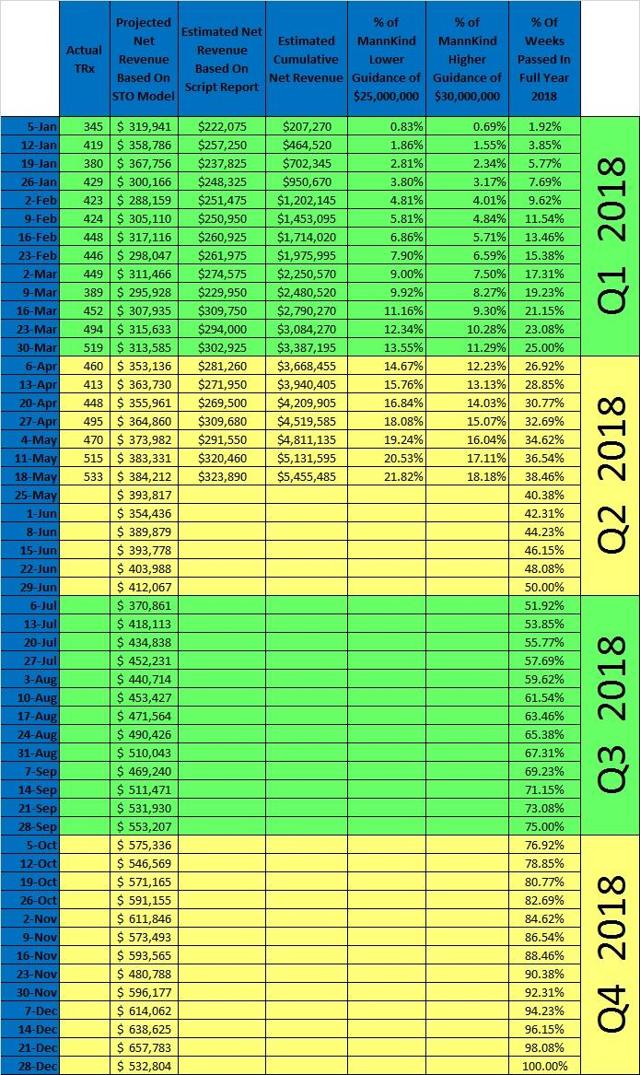 The quarter-over-quarter numbers are less impressive than many would like to see. Thus far, Q2 of 2018 is progressing at 16.25% better than what was delivered in Q1, which the company said was “seasonally soft.” Beating “seasonally soft” by just 16% is not something that instills confidence to potential investors. The company is making progress, but it is slow. Slow progress with low cash should be a chief concern of any investor. 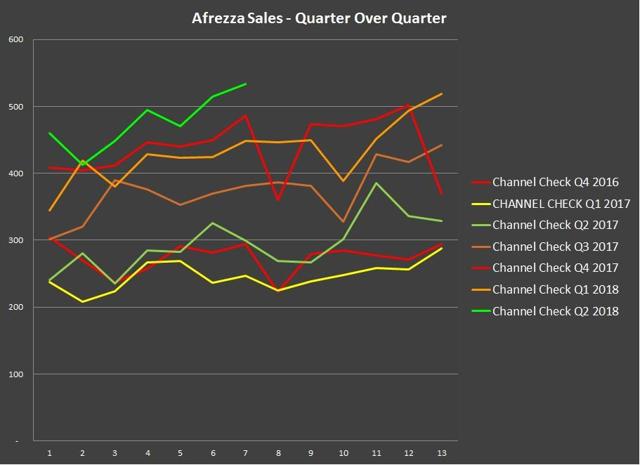 The year-over-year numbers present MannKind with the best talking points. That being said, those talking points are a bit shallow when you start to consider the difference in packaging between the two years, as well as the transition to a new sales force a year ago. Savvy investors will dig deeply into these metrics, whilst less sophisticated investors will focus on what appears to be an impressive number. The issue is this. Impressing less sophisticated retail investors is not something that is really needed. Impressing deep pocketed institutions is what MannKind needs. Those deep pockets are more market savvy. 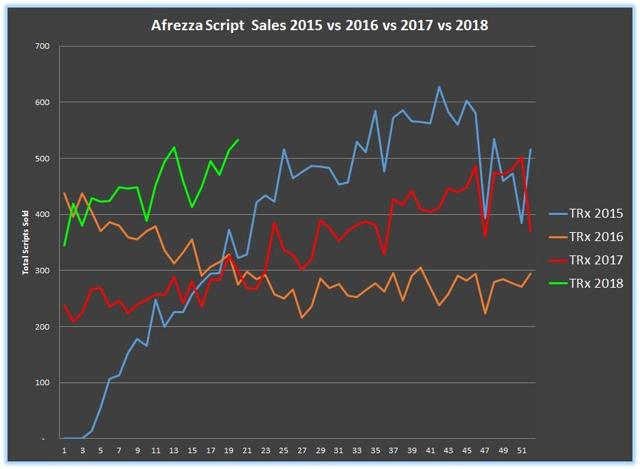 This week I am going to post two cash charts. The first chart shows cash and assumes the use of shares to handle debt issues. The second chart assumes that shares will not be used. Why is this important? It is important because the news discussed at the beginning of this article shows, in my opinion, that getting Deerfield to the table about using shares is not easy. The option to accept shares for debt is Deerfield’s option. The deal also has the use of shares at a price point substantially higher than where the equity is trading at. The warrants that the company gave to the buyers of the last offering are actually more toxic than many may realize. They could effectively cap the share price below the level at which the company can use shares to pay Deerfield debt.

If shares are used, this company has enough cash to get to almost year end, but would fall out of compliance with Deerfield covenants in Q3. Simply stated, it is clear that the company needs to find about $25 million just to get to year end. If shares are not able to be used as currency, the company finds itself running out of cash at the end of Q3 as well as compliance with the covenant.

Essentially MannKind has about 8 to 10 weeks to figure out a way to address the Deerfield issue. As each week passes, the leverage that Deerfield possesses gets stronger. See the charts below: 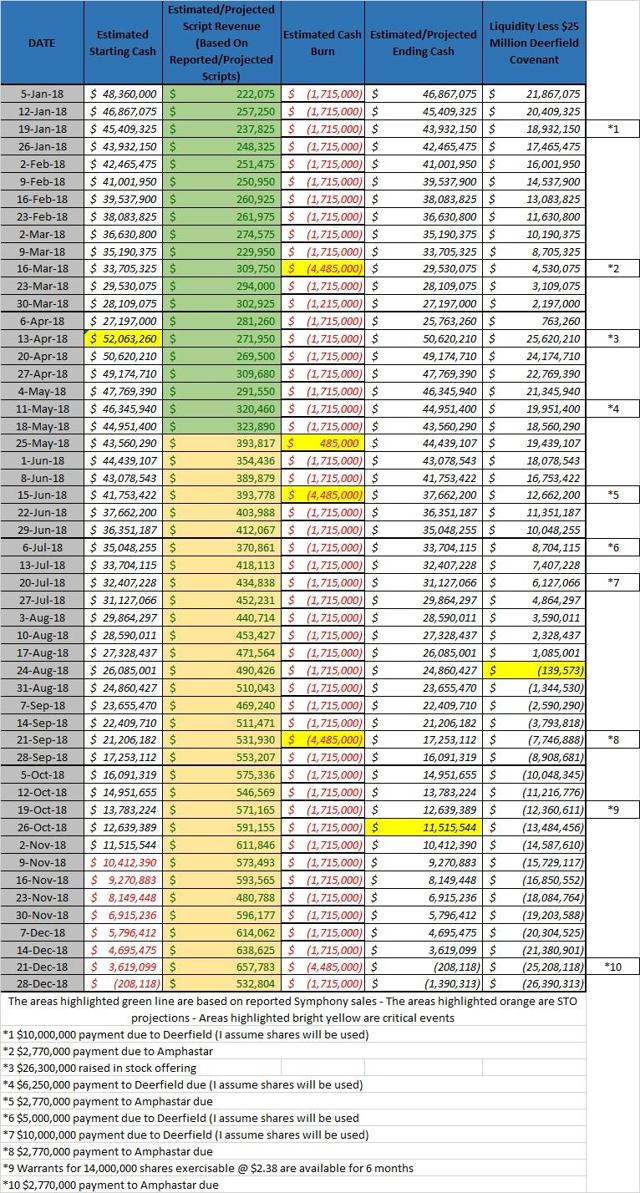 MannKind remains a speculative play. The bulls want to look at the sexy story of the ADA conference and that the company is confident. The bears are looking at the slower-than-needed growth, the lower-than-needed cash, and the challenges that are substantial. The company is attempting to make the right moves, but lacks the dry powder in the form of cash to make compelling shifts. Small positives do not really shift the story much, especially when there are several small negatives that offset those positives. This stock is in the middle of a trading range, and that is to the advantage of active traders. The numbers MannKind is putting up do not put any urgency in the Street to get bullish at this stage. Savvy investors will look at Q2 and determine from there whether MannKind has any reasonable shot at compelling growth. Stay Tuned!