Alteryx, Inc.(NYSE:AYX) reported its first-quarter results on May 9, and the company saw its sales increase 50% year over year to $42.8 million. The data analytics platform specialist had a GAAP loss of $0.09 per share, compared to a loss of $0.22 per share in the year-ago quarter. 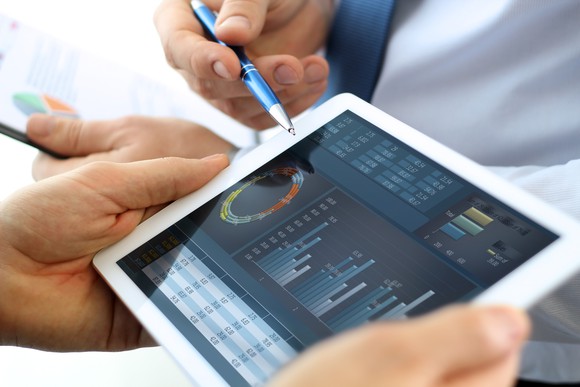 What happened with Alteryx this quarter?
Alteryx ended the quarter with 3,673 customers, a 43% increase from the year ago. Some of the company’s newest clients include 3M, Intel, Merck, and Under Armour. The company’s management noted that its dollar-based net revenue retention was 132%, which means Alteryx’s customers are sticking around and increasing their spending. Alteryx grew its global footprint in the quarter and opened up offices in Singapore, Tokyo, and Paris, and now has 629 employees worldwide. The company also purchased an Australia-based distributor and said that it would build out the existing team with more sales and other staff in the country. International revenue was $11.4 million, up 92% year over year, and now represents 27% of the company’s top line. Alteryx’s gross margin rose to 90%, up from 84% in the first quarter of 2017. Alteryx ended the quarter with cash and cash equivalents of $205.7 million and generated $12.1 million of positive cash flow from operations in the quarter.

CEO Dean Stoecker said on the call with analysts that the company’s first year since going public has been “tremendous” and noted that the company is already delivering on some of its strategic goals through its expanding services. He said:

Since our IPO in Q1 of last year, our trailing 12-month revenue increased 52%. We have grown our headcount by more than 150 people to 629 employees worldwide. We’ve expanded our customer base by more than 1,100, while also maintaining industry-leading net revenue retention rate.

One key area of management’s focus on the call was Alteryx’s international expansion.

“We also took steps in Q1 to further extend our presence globally, making several key investments and announcements. We know the demand drivers for our platform internationally are strong, and we are increasing our investments in select geographies to build a foundation for our growth throughout Europe and Asia,” Stoecker said.

The international expansion is important to note because the company nearly doubled its international revenue in the first quarter and sales outside of the U.S. now account for more than one-quarter of Alteryx’s revenue.

Alteryx’s management is expecting GAAP revenue in the second quarter between $43 million and $44 million, which would represent a 43.5% year-over-year increase at the midpoint. Management also said that next quarter’s non-GAAP net loss per share will be in the range of $0.10 to $0.11, compared to $0.09 in Q2 2017.

Ateryx’s management also raised its sales guidance for the full 2018 year to a range of $183 million to $186 million, which would be a year-over-year increase of 40% at the midpoint. The previous full-year sales guidance was between $176 million and $179 million.

The company’s strong sales and customer growth in the first quarter has given Alteryx’s management increased confidence heading into the rest of the year. “We intend to manage the business with a reasonable, balanced upgrowth and profitability and continue to expect to generate positive cash flow from operations again in 2018,” CFO Kevin Rubin said.