Apple (NASDAQ:AAPL) is a hugely successful technology company, generating more revenue and profit in a single quarter than most technology companies could hope to generate in an entire year. That success has been built on the back of a string of category-defining product launches and Apple’s strong execution in staying a step or two ahead of hungry competitors.

History is replete with examples of technology companies that once generated vast sums of revenue and profit, only to either cease to exist or become shadows of their former selves. Sometimes, these companies were disrupted by smarter, more agile competitors that changed the rules of the game, and in other cases, poor management simply couldn’t keep the momentum going. 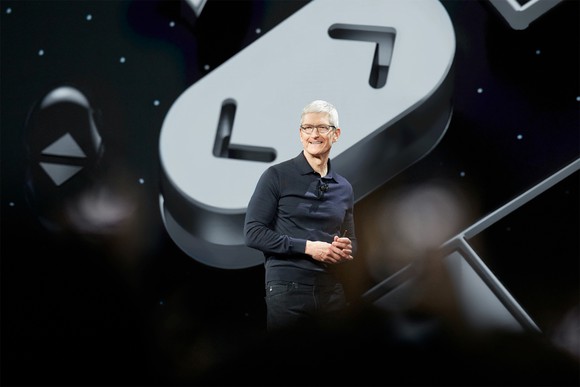 One way that Apple tries to avoid such a fate is by investing heavily in research and development. Last quarter, the company once again increased these investments. Let’s take a closer look at that.

During Apple’s most recent quarter — that’s the second quarter of Apple’s fiscal 2018 — Apple spent $3.378 billion on research and development expenses. This represented an eye-popping 21.7% year-over-year increase. During the first half of fiscal 2018, Apple’s research and development spending was up 20.1%, so the rate of growth actually accelerated a bit during the second quarter compared to the first.

Those increases, Apple explains in its most recent quarterly filing with the Securities and Exchange Commission, were “driven primarily by increases in headcount-related expenses and material costs to support expanded R&D activities.”

Apple says that it “continues to believe that focused investments in R&D are critical to its future growth and competitive position in the marketplace, and to the development of new and updated products and services that are central to the Company’s core business strategy.”

Apple doesn’t provide a specific breakdown as to where it’s allocating those incremental investments, but Apple has given investors a reasonable amount of of guidance into how those investments are distirbuted. Let’s take a look.

From a big-picture perspective, I think it’s safe to say that things haven’t changed much since my fellow Fool.com contributor Evan Niu examined what CFO Luca Maestri had to say about Apple’s continued research and development spending increases.

In a nutshell, Apple’s portfolio of products within the company’s current product categories is getting broader, it’s offering a wider range of services and needs to continue to invest heavily in those to make them more competitive, it’s bringing more technologies (such as displays and chip technology) in-house, and it’s working on all-new product categories. 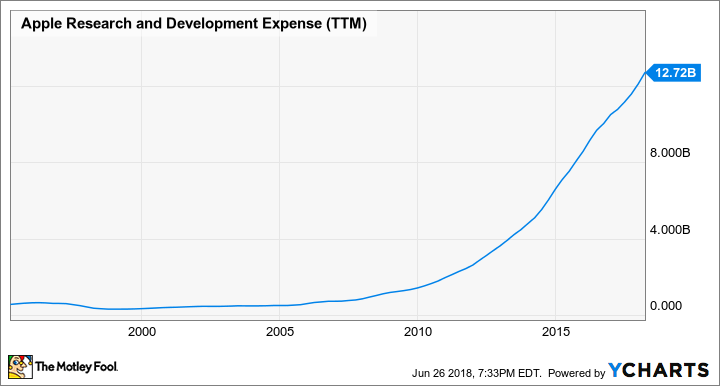 For Apple to simply run in place, it’d need to see some level of R&D growth as employees receive raises and simply iterating on the current product lines and technologies gets more expensive as complexity balloons. However, running in place isn’t enough for Apple to truly thrive over the long term.

Broadening the scope of its current product categories drives costs up, but in return the company stands a good shot of defending its current share and potentially even taking share within those categories. On top of that, Apple’s investments in broadening and deepening its current products could yield higher average selling prices (a great example of this is the innovation that went into the iPhone X, which helped to drive significant iPhone average selling price growth), ultimately boosting revenue and profitability.

Broadening the number of services that it offers as well as making them substantially better allows the company to not only open up new sources of revenue, but it could also encourage Apple customers to stick with its products, which helps Apple maintain robust sales of its current products.

Beyond that, Apple bringing an increasing amount of technology in-house allows it to build more differentiated products with unique innovations that aren’t available to any other company — at least for a time. And, by the time those companies get around to mimicking Apple’s unique features, Apple will have, presumably, moved on to the next big innovation that the competition will have to replicate.

And, finally, Apple needs to be working on next-generation product categories. They can be smaller deals, like new accessories (e.g., AirPods, HomePod), or they can be much bigger deals, like the Apple Watch. Not every one of these new categories is going to be a smash hit in the mold of the iPhone, but if Apple can regularly bring out reasonably successful new categories and invest heavily in them, the aggregate revenue from these categories should become quite substantial.

Apple has shown that it’s a good steward of its shareholders’ capital — it invests substantially in research and development, but over the years, it has had a lot to show for it. I think investors should ultimately applaud Apple’s willingness to continue to increase its spending because it’s the investments that Apple makes today that’ll fuel tomorrow’s business performance. And right now, Apple seems to be investing at a rate that gives the company a great shot of having a bright future.