One of the leaders in authorizing retail marijuana sales four years ago, Denver is planning to commit a share of the tax collections to building affordable housing, an increasingly scarce commodity. That is a shift for the booming Colorado capital, which has so far only used the portion not already earmarked to cover one-time costs — like paving roads — amid uncertainty about how big the business would become.

But Denver has seen the tax collections from the nascent industry climb steadily, rising by 45 percent since 2015 to more than $44 million. That provides a glimpse of what may turn into a fast-growing source of funds for governments nationwide, with the sales of legalized cannabis expected to hit $75 billion by 2030. Some form of marijuana consumption is legal in 29 states. Nine allow sales for recreational use and Michigan voters may decide to follow suit in November.

“As the cities and states have more experience in this situation, you’ll see them begin to leverage these dollars,” said Denver Mayor Michael B. Hancock.

The Denver milestone shows the promise for the industry, which has been restrained by the federal designation of the drug as illegal, limiting businesses’ access to financial services. As more municipal governments authorize sales, there would be more momentum to work around the federal obstacles, said Justin Cooper, co-chair of the public finance practice at Orrick Herrington & Sutcliffe LLP, the biggest municipal-bond law firm. He said it’s "inevitable" that municipalities will issue debt backed by the tax collections.

“Once you have access to the banking system and a revenue stream that’s measurable and being collected, it’s going to take four seconds for an elected official to say, how about we borrow against it and get the money now,” he said. 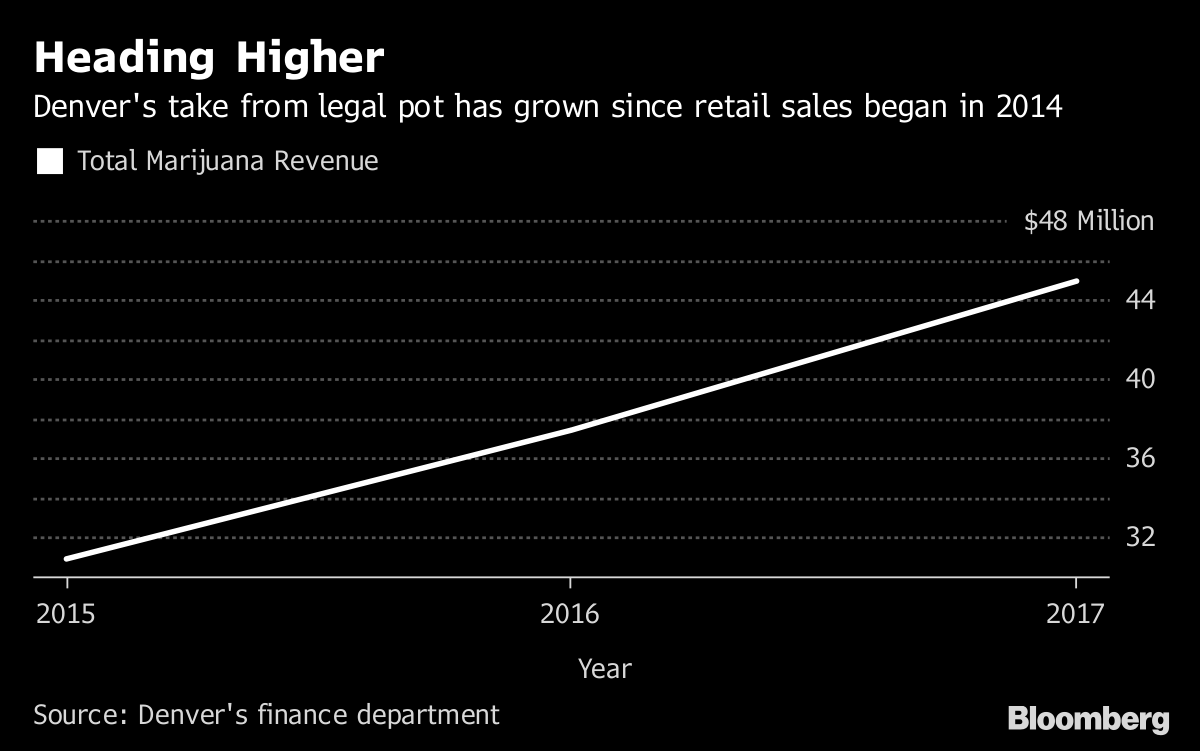 That would be a boon to Wall Street. Underwriter Jefferies Group floated the idea in a presentation to the California treasurer’s office last year, saying it could pose a way to tap a "potential source of significant revenue," according to the document released to Bloomberg News in a public-records request. Jefferies spokesman Richard Khaleel declined to comment for this story.

Others are tamping down expectations. Much of the revenue Denver and other governments collect from cannabis flows to various programs earmarked under local statutes, such as enforcing marijuana laws. That’s one reason the revenue makes up such a small share of the general funds of states and cities, Moody’s Investors Service said in a report Tuesday. And if more states legalize recreational use, the growth in marijuana collections may slow, the company said.

But Mayor Hancock said he’s confident that the revenue will continue to come in. His administration has proposed raising the tax on marijuana sales by 2 percentage points to 5.5 percent, with the proceeds from the increase — estimated at $8 million a year — going to a fund for affordable housing. The city would also allocate $7 million annually from its general budget, while Denver’s housing authority would issue $105 million in bonds backed by property tax revenue. The funding increase would accelerate the construction of 6,400 housing units in five years.

Elsewhere on the state level, officials are pushing ahead to provide the cannabis industry access to services other companies take for granted. In California, where recreational retail sales began this year, lawmakers are weighing whether to create a special bank for the industry so businesses can make deposits and write checks instead of dealing solely in cash.

"At some point, the business is going to be big enough and significant enough that the public safety and revenue loss issues arising from it being all cash will become so overwhelming that it can’t be ignored,” said Cooper, the attorney with Orrick. "It is a legitimate area of future growth."

— With assistance by Jennifer Kaplan