Interest rates are rising, making debt much more expensive for capital-intensive industries across America. But there’s at least one exception: the solar business.

While the cost of borrowing has been increasing since 2016, some banks are taking a smaller cut to win deals from solar developers. Loans of seven years or longer can be obtained for 137.5 basis points over the benchmark London Interbank Offered Rate, or Libor, down from as much as 200 basis points last year, said Keith Martin, a project-finance attorney at Norton Rose Fulbright LLP. Even the higher-rate loans for residential projects are getting cheaper.

“Investor confidence has increased, causing debt costs to fall despite rising interest rates,” said Ed Fenster, executive chairman of Sunrun Inc., the largest U.S. residential-solar company. “Our spreads are coming down faster than the base rate is increasing.”

U.S. solar installations are expected to increase after a down 2018 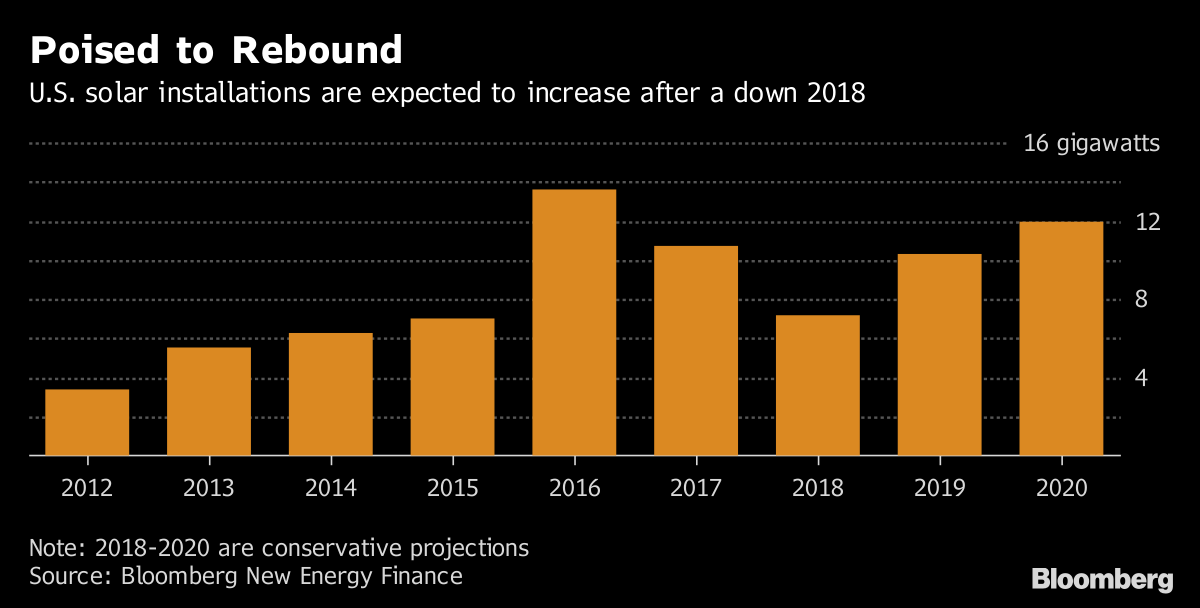 More than $200 billion has been spent in the U.S. on utility-scale solar farms and residential systems over the past decade. Many projects were funded when interest rates were near zero in the years following the financial crisis. After a dropoff in the past two years, installations are expected to increase in 2019 and 2020, according to Bloomberg New Energy Finance.

Generating capacity from solar units has increased 20-fold since 2010. Including wind turbines and hydropower generators, renewable energy now accounts for 10 percent of U.S. electricity supply, government data show. New technologies and cheaper equipment are reducing the cost of such projects, many of which obtained long-term sales contracts with utilities that locked in revenue to help repay loans.

To be sure, borrowing costs are rising as the economy shows signs of strength following a long recovery from the 2007-2009 recession. After seven years of interest rates near zero, the Federal Reserve has raised them six times since 2015 to 1.75 percent last month. Three-month Libor was at 2.36 percent, compared with 1.15 percent a year earlier.

Investments in solar projects last year fell to $19.8 billion from $25.2 billion in 2016 and $31.8 billion in 2015, according to Bloomberg New Energy Finance. Part of the dropoff reflected the government’s surprise decision in 2015 to extend a federal tax credit, which slowed the rush to complete some projects and dampened deal flow. The threat of tariffs on imported parts also led to some delays in 2017.

With fewer energy and infrastructure projects available, the competition among lenders has only intensified because solar’s prospects remain mostly sunny. Solar panels are becoming a more mainstream source of electricity as states seek to limit emissions from fossil fuels like coal or natural gas linked to climate change. Installations will rebound to 10.3 gigawatts in 2019 and 12 gigawatts in 2020, compared with 7.2 gigawatts this year, Bloomberg New Energy Finance estimates.

More lenders are seeking U.S. deals, especially Asian banks that want to diversify their portfolios. Some based in South Korea and Japan are finding better margins in U.S. solar than in investments at home.

“There’s more money chasing this market than ever before,” said Mike Pepe, New York-based managing partner of broker-dealer GrandView Capital Markets LLC. “Many invest in solar even though the yield is low because they perceive that they won’t lose their principal.”

For an outlook on solar energy in 2018, click here.

As recently as February, short-term construction loans for solar projects were offered at 80 basis points over Libor, down from 100 basis points a month earlier, according to Martin at Norton Rose Fulbright.

Such favorable debt pricing has muted “what should otherwise be a punishing rate increase” for an investment-hungry industry, said Richard Matsui, the chief executive officer at KWh Analytics, a solar risk-management firm in San Francisco.

While the main draw for lenders are large solar farms with long-term contracts to supply electricity to utilities, more banks are stepping in to provide financing to pools of residential units backed by power-purchase agreements with homeowners. For example, San Francisco-based Sunrun closed a refinancing deal for rooftop installations last month at a lower rate over Libor than initially arranged.

— With assistance by Jeannine Amodeo