As a long-term resident of Spain, British ex-pat John Barlow had no hand in his country’s decision to leave the European Union. That doesn’t mean he’ll escape the consequences.

Like thousands of British retirees living in European Union countries, Barlow, 72, could lose access to his private pension unless U.K. and European negotiators reach a deal that allows the payments to continue after Brexit. With less than a year before the official exit date, the two sides haven’t even started discussing the issue of cross-border financial services, leaving pensioners like Barlow unsure about the future.

“I rely entirely upon these pensions,” said Barlow, who has been living in Madrid for 36 years. “If the pension payments stopped, I’d have to sell the house in Madrid and live on the proceeds.”

People over 65 living on both sides of the Brexit divide 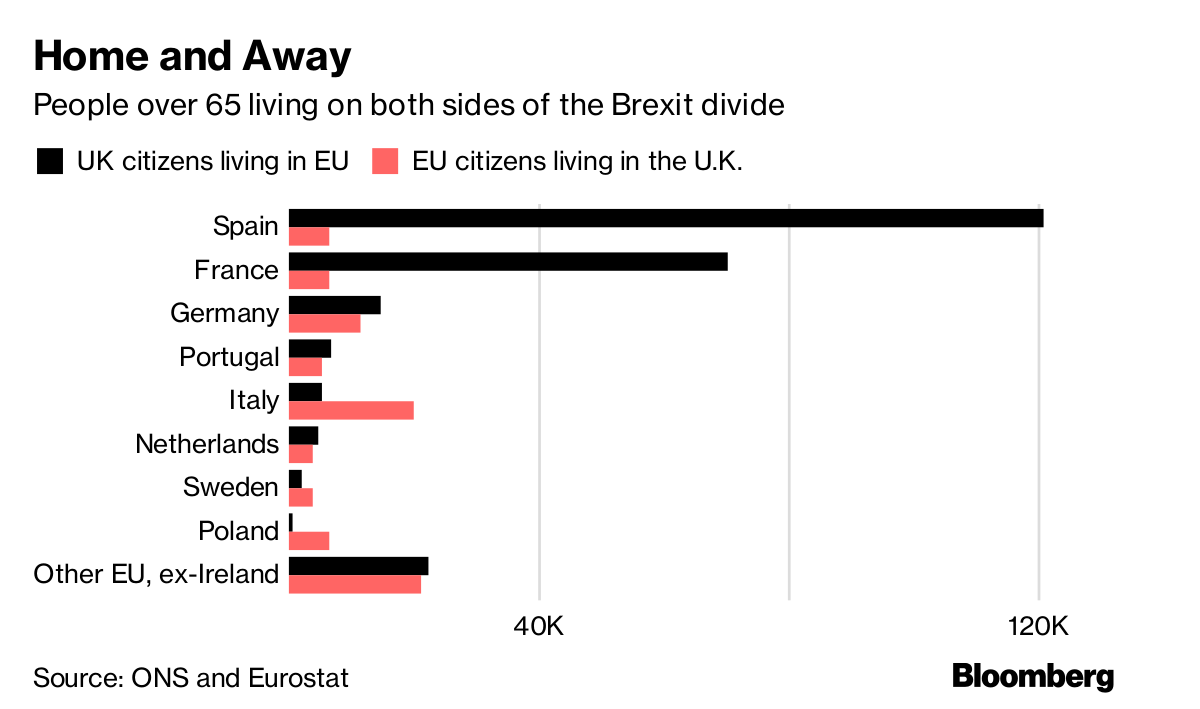 There are 38 million people living in Europe outside Britain who have policies with U.K. insurers, according to Nicky Morgan, chair of Parliament’s Treasury Committee. That includes many expatriates with private pensions who are covered under so-called passporting rules for financial companies that probably won’t survive the cut after Britain leaves. Spain hosts the greatest number of U.K. citizens over 65, followed by France, according to data compiled by ONS and Eurostat.

Without a deal, insurers and pension providers would be legally barred from sending out payments, leaving policies dormant on their accounts. The government of Prime Minister Theresa May currently isn’t even pushing to retain passporting rights after Brexit and U.K. financial companies have largely given up hope that it will be part of a final deal.

While a transition period that lasts until December 2020 should provide more time for the U.K. to redefine its trading relationship with the EU, pensions are likely to get caught up in the contentious debate over access by British financial companies to European markets.

“It’s not clear whether payments could still be made if we have a cliff-edge,” said Mathew Rutter, insurance advisory partner at DAC Beachcroft LLP. “It’s actually down to the laws of each individual member state.”

State pensions aren’t dependent on the same passporting rules to operate, so Brexit doesn’t pose the same risk to those payments.

Under any scenario, pension and insurance companies are looking at a costly regulatory headache that’s likely to stretch out for years. Contracts such as life policies and pension plans are problematic because they can last decades and run past the end of the expected Brexit transition. That means thousands of legal documents would have to be rewritten.

"One of the frustrations we have in Brexit preparation is that we could end up spending millions preparing for outcomes that never happen,” said Steve Webb, director of policy at Royal London, a pension provider. “It will get very messy if there’s one set of financial rules inside the EU and another set outside. Obviously we want to go on paying the money we promised to pay.”

One solution for U.K. firms would be to transfer policies to a subsidiary based within the EU. However, such a restructuring would cost millions and involve court processes and legal opinions, according to Webb.

Insurers could end up caught between breaching contracts by not honoring their promises to policy holders or breaking European law by continuing to make the payments.

“No one wants to stop making those payments,” Rutter said. ”It’s just a question whether — among the hundreds if not thousands of things on everyone’s list to resolve as part of Brexit — that gets done in time.”

As far as EU pensioners living in Britain are concerned, the U.K. government has promised to allow insurers from the bloc to continue servicing insurance policies after Brexit, meaning people in the U.K. with pensions from European providers can still receive payments, according to a Treasury committee spokesman. The EU hasn’t reciprocated.

As somebody who estimated the value of insurance claims before his retirement, Barlow knows something about losses. He’s clear about what to call it if the payments stop coming.