Gold traders and investors should be worried — gold-market timers have become extremely bullish. Gold timers on balance are more bullish today than on more than 96% of the trading days since 2000.

That doesn’t bode well from a contrarian perspective. To be sure, contrarian analysts were worried about gold several weeks ago, the last time I devoted a column to gold market sentiment. Yet gold bullion
GCG9, -0.19%
has gone up about two percent since then.

But one misstep is not a reason to give up on contrarian analysis. Far more often than not over the past two decades, gold has struggled whenever gold bullishness was as extreme as it is now.

Consider the average recommended gold-market exposure level among a subset of short-term gold timers tracked by the Hulbert Financial Digest (as measured by the Hulbert Gold Newsletter Sentiment Index, or HGNSI). It currently stands at 68.8%, as you can see from the accompanying chart. That’s nearly three times this index’s average level since 2000 of 24.7%. 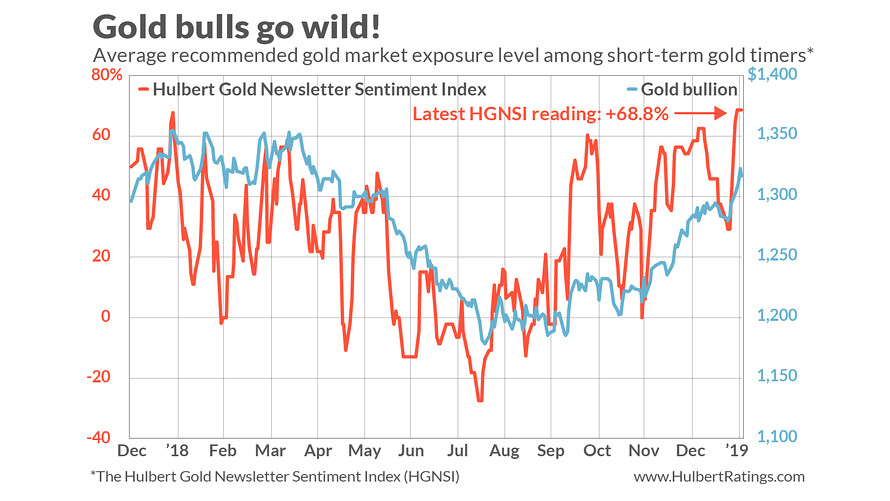 These statistics confirm my anecdotally-based hunch that exuberance is building in the gold pits. Despite a pullback on Monday of this week, for example, gold traders were quick to remind clients that they still expected gold’s rally to resume and for the yellow metal to take out 2018’s high.

To appreciate why contrarians are worried, consider the performance of the VanEck Vectors Gold Miners ETF
GDX, -0.35%
, which is the gold mining stock ETF with the greatest assets under management. The table below shows the GDX’s average performance subsequent to the highest and lowest 5% of HGNSI readings since 2000. Notice that the GDX on average performs far worse following the highest readings.