Given its valuation, Under Armour (NYSE:UA) (NYSE:UAA) is still a risky stock here, but the first quarter 2018 financial results were released earlier this week, which weren’t as bad as many thought, and the resulting price action gave the bulls some hope.

The reversal in the share price on the morning of the report was the first positive: the initial reaction to the Q1 ’18 earnings report was that the stock rose 2.6% pre-open, and then fell 6% during the conference call (trading down near $17), and then once the NYSE opened and general trading began, UAA rose steadily all day, finishing within $0.10 of its high and closing over $18.

It doesn’t seem like much, but technically-inclined investors will tell you that is far better action than the opposite on a company reporting a strong quarter.

However, let’s look at the numbers:

2018 and 2019 revenue estimates have also seen a slight uptick in revenue estimates after the Q1 ’18 quarter. Although the sequential increases are small, it is the reversal of the long-prevailing negative trend that gets attention.

Margins: To avoid putting readers into a financial coma, Under Armour’s “earnings preview” covered the trend in Under Armour margins, and investors also saw a slight improvement in operating and net margins, with continued pressure on gross margin. (See the earnings preview for the margin trends table.)

The important aspect to note in UAA’s margins is that the operating margin peaked in 2014 at 15%-16%, and has been under pressure for 3 years since, but now looks to be stabilizing.

Morningstar has a target of a 9%-10% operating margin assumption in their $20.50 intrinsic value Under Armour estimate.

Under Armour “Outrunning their Financials”

I’ve used this expression several times in the last few Under Armour articles and it should be explained to readers.

As an investor/financial analyst by training, one of the best parts of my work is building spreadsheets on companies and then tracking the financials, the consensus earnings and revenue estimate trends and ultimately the valuation of individual companies over long periods of time.

Clients never owned Under Armour during the halcyon days of 2014-2015, when the stock was trading in the $40s and $50s because at that time Under Armour was generating negative “cash from operations”. Part of the reason for that was that Under Armour’s business was seasonal, i.e., the 4th quarter of every year was the big cash flow generator and the other reason was that inventory was growing rapidly, and while working capital always looked sufficient, inventory jumped to 80%-90% of working capital by early 2016. (There are other ways to measure this such as inventory turnover, and the “quick ratio” which is current assets less inventory, divided by current liabilities, and some of these metrics can be distorted by licensing and “direct-to-consumer”, not to mention the Connected Fitness business, but the lack of meaningful cash from ops, and also free cash flow generation, told me that the growth pedal was clearly pressed to the floor to keep up with the demand.)

The point being that with Under Armour’s “hyper-growth” period now over, and the company prepared to settle into a more normal period of revenue, and cash flow growth, I do expect the statement of cash flow to reflect more normal operations of a $7 billion market cap company.

The fact is adidas (OTCQX:ADDYY) generates about 1.0-1.5 billion euro in free cash flow per one sell-side report, and Nike (NYSE:NKE) – well – Nike consistently generates $2.0-$3.0 billion in free cash flow per year (sometimes more) and Nike’s balance sheet is quite solid with just $3.5 billion in term debt, with the point being that Under Armour has nowhere near the safety net that this kind of credit and cash flow protection provide. (More on this under “Valuation”.)

It’s clear in hindsight that the resurgent adidas, not to mention Nike’s continued dominance, and the collapse of the “footwear” product line the last 4 quarters brought Under Armour’s hyper-growth to a screaming halt.

Here is the y/y growth of Under Armour’s primary product lines the last 8 quarters:

Footwear is roughly 25% of Under Armour revenue, and growth has slowed to close to no growth. The HOVR is an eagerly anticipated shoe release for Under Armour which can hopefully make up for the seeming collapse of the Curry line.

Apparel is still 2/3rds of revenue and it too has slowed the last 4 quarters, although with Q1 ’18, apparel grew at high single digits for the first time since mid-2017.

The big issue is whether HOVR can be a success in late 2018, and whether the Curry line is permanently disabled. (As a fan of Kevin Plank, the public dust-up between he and Stephen Curry over the 2016 Presidential election was unfortunate, but Kevin has right to vote for whomever he wishes, as does every American. My guess is Kevin Plank will rethink any public discussion of politics going forward, since consumers can be from both sides of the aisle. One famous quote supposedly by Michael Jordan during the heyday of his brand, on why he assiduously stayed out of politics, and public political comments, was his famous line, “Republicans buy shoes, too.”).

Just looking at the first table’s PE ratio will tell you that Under Armour is an expensive and risky stock. Looking at 3 different research reports after UAA’s earnings report this week, the various target prices range from $9 (Canaccord) to $24 (Jefferies) with a few others in between that range.

The drop in the stock from the low $50s to the $10-$11 area was enough to scare even the most weathered investor.

The two areas of interest for readers should be the gradually declining “capex” which is hopefully indicative of Under Armour taking a more measured and deliberate long-term investment program to grow the business, and the second-to-last column, which is an “earnings quality” test, which shows that cash flow is covering net income (on a 4-quarter trailing basis, finally) for the last 6 quarters.

The declining operating cash flow is somewhat worrisome, but the seasonality to Under Armour’s business and how the business is stacked towards the last half of every calendar year distorts this to some degree.

On a price-to-cash flow basis, UAA is far cheaper today than 2015 and 2016 when it was trading at 80x-90x cash flow and when the cash-from-ops was negative.

The cash flow statement and the balance sheet are starting to show early signs of stabilization. 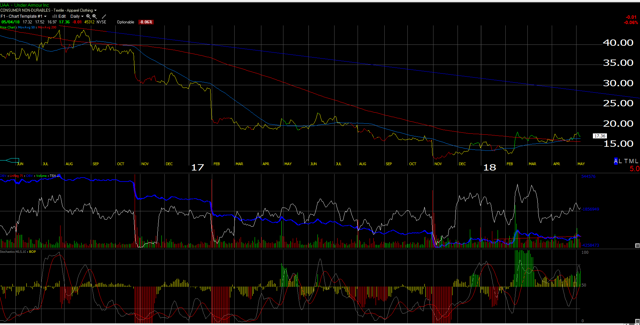 This is a daily chart of UAA, while the earnings preview looked at the weekly chart.

Not being a trained technician, it does look like UAA is trying to put in a longer-term bottom on the charts, but I bet the stock chops around for a few months.

The stabilization of the North American market, and the possible slowing of adidas’s progress to gain US market share (one sell-side analyst thinks that the adidas market share grab has peaked already) are positives for Under Armour, and for Nike as well.

It’s tough to tell from my perspective what is really happening with the Curry line, i.e., whether there is some longevity with the brand or whether that bridge was burned in 2017. Expectations for the HOVR are high. It needs to be a success for Under Armour.

International is 27% of Under Armour revenue, although the Asia-Pacific geography is the only one of the three areas (Europe, Asia and Latin America) that is profitable. The dollar weakness over the last year has helped UAA, thus dollar strength – and really the speed at which the dollar strengthens – could factor into Under Armour’s results.

The negatives around the business and the stock are already well-known: the valuation of the stock, excess inventory that still needs to be liquidated and that will likely pressure gross margin, the need to re-engineer distribution channels to OMNI and direct-to-consumer (as a regular visitor to the Under Armour Michigan Avenue store in Chicago, you have to wonder how long that store will remain open), and both the willingness and ability to stabilize the business from a hyper-growth state to a more measured, consistent, predictable state.

It may take until 2019, but my own opinion is that the stock could trade into the low to mid-$20s, which with the Friday, May 4th, close in the $17 area provides investors with a 35% discount to what I think is “fair value” for Under Armour.

In Under Armour’s earnings preview, it was disclosed that clients had a 1/2 of 1% position in the stock, but that was lifted this week to just over 1% in terms of the total Under Armour position, and more may be added depending on price action over the next few months.

On an absolute valuation basis, the stock is expensive, so be forewarned, but there is now a lot of bad fundamental news in the stock, and the chart is indicative of a stock trying to form a longer-term bottom.

Disclosure: I am/we are long UAA.