Naysayers keep getting burned by Shake Shack (NYSE:SHAK). The fast-growing burger chain soared 18.4% last week after posting blowout financial results. The heavily shorted stock would go on to hit its highest level since the summer of 2015 on Friday.

Revenue rose 29% to $99.1 million for the first quarter, comfortably ahead of the $96.3 million that analysts were expecting. The major top-line driver was the chain’s brisk expansion. We’ve seen Shake Shack store counts grow from 127 to 168 systemwide units over the past year. Domestic company-owned locations — the beefy component accounting for 97% of its revenue — have increased by 24 to 95 in that time. However, unit-level sales did improve. The 1.7% uptick in comps comes as a relief to investors, as bears have argued that Shake Shack’s expansion will cannibalize sales at existing locations. It’s not happening at the moment. 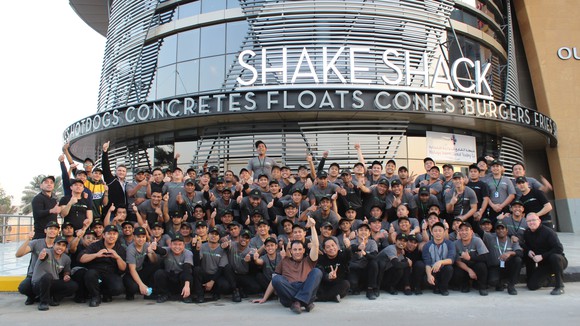 Shake Shack came through with a bigger beat on the bottom line. Adjusted earnings rose 54% to $5.7 million of $0.15 a share, nearly double the $0.08 a share that Wall Street pros were targeting. Operating margin may have contracted as a result of labor, general and administrative expenses, depreciation, and other operating costs outpacing revenue growth, but it all worked itself out on the way to the bottom line. Shake Shack has landed ahead of analyst profit forecasts by at least a double-digit percentage margin for more than a year now.

Shake Shack was able to barrel through analyst estimates even when comps were negative throughmost of 2017. Why wouldn’t it be rocking on the bottom line now that store-level sales have turned positive?

The burger flipper’s full-year guidance is inching higher. Shake Shack now sees flat to positive comps — between 0% and 1% — in 2018, slightly up from its earlier forecast of flat same-unit sales. The revenue goal is now $446 million to $450 million, up $2 million. That revision is actually disappointing, since Shake Shack outperformed analyst top-line expectations by more than that already during the first three months of this year, but the market’s not looking a gift upward revision in the mouth.

A short squeeze likely played a starring role in last week’s rally. There were nearly 7.4 million shares sold short as of mid-April — a whopping third of the public float. Shake Shack’s trading volume isn’t particularly heavy, so the short interest ratio of nearly 14 days makes it vulnerable to a short squeeze when favorable news breaks.

Analysts are jacking up their price targets. Jake Bartlett at SunTrust is boosting his price goal from $54 to $64, encouraged by the quarter’s positive comps despite adverse weather and cannibalization concerns. Even John Ivankoe at JPMorgan, who kicked off this new trading week by downgrading the stock from neutral to underweight, is lifting his price target from $40 to $49.

Ivankoe continues to be concerned about the stock’s valuation despite his high praise of the concept and its management. Shake Shack isn’t cheap. Even with analysts revising their profit projections higher the stock is trading for more than 100 times this year’s earnings multiple. However, Shake Shack’s history since its initial post-IPO pop in early 2015 has been to climb this wall of worry. The stock hasn’t been cheap on the way up, and as long as its fundamentals keep outpacing conservative expectations, it’s hard to bet against that kind of momentum.