China is showing the United States that it will make good on its trade threats.

The Chinese government said that tariffs on about $3 billion worth of US imports are going into effect Monday, hitting 128 products ranging from pork to steel pipes.

It’s the latest move in escalating tensions between the world’s two largest economies, which some experts fear could turn into a trade war.

Beijing says the new sanctions on 128 US products, which it first proposed 10 days ago, are in response to President Donald Trump’s tariffs on imports of steel and aluminum from China and some other countries.

But Trump also has more measures in the works aimed specifically at China. He has announced plans to slap tariffs on about $50 billion worth of Chinese goods following an investigation by his administration into the theft of intellectual property from US companies.

It’s unclear how China will respond to those aggressive measures. The Trump administration hasn’t yet detailed which Chinese products will be affected. For now, Beijing is focusing on its response to the steel and aluminum tariffs.

China’s commerce and finance ministries said in statements late Sunday that authorities are imposing tariffs of 15% on 120 American products — such as fruits, nuts, wine and steel pipes — and 25% on eight other products, including pork and recycled aluminum.

China is upset that Trump imposed the steel and aluminum tariffs on the grounds of national security, which Beijing says is an abuse of global trade rules.

Since first announcing the metal tariffs, the White House has said it will spare a number of allies from the measures, including Canada, Mexico, the European Union and South Korea. 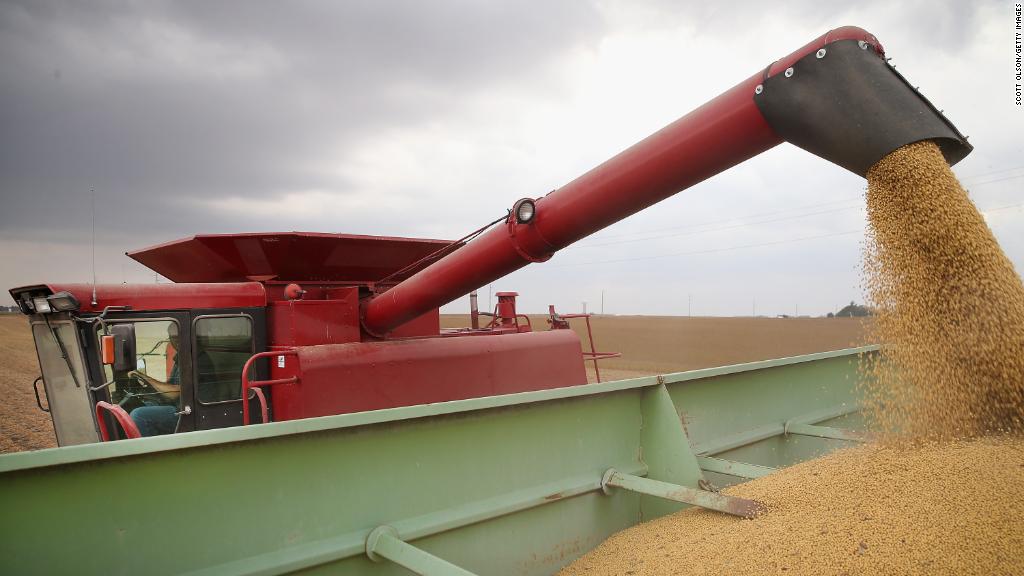 How soybeans could be pawns in a US-China trade war

China’s Ministry of Commerce said in its statement late Sunday that those exemptions “seriously violate” World Trade Organization rules that prohibit members from discriminating against other WTO members.

It said it hoped the US government would withdraw the tariffs “as soon as possible so that the trading of products between China and the United States will return to a normal track.”

China has repeatedly said that it doesn’t want a trade war but has also warned that it will take “firm and necessary” countermeasures to defend its interests.

In an opinion article Monday, China’s official news agency Xinhua warned that Trump’s plans to impose further trade measures on China are a “self-defeating gamble” that will cause harm to the American economy.

“Trump’s planned tariffs are not only going to hamper the United States’ economic well-being and continued progress, and burden its people with higher costs of living, but also pose a grave threat to the current global trading system,” the article said.

Trump has long accused Beijing of stealing American jobs through unfair trade practices. He has promised to bring down the United States’ huge trade deficit in goods with China, which reached $375 billion last year. But economists have cautioned that tariffs are unlikely to achieve that goal and risk hurting economic growth instead.

Top US and Chinese officials have been holding talks in an effort to stop the trade tensions from spiraling out of control. But so far, neither side is backing down.

Experts say they expect further retaliation from China once the Trump administration reveals more details on which products its planned $50 billion in tariffs will target.

Arthur Kroeber, a founding partner at economic research firm Gavekal, predicted in a note to clients late last month that the next round of Chinese measures will focus on US agricultural exports from predominantly Trump-voting states.

China’s approach is to show it’s willing to stand up to the United States but without going as far as seriously disrupting the global trading system, according to Kroeber.

China wants “to position itself as the good guy in the global economy, protecting the rules of the game from Trump’s lawless attacks,” he wrote.