A late day bounce reduced that the damage, but markets still got beaten up again leaving some strategists scratching their heads. 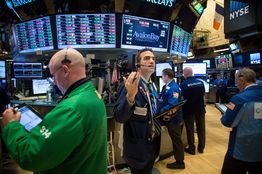 Citigroup’s Robert Buckland and team don’t think we’re in a bear market yet:

We revisit a four-phase cycle for corporate bond spreads and equities. At 6 oclock, spreads turn up but equities keep rising, although with increasing volatility. At 9 oclock spreads keep rising and equities start falling. Its a full-on bear market.

Markets Think Its 10 OClock: The high level of credit spreads and the latest correction in equity prices are typical of the shift through 9 oclock. In this phase of the cycle global EPS contract and momentum trades unwind. Equity investors should sell the dips not buy them.

Spreads Can Send Head-fakes: Credit markets are not always reliable predictors of future equity performance. They gave false sell signals in 1998 and 2011. Thats why we also look at other indicators included in our Bear Market Checklist. Right now, 5/18 are saying sell. At previous 9 oclocks the total was 10+/18.

We Think It’s 8 O’Clock: Its an increasingly lonely stance, but we think that it is too soon to call the move through 9 oclock. We would see the current sell-off as a correction to be bought rather than the beginning of the next sustained bear market. This is more 1998 or 2011 than 2000 or 2008.

Commonwealth Financial Network’s Brad McMillan asks “what the heck is going on in the markets”–and answers his own question:

When I woke up this morning, I checked the markets as I usually do, and my first thought wasparaphrasedwhat the heck? What happened last night to drive Asian and particularly European markets down that hard?

In fact, not much. A couple of European banks disappointed in their earnings reports. That, combined with a general impression that Janet Yellen is much less confident about the global economy than she was last December, seems to have done the trick.

This type of movement is characteristic of markets that have lost confidence. As Ive written before, the pullback were seeing in the U.S. is driven by exactly that. Although unsettling in its apparent randomness, this can (and historically has) reversed once the mood changes. Unlike a pullback driven by economic fundamentals, a confidence-driven pullback typically recovers relatively quicklyon average, in less than a year compared with over two years.

I wish I had more confidence in his call.