“Strong free cash flow” and “oil company” are phrases you don’t often find together in the same sentence. In the past, I’ve cited weak free cash flow — relative to reported net income under GAAP — as the No. 1 reason I refuse to invest in ExxonMobil (NYSE:XOM), despite the fact that Exxon is one of the most recognized names in the world.

And yet, a funny thing has been happening in the market for oil stocks over this past week. All of a sudden, Wall Street analysts are talking up free cash flow as a reason to buy oil stocks. In fact, they can’t seem to shut up about it. Over just the past few days, I’ve seen free cash flow mentioned prominently in the analyses of Wall Street bankers on no fewer than three separate oil stocks: ExxonMobil, Chevron (NYSE:CVX), and ConocoPhillips (NYSE:COP).

Here’s what you need to know. 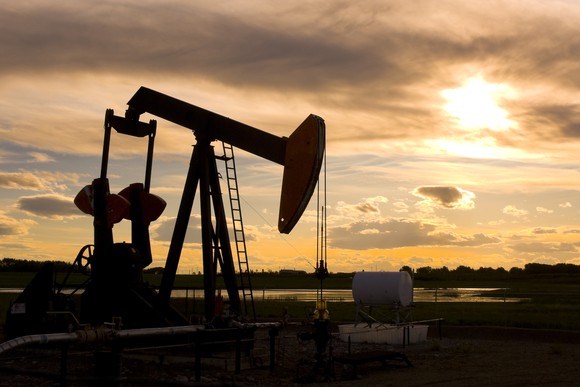 ExxonMobil: The exception that makes the rule

ExxonMobil, for example, is not a horrible free cash flow producer, but it’s no shining star, either. Over the past five years, Exxon has generated a combined $47.6 billion in free cash flow (cash from operations minus capital spending), according to data from S&P Global Market Intelligence. Unfortunately, that’s less than half the $108.8 billion in net income the company says it earned under GAAP accounting standards.

Commenting on the company’s prospects, last week analysts at Mizuho Securities declined to endorse ExxonMobil stock in a note covered on StreetInsider.com(requires subscription) — and free cash flow played a part in its reasoning. Exxon is being forced to take “steps … to correct Tillerson-era missteps,” says Mizuho, and these will require Exxon to spend heavily “to chase Permian volume growth, accelerate Asian LNG, [and] push rapid Guyana offshore megaproject development, just to continue standing still over the next year.”

As a result, Mizuho doesn’t think Exxon will show much production growth before 2020 at the earliest. At the same time, Exxon’s free cash flow will be siphoned away to pay for capital investments — not really a formula for investing success.

In contrast to Exxon, Mizuho saysits “preference within mega-cap energy is Chevron, which has better growth and [free cash flow] dynamics through 2020.” According to Mizuho, Chevron stock that sells for $126 a share today could go to $145 within a year, delivering investors a 15% profit in addition to paying a 3.5% dividend that’s nearly as good as Exxon’s 3.9%.

But even Chevron may not be the best deal in big oil for investors who love free cash flow. Over the past few days, no fewer than three separate analysts have highlighted ConocoPhillips’ strong free cash flow.

The first was Mizuho, praising Conoco for its “visible free cash flow and low sustaining capex.” No sooner had Mizuho pointed this out, though, than Bernstein chimed in, saying that it had “underestimated the investor demand for a strong FCF growth story” and predicting that Conoco stock would gain 17% over the next year, rising to $82 a share (with a 1.6% dividend yield). Now, today, BMO Capital Markets is joining the chorus with a $78 price target and an outperform rating on Conoco stock.

What BMO likes about Conoco

ConocoPhillips boasts a “robust FCF profile” and “competitive near-term production growth,” says BMO. And the analyst agrees with Bernstein that investors are attributing “increased … importance [to] FCF yield” when valuing oil companies like Conoco, Chevron, and Exxon. Looking out 10 years, BMO argues that Conoco should enjoy “low-single-digit production growth” annually, and even if it needs to spend more on capital investment over this period, it should be able to “sustain FCF through the cycle.”

What it means to investors

Investors may be surprised to hear Conoco spoken so highly of on Wall Street. After all, of the three big oil companies discussed so far, Conoco is the only one that’s not currently reporting GAAP profits on its income statement. And yet, Mizuho, Bernstein, and BMO are all right. Conoco is generating decent free cash flow — $2.5 billion both last year and over the last 12 months, according to S&P Global figures, which is a welcome turnaround from the 2014 to 2016 period, in which Conoco burned cash.

That being said, just because Conoco is generating stronger free cash flow than its income statement would suggest doesn’t necessarily mean these analysts are right to recommend the stock. With a market capitalization in excess of $81.2 billion, Conoco stock still sells for a hefty 32.5 times trailing free cash flow, and long-term growth estimates for the company hover around only 6%.

Fact is, when valued on free cash flow, even Chevron (at 27.8 times free cash flow) and Exxon (24.4 times FCF) sell for cheaper multiples to FCF than does Conoco — and they pay bigger dividends, too. Chevron and Exxon may not be cheap, but they’re still cheaper than Conoco stock.

So while I applaud Wall Street’s decision to finally start paying attention to free cash flow in the oil industry, I fear the analysts have drawn the wrong conclusions from what they’re seeing: None of these three companies is cheap enough to buy, Conoco included.