At the intersection of fashion and watches, you’ll find Fossil Group (NASDAQ:FOSL). The watchmaker has established itself as a key brand in the retail niche, but the shift toward more functional wearable devices threatened to take away its key dominance in its core market. It’s taken time for Fossil to develop a workable strategy to fight back, and shareholders have had to suffer while Fossil’s efforts take more concrete shape. Yet last quarter, Fossil raised eyebrows with solid results that suggested a turnaround in the works.

Coming into Tuesday’s first-quarter financial report, Fossil investors didn’t expect to see much progress toward profitability or revenue growth, but they still hoped for signs that the watchmaker is moving in the right direction. Despite some tough results, Fossil’s numbers were a bit encouraging, and they did include strength in the connected watch segment. Shareholders hope that that product line could be the answer to the difficulties the watchmaker has faced for years. 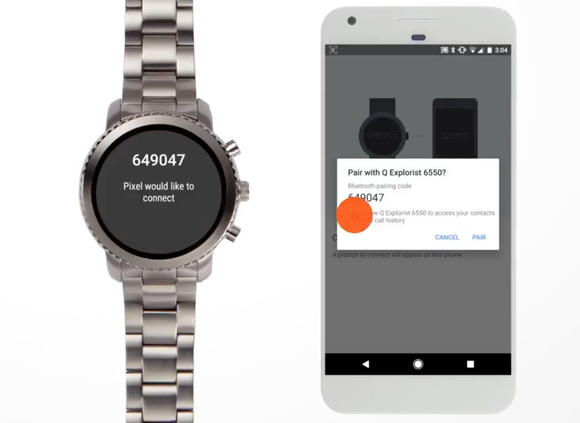 Fossil Group’s first-quarter results still showed some less-than-stellar numbers. Net sales fell 2% to $569 million, but compared to the $539 million in sales that most of those following the stock were expecting, Fossil held up quite well. Similarly, Fossil lost about the same amount as it did during the first quarter of 2017, posting $48.3 million in losses, working out to $0.99 per share. That was worse than the consensus forecast, but it still held up reasonably well for what’s often a slow quarter for Fossil.

Currency impacts played a key role in boosting Fossil’s numbers. Net sales got a $30 million kick higher from the U.S. dollar’s weakness, almost exactly matching the difference between its actual numbers and what investors were expecting. Operating income got a $9 million boost. Without those gains, sales in constant currency would have been down 7%.

From a product-line standpoint, Fossil saw its best performance in its watch segment, where sales were roughly flat. Leathers saw revenue drop 5%, and the jewelry area was the weakest, with a 13% sales decline. The company’s catch-all other category saw sales decline 8%. Yet retail comps were much more favorable, including an overall 5% gain and strong performance in the watch and leather categories.

As we’ve seen before, Fossil did better internationally than closer to home. Asia led the company forward with 9% sales gains, with India, China, and Malaysia doing especially well and offsetting weakness in Japan. Europe posted 3% better revenue entirely due to euro strength compared to the U.S. dollar, as sales in the U.K. and France remained under pressure. In the Americas, 10% sales declines weighed down the entire company, with the U.S. market performing particularly poorly.

What’s next for Fossil?

CEO Kosta Kartsotis tried to find the positives in the report. “We had an encouraging start to the year,” Kartsotis said, “delivering first quarter sales results that were stronger than our expectations.” The CEO pointed to strategic execution and strong design and innovation as key elements of how Fossil has stood up to competitive pressure and will continue to move forward.

The one area where Fossil saw the most success was in the connected watch segment. In Kartsotis’ words, “During the first quarter, connected watch sales nearly doubled,” and the contrast between declines in traditional watches and growth in connected watches showed up clearly across Fossil’s geographical presence. Those trends are consistent with what other watchmakers have seen.

Fossil did make some upward revisions to its fiscal 2018 guidance. On a GAAP basis, sales will likely be down 5% to 12%, which is less extreme than the 6% to 14% drop it previously expected. Pretax bottom line will likely be between a loss of $40 million and a profit of $50 million, up about $10 million to $15 million from its previous projection. For the second quarter, though, sales declines of 4% to 11% and a pre-tax loss of $30 million to $50 million still point to Fossil needing to do more work.

Fossil investors were pleased with the results, and the stock jumped 13% by the close following the announcement, which for some reason was made before trading ended for the day. If Fossil can keep gaining ground on the connected watch front, it could potentially be the strategic answer investors have been looking for.