Having gone through an IPO with an offering price of $29, DocuSign’s (DOCU) share price has skyrocketed more than 50%. A valid question, therefore, is how justified the current price level is from the value perspective.

Being an integral part in the digital transaction management progress, an e-signature solution is at the core of DocuSign’s platform. By promoting ease, speed, convenience, and security of digitally managing and executing transactions, when compared to a traditional paper-based method, the company has become not only a leader in the niche it has helped develop but also a buzzword. The adoption of the US federal ESIGN Act and UETA as well as the passage of laws and statutes internationally (such as the EU’s Regulation No 910/2014, or eIDAS) has had a profound effect on the company’s development, since these laws and regulations ensure that a digital signature is on par with a handwritten one, and, consequently, any digitally signed agreement is legally enforceable.

With DocuSign prominence, a number of competitors emerged, offering either similar or even more competitive pricing plans. A simple “DocuSign” Google search shows such similar firms as SignNow, RightSignature, SignEasy, and AdobeSign. Switching to a study conducted by Forrester in 2016 on e-Signature vendor landscape, DOCU is a clear market leader having a 40% market share, followed by AdobeSign with 15%. Not surprisingly, the pricing structure among these firms tells a similar story, with DocuSign and AdobeSign offering identical plans, while the rest of the group attempts to lure customers with schemes on a lower price level (here, here, and here). It is important to remember, therefore, that DOCU’s leading position is at risk, since its major product offering – an e-signature – is easily replicated with similar scalability, integration, and flexibility features by its competitors.

Since it is essential to have a narrative in valuing any company, the story for DocuSign is that of a leader in the digital signature market, allowing the company to achieve a sizeable share of the potential market and reach impressive operating margins thanks to scalability. Even though a strong brand name will help in maintaining long-term competitive advantage, already considerable and growing global and local competition (due to easy replication) is a serious threat, implying a need for substantial reinvestment requirements to support growth and fend off competition. In terms of risk, as the company grows, the risk will converge with that of a median global company.

Growth – According to two different and independent studies conducted in 2017 on global digital signature market (Stratistics MRC and P&S Market Research), there is a potential to reach $3.2bln (up from $662.4mln in 2016) and $2.9bln, respectively, by 2023. For DOCU, the estimated market size of $662.4 translates into 35% market share in 2016 and slightly above 40% in 2017, which is in line with the abovementioned figure by Forrester. Assuming DOCU maintains its market share at 40%, the 5-year CAGR can be computed to be 22% and 19%, respectively. Given low discrepancy in these figures, it is justified to assume a yearly sales growth rate of 20% over the next five years, which will linearly decline afterwards to a terminal growth rate of 3% (equal to a 10-year T-Note). Profitability – Analyzing any company it is important to understand what constitutes investments into future growth. In the case of a technology company, these are usually R&D items, which are expensed as incurred in accordance with the US GAAP but need capitalization, if to be considered part of the investment activity (which it should). With that idea in mind, the table below provides restated (with capitalized R&D expenses) common-size P&L:

The first thing to notice about the DOCU’s P&L is that a substantial portion of revenues come from subscription fees from its SaaS (software-as-a-service) platform and a lesser share from professional services, which are essentially fees for deployment and integration services for new clients. As the business grows and subscriber numbers rise, professional service slice will continue to fall to a forecast level of 5% of total revenues.

From the cost of revenue side, the company has been generating no gross profit from servicing fees and has enjoyed declining costs from subscription revenues due to scaling benefits. Again, growing revenues and enhanced benefits from the economies of scale will contribute to further improvement in gross margins, with cost of subscription forecast to decline to 15% and cost of servicing levelling off at break-even.

Regarding operating expenses, the same set of conservative assumptions applies, with sales and marketing expenses improving the most, given scaling benefits from higher level of future revenues and less aggressive advertising strategy as the business matures.

All-in-all, the target pre-tax operating margin for DOCU is expected to be around 30%;

Reinvestment – it is assumed that DocuSign will spend $1 for reinvestment purposes for every $2 earned from extra sales. Even though it is a bit more optimistic when compared to a software industry’s average sales-to-capital ratio of about 1.0, it does take into account that the current platform is fully operational and additional investments are largely required for improvement rather than reconstruction purposes.

Furthermore, since the sustainable growth rate is computed as:

Risk – Using market values of equity and debt (see a note on capitalised operating leases below), the following component costs have been computed:

The equity component was calculated using the risk-free rate of 3%, ERP (geographically weighted by sales) of 5.34% and a bottom-up beta of internet software companies of 1.25 levered up by the after-tax D/E ratio. The pre-tax debt component was computed using a prime rate of 4.5% plus an average spread of 3.25% (S-1/A, p.73):

As the company matures and its business risks decline, the WACC of 9.63% computed above will be linearly adjusted downwards after 5 years to a terminal rate of 8.24%, a global median.

Additionally, the following has been assumed:

The table below provides a snapshot of all the variables in play: 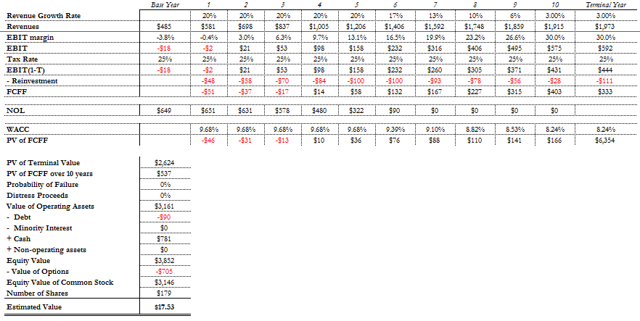 With stock currently trading at about $45 and an estimated value of around $17.5, it seems the stock is significantly overvalued. Given the uncertainty around the assumptions, a Monte Carlo simulation is an excellent tool to see the dynamic of the shift in value per share. This time, however, given a wide discrepancy between value per share and the market price, the boundaries of stress testing the assumptions will be severely relaxed; more specifically, instead of applying various distribution assumptions (such as triangular or normal distributions with low extreme event probabilities of occurrence) for each key variable, uniform distribution will be used, with equal likelihood of occurrence, for revenue (in the range of 15-45% [the upper bound is even higher than 2018 sales growth rate of 39% and slightly below 2017 figure of 52%]), operating margin (20-40%), and reinvestment (1.0-3.0) assumptions.

The simulated value per share distribution is presented below:

Even though the median value of $28.63 is more than 60% higher than my base-case value per share of $17.5, a critical piece of information that this graph and the percentiles table denote is that at the current price of $45 there is more than 70% chance the stock is overvalued.

A word of caution

Even though DocuSign seems to be substantially overvalued based on the simulated distribution above, this is not a clear short recommendation. The reason is that there may be strong market sentiment in this stock, and DOCU may trade above its value for a persistently long time wiping a short-seller out of the market (as has been the case even with some well-known hedge fund managers, such as David Einhorn). Consequently, an “avoid” approach seems to be a prudent decision here than a speculative long or short bet.