The self-driving revolution will eventually generate a $7 trillion “passenger economy.” That wasIntel’s(NASDAQ: INTC) prediction a year agoas the chipmaker and Mobileye-parent sees sweeping effects from the rise of driverless vehicles. By 2035, it said the economic opportunity would be $800 billion, and that global revenue stream would balloon to $7 trillion by 2050.

The opportunity in autonomous vehicles is likely to rival that of the internet and mobile, which led to dominance of tech companies likeApple and Alphabet(NASDAQ:GOOG) (NASDAQ:GOOGL), both of which have been the most valuable company in the world at different moments in recent years, among others. It’s easy to see the benefits from driverless tech, which is expected to lead to a lower accident rate, faster commute times, eliminating the hassle of parking and freeing up space, among other benefits. However, the market seems to be ignoring this opportunity.General Motors(NYSE:GM) andFord(NYSE:F) are still being treated like dinosaurs, while the rise of Alphabet’s Waymo seems to have had no impact on its parent’s market value.

While the market for driverless tech between businesses looks healthy as acquisitions have been frequent, the great potential in autonomous vehicles has yet to impact market values in individual stocks. Let’s look at a few examples. 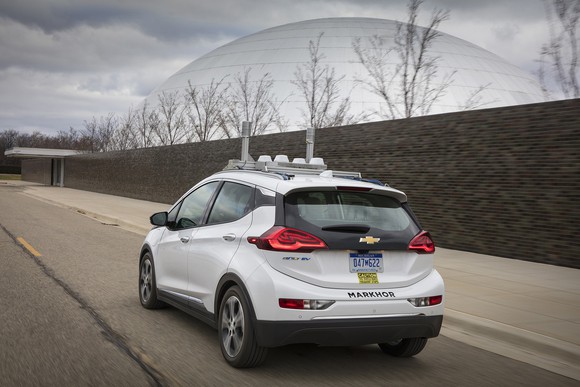 Alphabet’s Waymo is widely considered the leader in self-driving technology. The search giant’s pet project has logged more miles than any other competitor with more than 5 million on public roads, more than double that of Uber, by comparison.Waymo already has fully autonomous vans shuttling passengers in the Phoenix area, and the company is adding 62,000 Chrysler Pacifica Hybrid minivans to its fleet, an investment in the range of $2 billion.

However, Waymo’s financial impact still appears to be negligible inside the greater Google machine. Alphabet includes it in its “other bets,” along with projects like Google Fiber and Google X, and other bets lost $3.4 billion last year in total. By comparison, Alphabet’s total operating income was $26.1 billion last year.

However, considering the underlying strength of Google, Alphabet stock looks cheap at a P/E ratio of 30, nearly the same as the S&P 500, especially when considering the potential of Waymo. Some analysts estimate Waymo’s valuation at $70 billion; however, its worth is only likely to grow as its technology expands its reach.Waymo itself likely won’t move the stock until Alphabet reveals some of the underlying numbers, but when it does it could have a similar effect that Amazon Web Services had onAmazon. Another option to create value for shareholders would be to spin off the self-driving unit.

GM and Ford are two of the cheapest stocks on the S&P 500, trading at P/E ratios of 6.9 and 6.1, respectively. There may be good reasons for that. The auto cycle is past its peak, for example, and GM and Ford both expect flat revenue and profit growth in the near term. However, those valuations are ignoring the potential for both companies in the autonomous-vehicle (AV) market, especially General Motors.

GM shares spiked last weekwhen its Cruise AV division got a $2.25 billion investment fromSoftbank, one of the world’s biggest start-up investors, which valued Cruise at $11.5 billion. That’s not an insignificant sum, but considering that GM is preparing to deploy its own autonomous ride-hailing service in multiple cities by next year, the potential for Cruise and GM could be much greater. GM acquired Cruise in 2016 for over $1 billion, meaning its value has appreciated tenfold in little more than two years. The news that GM would acquire Cruise barely moved the stock, as shares finished up just 1% that day. Now, Cruise could be the centerpiece of GM’s biggest growth driver.

Ford, meanwhile, is more behind the curve than Waymo and GM with AVs currently, but the automaker plans to launch a fully autonomous vehicle by 2021.Ford says it will mass-produce a Level 4 autonomous vehicle, meaning one that can operate itself in most everyday situations, claiming it “will have achieved the highest level of automation by any automotive maker todate.”

Like GM, Ford is making acquisitions to beef up its AV capabilities, investing $1 billion into Argo AI, the company that is now designing the software for Ford’s AVs. While the company’s statement above about mass-producing a Level 4 vehicle by 2021 is bold, the market is treating Ford stock like it has no chance of accomplishing such a goal.

The risk of investing in emerging industries

It’s unclear at this point who will be the winner in the autonomous vehicle race. Though there are likely to be many, it’s worth remembering thatBlackberrywas the early winner in smartphones before being left in the dust by Apple. Warren Buffett has noted that there were as many as 2,000 U.S. automakers in the early days of automobiles, but only the big three survived, explaining why he avoids emerging markets.

His point is that it is sometimes very difficult to pick winners in emerging industries, but autonomous vehicles may be different as the landscape is dominated by established tech and auto companies, not start-ups. There are no pure-play stocks to choose from in the space, so the best move for investors angling for a piece of the driverless revolution is to buy a basket of these stocks. Along with the three above, you could consider addingTesla,Intel,Delphi Automotive,Aptiv and others. Many of these companies are already partnering with one another, so it seems likely that the growth in the industry will be spread across several stocks.

However, Wall Street is being characteristically short-term focused, ignoring the potential of the sector. That’s a huge opportunity for individual investors. Just look at what’s already happened to GM’s Cruise.