As a long-term shareholder in ConocoPhillips (NYSE:COP), I wanted to compare them will a leading domestic shale producer – EOG Resources (NYSE:EOG). As you surely are aware, COP had been one of the “Big 3” international integrated oil companies prior to the spin-off of Phillips 66 (NYSE:PSX), a move that unleashed tremendous shareholder value. But now COP is an upstream only company and the comparison to EOG is relevant and – at least to me – informative and interesting.

The following chart compares some relevant valuation metrics of the two companies:

A few observations are readily apparent: COP has a significantly higher debt load both in absolute terms, relative to total capitalization, and on a per share basis. However, COP’s debt load is somewhat an artifact of the past as it spent heavily on long-term large-scale projects like the oil sands in Canada and Australian LNG. The vast majority of capital outlays for those projects is in the past. In return, COP has two significant production assets that have “0” decline rates for a couple decades.

COP has almost 3x the level of production as does EOG. Surprisingly to me, when one adds bitumen to COP’s crude oil production, the amount of dry gas and NGLs at the two companies is relatively equivalent. This was surprising given COP’s significant gas production in the U.S. as well as its LNG and Euro-gas operations.

On an income basis, COP’s dividend yield is about 3x larger.

On a proved reserves basis, COP has almost 4x that of EOG. To be fair, EOG has recently raised its Delaware basin potential reserves estimates, but the numbers in the chart show proved reserves as of year-end 2015.

On a proved reserves per share basis, COP wins by almost 2x.

EOG’s stock price has faired much better than COP throughout the oil and gas commodity price crash. Over the past four years, EOG is up 75% while COP is down about 10% (see stock chart at the end of this article). To be fair it should be noted for the majority of that time COP paid a meaningful dividend (close to 4%) while EOG’s dividend was negligible. But that doesn’t change much due to EOG extreme outperformance.

However, given the current status of the companies, COP looks to be the better value. While there is no doubt the production growth profile of EOG is much more aggressive than that of COP – which is planning to maintain relatively flat production in the given price environment – the real question is how profitable can EOG’s production growth be? It is very difficult to predict the actual earnings potential (as in positive net income, in case some in the oil patch have forgotten what that is …) of the two companies because quarterly EPS reports over the past two years have been full of special charges and asset impairments. Suffice it to say at this juncture EOG wants to aggressively grow production while COP wants to pay down debt and increase shareholder returns. 2017 will be very interesting indeed.

On a big picture basis, COP is much better exposed to higher Brent and Euro-gas pricing due to its much more diversified global portfolio. COP has very profitable legacy production in Alaska – barrels that fetch the Brent price. EOG does not have a similar asset. In addition, COP has two long-term assets that will be cash flow cows with minimal maintenance expense going forward: the Canadian oil sands and Australia LNG. Again, EOG has no such assets.

On the other hand, EOG is a shale oil powerhouse. Of the company’s 555,200 boe/d of production, ~88% is generated in U.S. operations – the vast majority of which comes from short-cycle shale wells from leading acreage positions in the Eagle Ford, Permian and Bakken. COP too has a leading position in the Eagle Ford and the highest average producing wells, but decided not to prioritize that play during the downturn. However, 2017 should see COP re-accelerate and flex its muscle in the Eagle Ford.

As a COP shareholder I am trying to be objective here. But given the progress COP has made over the last two years in completing its large-scale cap-ex programs (during a severe price downturn no less), and given its much more diversified global portfolio and asset base, COP appears to be the better value now. While debt is ~2x higher on a per share as compared to EOG, so are proved reserves per share. And while production is ~3x higher for COP, its total EV is only ~30% higher (likely influenced by the debt level). But COP’s management has said it will sell non-core assets to pay down debt – something they have done quite successfully in the past. But much of COP’s performance in 2017 will likely rely on the company’s ability to monetize non-core assets and pay down debt.

However, if investors believe that EOG can display profitability while aggressively growing shale production, perhaps that would be your choice. For investors still on the fence after reading this article, making a 50/50 investment in both companies would be a happy compromise. 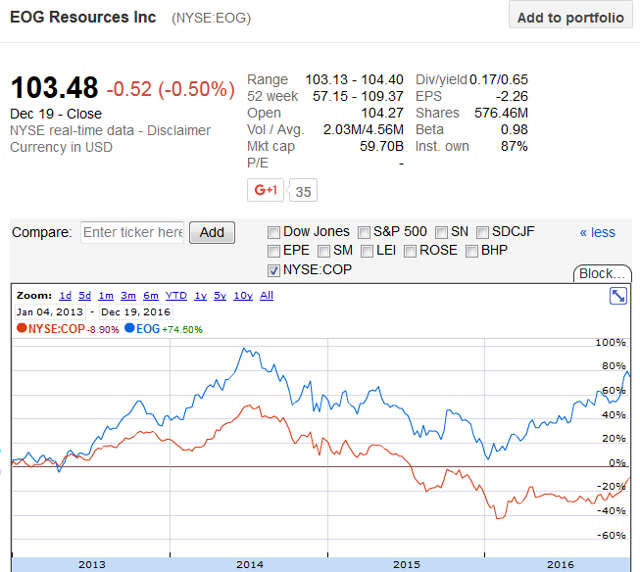 Additional disclosure: I am an engineer, not a CFA. The information and data presented in this article were obtained from company documents and/or sources believed to be reliable, but have not been independently verified. Therefore, the author cannot guarantee their accuracy. Please do your own research and contact a qualified investment advisor. I am not responsible for investment decisions you make. Thanks for reading and good luck!