“We went through the dotcom bubble bursting, the credit crisis and other extreme periods of time, and ETFs have continued to grow,” Dan Draper told CNBC’s Bob Pisani.

Critics of ETFs say they can lead to increased volatility. Jack Bogle, the late founder of The Vanguard Group, said most of the trading in ETFs was done by “financial institutions that use them to hedge or equitize cash reserves.”

Draper maintains, however, investors are now “looking at things like quality and low volatility,” particularly when investing in the Invesco QQQ Trust.

Draper made his comments on the day the QQQ ETF, a widely followed exchange-traded fund, turned 20 years old. The ETF, which is commonly referred to as “the Qs,” was launched in 1999 during the height of the dotcom bubble.

In that time, the Qs are up more than 200 percent, outperforming the SPDR S&P 500 ETF Trust — which tracks the broad index — by more than 100 percentage points.

QQQ vs SPY in past 20 years 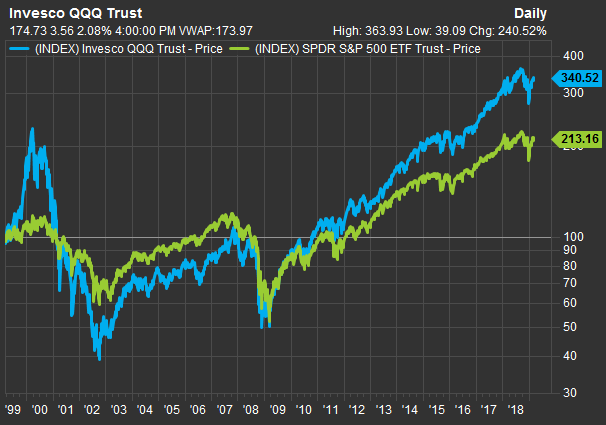 The Qs were quickly adopted as a proxy for big tech given its exposure to large-cap stocks in the space. The fund’s largest holdings by weight are Microsoft, Alphabet, Apple, Amazon and Facebook. Those five stocks alone make up more than 40 percent of the Qs in terms of weight.

But Draper said it can be used for more than tracking tech. “It is a proxy for growth in the U.S. in particular. It’s not just technology, but consumer areas as well as biotechs,” he said.