Facebook is facing another investigation over revelations that information from tens of millions of its users were accessed by data research firm Cambridge Analytica.

The Philippines is the latest country to launch an official inquiry, with regulators saying on Friday that CEO Mark Zuckerberg had not sufficiently explained what went wrong.

“We acknowledge the communications of your global and regional representatives made directly to our office,” the Philippines National Privacy Commission said in a letter addressed to Zuckerberg dated April 11.

“Unfortunately, your response has been generic and inadequate to satisfy the mounting concerns of Filipino users,” the regulator wrote in the letter, which was published by the government on Friday.

Facebook (FB) said last week that nearly 1.2 million of its users in the Philippines may have had their data exposed to Cambridge Analytica, more than any other country outside the United States.

“We are strongly committed to protecting people’s information,” Facebook said in a statement. “We are engaged with the Philippine National Privacy Commission on this.”

Facebook has said 87 million users around the world were impacted by the data scandal, far higher than initial estimates. Cambridge Analytica has disputed that figure.

The country’s privacy commission has given Facebook 15 days from receiving the letter to provide more documentation on how it collects data from Filipino users. It has also asked for details on how Facebook users in the country were affected by the Cambridge Analytica scandal.

Indonesia’s minister for communications told CNNMoney last week that he would “deeply consider” shutting down Facebook if its actions over the scandal were unsatisfactory. The country also had more than 1 million Facebook users whose data may have been accessed by Cambridge Analytica.

Other countries with a significant number of affected users include the United Kingdom, Mexico, Canada, India, Brazil and Vietnam. 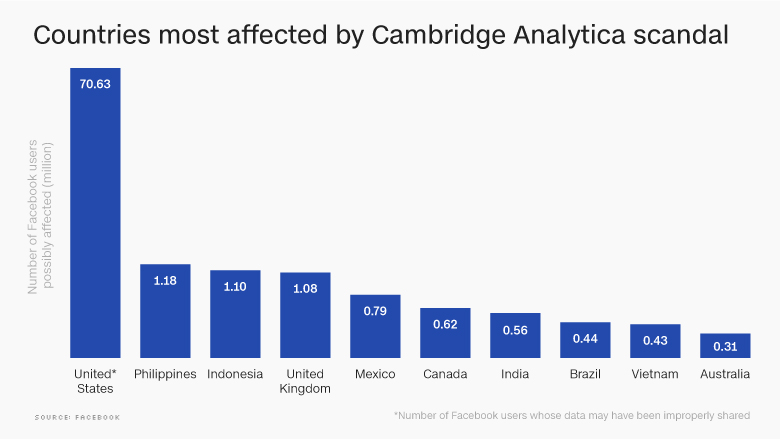 Zuckerberg admitted during hours of questioning by two separate US Congressional panels that his company made “a big mistake by not taking a broad enough view” of its responsibility.

But when asked whether Facebook would commit to minimizing user data collection as much as possible, he said: “This is a complex issue that deserves more than a one word answer.”

The CEO also revealed during his testimony that his own user data had been shared with Cambridge Analytica.