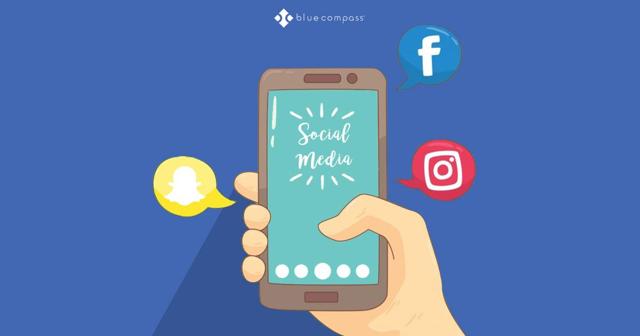 Facebook’s (NASDAQ: FB) Stories is the story here. Facebook sets to chase Live Stories and messaging monetization. With less reliance on News Feed ads, growth is expected to slow down but engagement is rising. More than 2 million advertisers are using Stories. The 2H higher volume may offset the low ad pricing which is expected to pressure the sales growth in 1H 2019. The monetization of Stories becomes likely as early as 2H 2019 if Facebook is allowed to integrate Messaging and Instagram by regulators. Apparently, investors seem to shed off recent FTC’s proposed multi-billion fines on Facebook privacy violation, as analysts like to use Google digesting a $5-billion fine from the EU in just a quarter as not a critical story to Facebook. Although only time can tell if Facebook got out of the woods yet, the market’s insensitivity to regulatory uncertainty suggests that the market will be able to price Facebook shares based on the company’s long-term fundamentals. It is, therefore, the purpose of this post to estimate those long-term target prices.

In the post-FAANG world that Facebook is in, long term is anything over one quarter. Since any publicity can hit the company any day, simple speculation on ad income over a quarter or two becomes impractical. For professional Wall Street analysts who are more technologically trained and often have private information through personal contacts, they often couldn’t even predict the current quarter earnings announcement. It is therefore irresponsible to estimate the future stock prices beyond the points which are backed up by financial forecasts. Using this criterion, I only estimated Facebook’s “long-term” future stock prices all the way till 4Q 2021, since this is the furthest future time point that consensus financial estimates were provided.

In this sense of “long turn,” stock prices are mainly affected by management guidance and analysts’ estimates of future financials. Analysts’ estimates are closely tracking management guidance, if available, as it contains the most forward-looking information. As a result, Facebook’s stock prices are known to react to analysts’ forecasts of future revenue, EPS, gross margin, free cash flow, and capital expenditure, where forward estimates are denoted by the dotted lines (Figure 1A – Figure 1E). It is worth noting that share prices have been mainly positively associated with all five positively trending financials since 2012. Four out of five future financials (dotted line) are expected to improve due to the anticipated resolution of regulatory uncertainty and company’s better mix between pricing and volume. Gross margin is scheduled to trend down as warned by the higher expenses related to the combat against privacy issues and fake accounts.

However, after Facebook’s earnings expectation has dropped more than 40% in the last 6 months, shareholders have started paying more attention to future revenue estimates than to gross margin estimate (Figure 1A vs. Figure 1C). Another good sign is that, different from many other firms in this turbulent time, Facebook’s free cash flow is expected to increase (Figure 1D), as the company is not expecting to lower its capex after 2019 (Figure 1E). 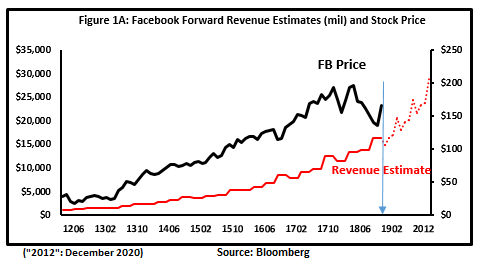 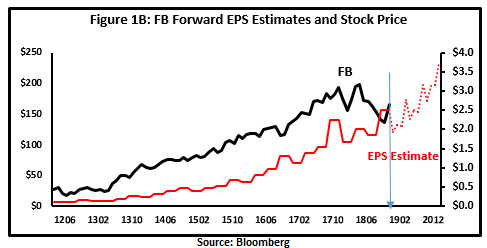 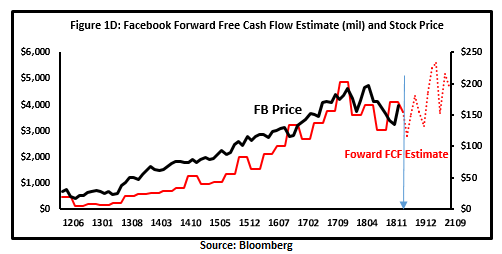 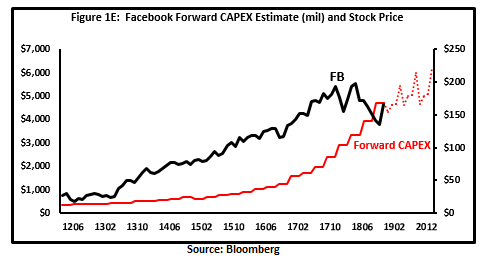 The story messaging from the positive relationship between forward financial estimates and stock prices should give investors more comfort, since it suggests that Facebook’s stock prices have reflected underlying fundamentals after all, even though there may have been occasional “breaks” over time. Furthermore, since Wall Street analysts, as a group, tend to give forward estimates routinely many quarters into the future (till 4Q 2021), it may be informative to investors if future Facebook prices can be estimated with the corresponding forward financial forecasts. That being said, the premise of this exercise is that the analysts’ consensus estimates need to be unbiased as a group and over time. Therefore, based on the Street’s estimates of the five financial metrics for last 28 quarters and next 10 quarters as shown in Figures 1A-1E, I was able to estimate Facebook’s “forward target prices.” The way I came up with this forecast price is as follows:

1. I first collected all management guidance, stock price, and consensus estimate data on revenue, EPS, free cash flow, and capex for the past 40 quarters and next 10 quarters.

2. I then correlated Facebook’s stock prices with the 28 historical estimates for the five financial metrics (multiple correlation). Keep in mind that although I used historical data to estimate a historical relationship, it is still a forward-looking stock pricing model. This is because at any point of time in history, Facebook’s price is estimated by the forward estimates of the five financial metrics at that time. The only assumption I made is that investors used the same (forward-looking) valuation structure to price stocks consistently.

3. The relationship I identified in (2) would suggest how today’s stock price moves in response to analysts’ forecasts of the five forward fundamentals. I also included a tech ETF index (QQQ) to capture the market impact on Facebook’s stock price.

4. Using the relationship and the analysts’ next 10-quarter estimates of the five metrics, I was able to compute the future stock prices corresponding to those forward financials.

In Figure 2A, I showed how this analysts’ forecast of stock prices should have looked like (in red), compared with the actual stock prices (in black) of Facebook over the long run. Since 2012, Facebook’s actual stock price has moved very closely with the fundamental forecast price. This would give me confidence about the validity of the assumption that investors did look at forward fundamental metrics in pricing Facebook shares. In a further close-up, I showed the future quarterly target prices in Figure 2B from 4Q 2018 through 4Q 2021. The predicted Facebook price moves from $154, $205, and $267 by 2021 (the red dotted line). It should be cautioned that although Facebook is predicted to show a drastic price appreciation given the current forecasts of future financials, it does not take into account potential future stock market crashes. Given the extraordinary regulatory risk that Facebook faces, any resulting analysts’ revisions on forward financials can easily shift the predicted target price path in Figure 2B upward or downward. 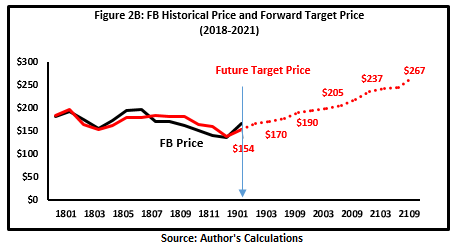 It may not happen until later 2019, but Facebook’s stock price is set to break $200 again. Street analysts have been very optimistic about Facebook’s long-term fundamentals, assuming that the FTC’s multi-billion fine will be a non-issue; Stories’ volume growth will overcome price weakness, and the regulators will allow Instagram and messaging to be integrated and monetized. Most financial metrics are expected to be significantly improved. Assuming that the general stock market and the U.S. economy will not throw a curveball, Facebook’s stock price will hit $200 one year out and looking to gain an annual return of 20% over next three years. Both the time path and the level of the future price movement totally depend on the actual time path and the realization of the forward financial estimates. For Facebook shareholders, in order to receive an annual 20% future stock return, Facebook needs to make sure regulators not get in the way of messaging platform integration.

Disclosure: I/we have no positions in any stocks mentioned, and no plans to initiate any positions within the next 72 hours. I wrote this article myself, and it expresses my own opinions. I am not receiving compensation for it (other than from Seeking Alpha). I have no business relationship with any company whose stock is mentioned in this article.