Federal Reserve officials added the word “further” twice to their January statement. On Wednesday, investors may find out why.

At Chair Janet Yellen’s last meeting Jan. 30-31, the central bank pledged twice to make “further gradual adjustments” in interest rates as opposed to just “gradual adjustments” at the prior gathering. While the language was consistent with adding more emphasis to the plan for rate hikes, the minutes of the closed-door meeting, due Wednesday, will probably give details on what message officials wanted to send with the wording tweak.

One possibility is that it was an indication the Federal Open Market Committee was debating raising interest rates by more than the three moves officials had penciled in for 2018. Another idea is that policy makers may have discussed increasing their estimate of the neutral interest rate — a theoretical level that neither speeds up nor slows down the economy — in light of new U.S. fiscal stimulus.

“The meaning of the word ‘further’ was far from clear,” said Roberto Perli, partner at Cornerstone Macro LLC in Washington. “Maybe it was meant to convey a continued string of hikes over time? Who knows? I hope the minutes clarify what they meant.”

The meeting, where Yellen bowed out before Chairman Jerome Powell took over a few days later, provided little drama. The committee held rates steady, prompting no dissents, and upgraded its assessment of the economy and confidence that inflation was moving to its 2 percent target, reflecting recent upbeat economic reports. Yellen didn’t hold a press briefing after the gathering.

Picking Up the Pace 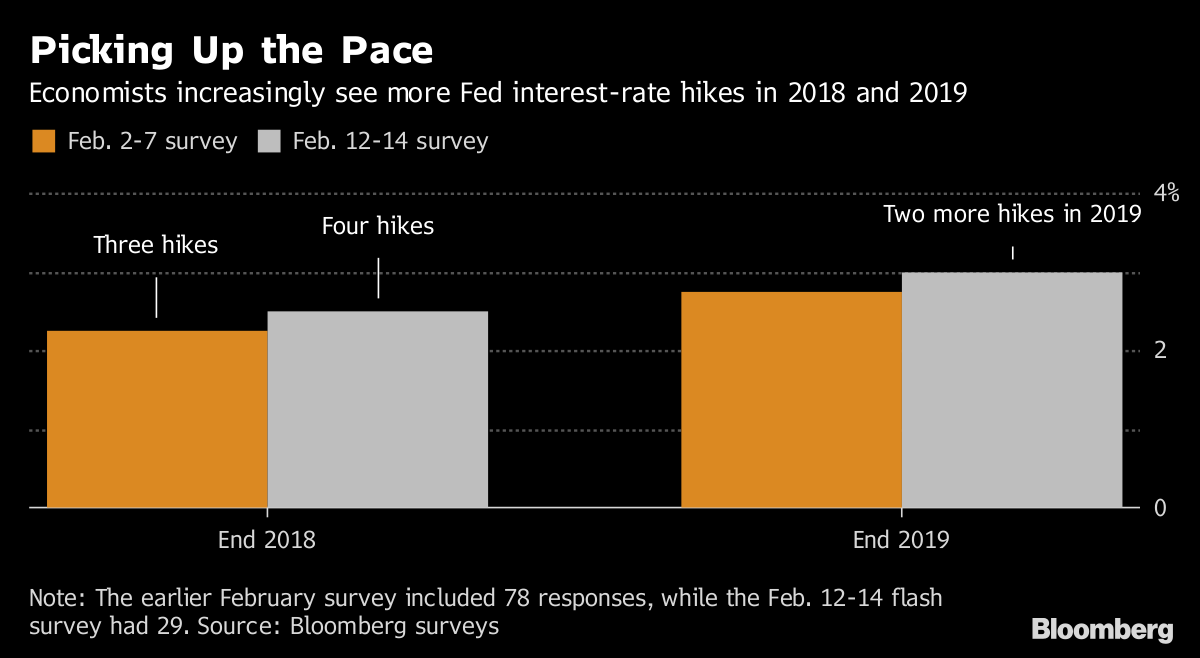 New York Fed President William Dudley said in a Feb. 8 interview with Bloomberg Television that from his perspective, the inclusion of the word “further” in the statement means “maybe a little bit more confidence in the strength of the economy, on the back of more momentum through the end of the year, and a large tax-cut package.”

A growing number of private economists now estimate four rate hikes this year, according to a Bloomberg survey last week, compared to the three moves penciled in by policy makers in quarterly forecasts they updated in December. Investors are nearly certain the FOMC will raise rates at its meeting in March, when Powell is scheduled to have his first press conference since becoming chairman.

“The Fed is now seen to be more hawkish on inflation expectations especially after the higher-than-expected January wage growth and CPI inflation recently, and markets will hope to glean some insights from the minutes,” economists at United Overseas Bank Ltd. in Singapore wrote in a research note Wednesday.

President Donald Trump signed a $1.5 trillion tax overhaul into law in December and the Congress has since passed a $300 billion government spending package that is seen lifting U.S. economic growth and inflation.

One interpretation of the language change is to broach the idea that rising federal spending and the hefty tax cuts could require additional Fed rate hikes down the line, said Jonathan Wright, an economics professor at Johns Hopkins University in Baltimore and a former Fed economist.

“The minutes will make reference to fiscal stimulus and its implications for neutral interest rates,” he predicted. With the stimulus, “more rate hikes will be needed to remove policy accommodation.”

Investors will also scour the minutes for hints on how Fed officials were talking about asset prices back in late January, days before the stock market suffered its most severe bout of volatility in years. Powell highlighted financial stability as an important goal at his ceremonial swearing-in on Feb. 13 in Washington.

“It will be interesting whether they discussed asset prices at all, whether they saw them as high,” said Diane Swonk, chief economist at Grant Thornton LLP in Chicago. “Yellen has described them as elevated, and the minutes could describe them as high.”

If they viewed assets as a potential “bubbling pot,” they might be relieved rather than worried by the stock market’s correction and that financial conditions were finally tightening in response to higher interest rates, she said.

The S&P 500 index slumped following the release of wage data suggesting a threat of higher inflation, while the 10-year U.S. Treasury note yield has risen toward 3 percent. In response, Fed officials have downplayed any concern over volatility. Stocks have since partially recovered their losses.

Dudley, in the same interview, called the drop “small potatoes,” while St. Louis Fed President James Bullard said Feb. 6 it was the “most predicted selloff of all time.”

Inflation has been below the Fed’s target for most of the past six years, and forecasts for price gains have been a central point of discussion in recent meetings.

“The discussion on inflation should be interesting, since we have had very firm wage and price readings this month,” said Stephen Stanley, chief economist at Amherst Pierpont Securities in New York.

— With assistance by Michelle Jamrisko