Germany’s economy grew at the weakest pace in more than a year at the start of 2018, held back by trade, amplifying a slowdown that’s been seen across the euro area this year.

The 0.3 percent expansion was softer than economists had forecast and just half the pace recorded in the final three months of 2017. The Dutch economy also cooled more than expected. With the 19-nation currency region seeing a broadly similar deceleration, the question for the European Central Bank is whether this is merely a soft patch or indicative of something more alarming.

Economic growth slowed more than forecast in the first quarter 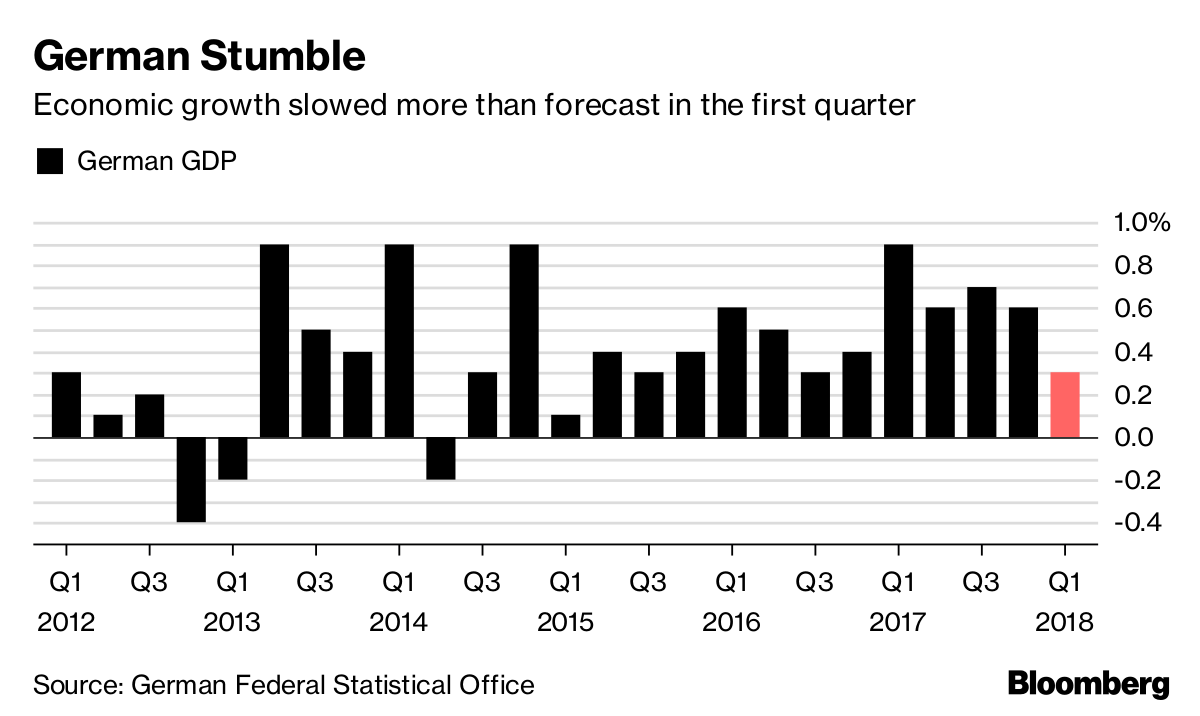 So far, officials have largely dismissed the sluggish start to the year — blaming factors such as colder weather — and expressed confidence that weakness will dissipate in the course of the year. Speaking on Monday, ECB Governing Council member Francois Villeroy de Galhau argued that growth remains solid and broad-based and that policy makers were still likely to halt asset purchases this year.

The European Commission has also downplayed concerns and this month maintained its forecast that full-year growth will almost match the decade-high pace hit in 2017. Still, there are threats, including rising trade protectionism and a stronger euro that could act as dampers on the expansion in Germany and the euro zone.

“The German economy remains fundamentally strong despite the sudden loss of momentum,” said Oliver Rakau, chief German economist at Oxford Economics. “However, it appears that with last year’s global trade surge fading and the specter of protectionism hanging over firms, the German economy has passed its growth peak for now.”

The euro was little changed on Tuesday and traded at $1.1928 as of 9:25 a.m. Frankfurt time. While it’s declined in recent weeks, it’s still up about 9 percent in the past year.

Germany’s statistics office said first-quarter growth was bolstered by a pickup in equipment investment and construction and a slight increase in private consumption. Government spending declined for the first time in almost five years, with exports and imports also down.

While shrugging off the recent weakness, the ECB has acknowledged threats to growth, saying last month that global risks have become “more prominent.”

In news that might please European central bankers in their long battle to revive inflation, French wage growth accelerated in the first quarter to 0.7 percent. While the quarter is often stronger than the rest of the year, that’s still the biggest increase since 2013.

Eurostat will publish a second estimate for euro zone GDP at 11 a.m. Frankfurt time. The ZEW institute will release its latest investor expectations index at the same time.

— With assistance by Kristian Siedenburg, Harumi Ichikura, and Zoe Schneeweiss