Contrarian investors possess a straightforward strategy for turning a short-term profit from the Feds interest-rate-setting meeting this week: Wait a few minutes after the Fed announces its decision on June 13, and bet that the stock market will soon reverse however it initially reacted.

The reason contrarians are drawn to this strategy: The Feds decision itself wont have much impact on U.S. corporate prospects. So we know in advance that Wall Streets knee-jerk reaction regardless of whether it is up or down wont be based in reality.

You might find it hard to believe that a decision on rates would have so little consequence. But bear in mind that rates will remain extremely low even if the Fed decides to raise rates this week and signals an aggressive schedule for more hikes at upcoming meetings. Any hike, or series of hikes, is unlikely to have appreciable effect on firms capital spending decisions over the near-term or even the intermediate term.

Im basing this not just on first principles but also on hard data from the Duke CFO Global Business Outlook survey. This survey, which has been conducted quarterly since 1996, polls CFOs on optimism about their companies prospects and capital investment plans, as well as expected GDP growth.

Wednesday of this week is the release date for the next CFO Survey, so this column was written without the benefit of the latest information. But, in an interview, John Graham, the director of the CFO Survey, told me that hed be surprised if this weeks survey shows that CFOs optimism in general, or capital expenditure decisions in particular, are significantly dependent on interest rates remaining as low as they have been in recent years.

In fact, he said, recent interactions hes had with CFOs consistently have shown that their outlook is not particularly sensitive to what the Fed does over the near term. Optimism will remain high and capital expenditures robust even if interest rates over the next year rose by even several percentage points.

News headlines almost invariably lead you in the wrong direction.

Take what happened in the wake of last Decembers rate-setting meeting, which is the last time I wrote about this contrarian strategy. As you can see from the chart below, the market initially rallied in the wake of that decision, and then almost as quickly reversed itself. 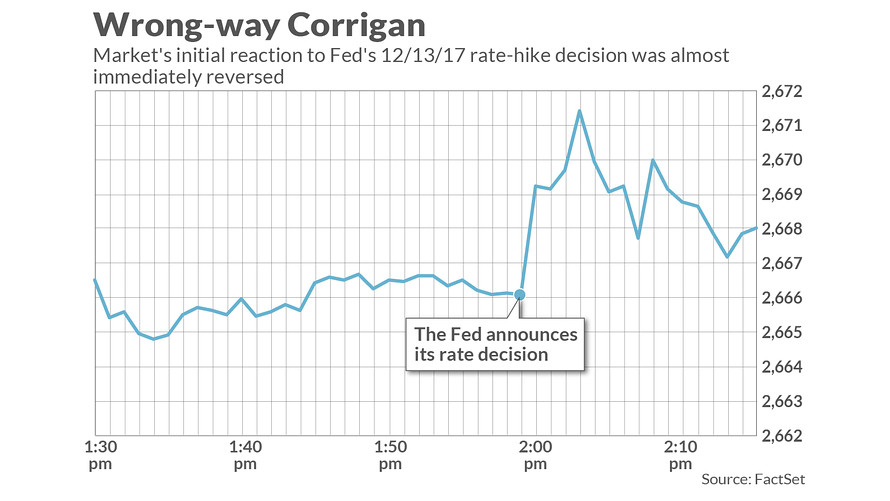 To be sure, few of us are so short-term focused that we would even want to try this contrarian strategy on Wednesday afternoon. But its still important to appreciate the rationale for this strategy, since it makes a broader point about how news headlines almost invariably lead you in the wrong direction.

This point was made recently by a fascinating post at the Abnormal Returns blog, which is edited by Tadas Viskanta. In this particular post, Viskanta gathered a number of provocative comments about how little attention top traders pay to financial headlines.

One was from Stefan Cheplick, a social media editor at StockTwits.com: I know no great investor who has ever attributed their success to news or headlines. If you know anyone who thinks like this, I will be straight up in awe The money in headlines is shaking people out. Its tricking them into dreams of grandeur, then shattering them. Headlines are glass castles.

One response to this, of course, is not to read any of the headlines, but that is unrealistic for almost all of us. But, as Viskanta points out, we can choose to engage the financial news on our own terms. Those terms should include a knowledge of how the game is played and how not to get played in the process.

For more information, including descriptions of the Hulbert Sentiment Indices, go to The Hulbert Financial Digest or email mark@hulbertratings.com .