Investors and policymakers have gone looking for inflation over the past decade and largely have come up empty.

It could, however, come barreling at them soon like an 18-wheeler.

Multiple signs of inflation in freight-related industries are at or near historical highs, in what could be an early sign that price pressures are building and ready to reverberate around the economy.

Freight marketplace DAT keeps track of supply and demand in the freight industry through a bulletin board that matches companies with loads to be delivered to the vehicles that will take the goods to the marketplace. The measures are in the spot market, where vendors that don’t contract their deliveries find drivers for their products.

Recent readings show demand for vehicles skyrocketing, a sign that generally points to inflationary pressures building up in the supply chain.

“It’s an indication that there’s capacity pressure in the marketplace, that brokers are searching more and posting more in order to find a truck,” said Peggy Dorf, market analyst at DAT. “This is an indicator that pressure is much higher than it was a year ago.”

Metrics the firm uses to track demand for trucks are showing a sharp increase and outstripping the number of drivers available. Supply-demand dynamics, then, would indicate rising rates for trucks that could lead to pricing pressures on a broader level.

Loads on the spot market in general are up 100 percent from the same period a year ago. Another measure, flatbed load-to-truck, which tracks the amount of vendors looking for flatbeds and is generally the highest of all truck types, is up 142 percent.

Every other broad market trend line that DAT posts was up double digits on a year-over-year basis including the all-important fuel costs, which are up 20 percent.

“Trucking in general is a leading indicator,” Dorf said. “If the economy is also growing, it’s one of those rising tides [that] lifts all boats. The pressure on the spot market doesn’t seem to have let up.”

The numbers by themselves, though, don’t indicate that inflation is ready to strike soon. Indeed, the most recent readings, such as the consumer and producer price indexes, show inflation pressures rising though relatively benign.

But they do jibe with some other indicators showing inflation is rising beneath the surface. 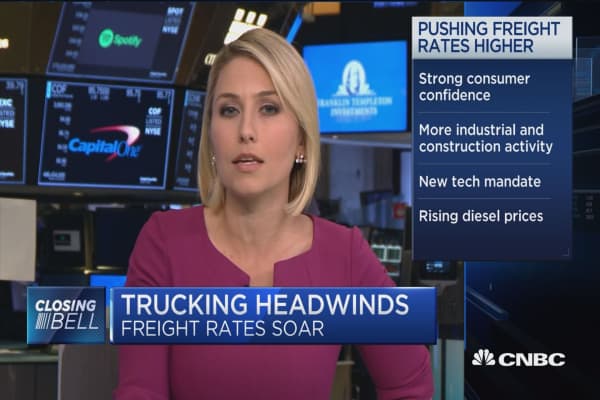 Now, the rapid increase in trucking demand is beginning to gather attention, with some corners of the financial markets wondering how long it will take until broader inflation gauges are impacted.

“When you have price pressure that is above and beyond what’s normal, someone has to eat it,” said Peter Boockvar, chief investment officer at Bleakley Advisory Group. “The truckers are obviously going to charge more for their services because they can, the buyers of that stuff who need the trucks are not going to eat the cost. They’re going to do their best to pass it down.”

While the most recent reading of the producer price index showed just a 2.6 percent gain over the past 12 months, the freight subindexes told a different story: truck transportation jumped 6 percent, rail was up 5.1 percent and air rose 3.9 percent. Overall, the general freight trucking component is just below the all-time high it hit in February. 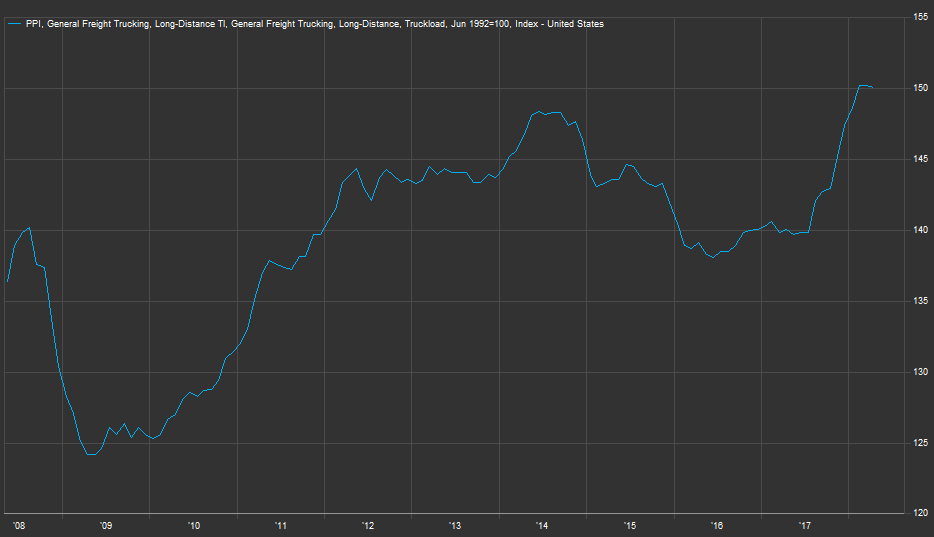 “Demand is still exceeding capacity in most modes by a significant amount. In turn, pricing power has erupted in those modes to levels that spark overall inflationary concerns in the broader economy,” Donald Broughton wrote in the most recent Case Freight Index Report, a widely read industry publication.

“April’s 12.8% increase [in the Case Freight Expenditures Index] clearly signals that capacity is tight, demand is strong, and shippers are willing to pay up for services to get goods picked up and delivered in modes throughout the transportation industry,” he wrote. “We should also remind readers of a fundamental rule of marketplaces: volume leads pricing. Repeatedly we have watched in a host of different markets, that volume goes up before pricing starts to improve and volume goes down before pricing starts to weaken.”

And the pricing indicators are quietly pointing higher.

Spot market rates for flatbeds were at $2.71 a mile for the week ending May 12, just a penny off the record they had set the week before, according to DAT. A number of trucking companies reported big rate jumps in the first quarter. Daseke said its rates were up 10 percent for flatbeds, while Universal Logistics Holdings said revenue per mile excluding fuel surcharges rose 12.7 percent annually, according to a Journal of Commerce report.

The surge in demand has led to driver shortages and sharp pay increases, which ultimately likely will be passed onto consumers.

“We’re paying a lot more than we ever had,” Robert Ragan, chief financial officer with Melton Truck Lines, recently told CNBC. “We’re in a unique operating environment right now in the transportation industry, where demand is at an all-time high and supply of qualified drivers continues to dwindle. We have a hard time filling our trucks, and pay is skyrocketing.”

It all adds up to an environment that could prove tricky ahead.

The Federal Reserve is continuing to raise interest rates, with at least two more quarter-point hikes expected this year. Central bank officials watch a number of indicators, and if more start flashing inflation signals, that could mean a faster pace of rate hikes ahead.

“It’s inevitable that prices will go up,” Boockvar said. The Fed is “on autopilot now, unless things accelerate on inflation.”