Rogers Co. (NYSE:ROG) Director Ganesh Moorthy sold 1,500 shares of the business’s stock in a transaction that occurred on Friday, February 22nd. The shares were sold at an average price of $155.00, for a total value of $232,500.00. Following the sale, the director now owns 7,500 shares of the company’s stock, valued at approximately $1,162,500. The transaction was disclosed in a legal filing with the Securities & Exchange Commission, which can be accessed through this link.

Rogers (NYSE:ROG) last announced its quarterly earnings results on Wednesday, February 20th. The electronics maker reported $1.67 earnings per share (EPS) for the quarter, topping the Thomson Reuters’ consensus estimate of $1.27 by $0.40. Rogers had a return on equity of 13.15% and a net margin of 9.97%. The business had revenue of $222.94 million during the quarter, compared to the consensus estimate of $220.38 million. During the same quarter in the prior year, the company posted $1.36 earnings per share. Rogers’s revenue was up 6.7% compared to the same quarter last year. On average, equities analysts anticipate that Rogers Co. will post 5.93 EPS for the current year.

ILLEGAL ACTIVITY NOTICE: This story was first published by Ticker Report and is owned by of Ticker Report. If you are reading this story on another website, it was stolen and reposted in violation of US and international copyright and trademark legislation. The legal version of this story can be read at www.tickerreport.com/banking-finance/4188942/insider-selling-rogers-co-rog-director-sells-232500-00-in-stock.html. 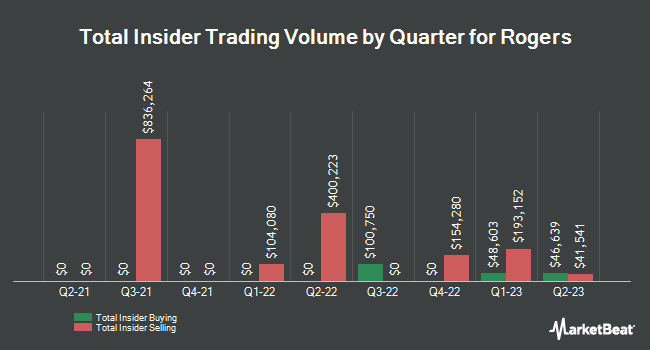