The threat of President Donald Trump exiting the Iran nuclear agreement might be a nightmare for international diplomacy, but investors in oil stocks have thoroughly enjoyed the volatile ride.

Since reports surfaced in mid-March that Trump may pull out of the deal and Iran hawk John Bolton’s appointment as national security adviser spurred a rally in oil, global energy shares have outperformed against a backdrop of lackluster equity markets. The MSCI ACWI Energy Index is up 10 percent since March 19, compared with a drop of 1.3 percent in the global benchmark. 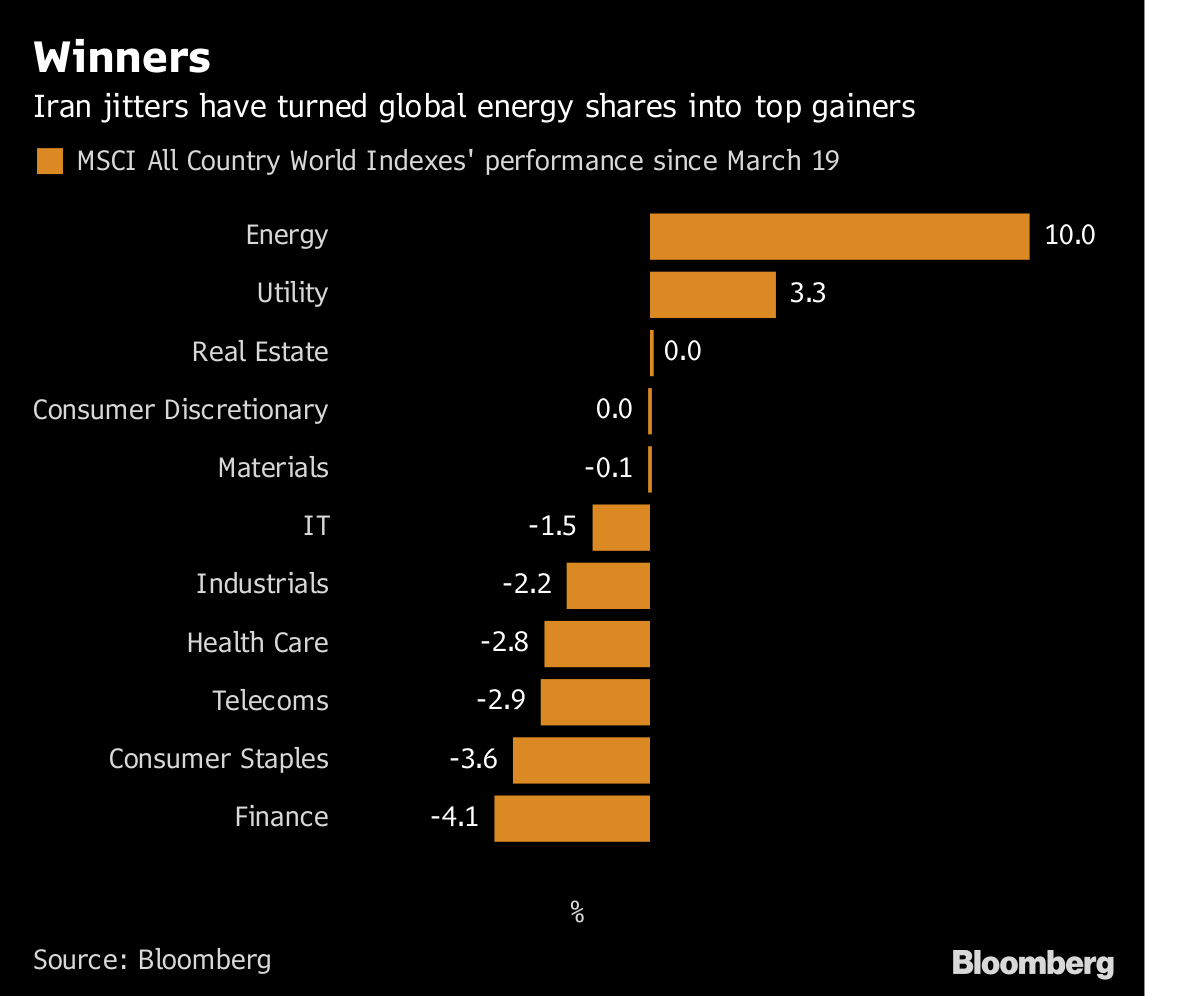 Trump said he’ll announce the long-awaited decision at 2 p.m. in Washington Tuesday after strongly hinting that he will withdraw. Foreign leaders and analysts say the president is likely to exit, casting into doubt the future of an accord widely seen as reining in Iran’s nuclear program. At the same time, oil retreated as some analysts speculated Trump may surprise allies by agreeing to stay in the accord a while longer.

His announcement — even if it’s a decision to pull out that boosts oil prices — could serve as an opportunity for stock investors to lock in their gains on the world-beating sector, according to Pictet Asset Management.

“While we are fully overweight the energy sector, I suspect that in the short term any outcome of the Iran deal would be rather seen as an opportunity to take profits,” said Luca Paolini, chief strategist at Pictet Asset Management, which oversees about $500 billion. “But we still like the sector over the next six to 12 months.”

Here are some stocks that may win or lose from Trump’s possible break-up of the Iran deal:

According to Grupo Santander SA and Oddo-Bhf, the energy company with the biggest exposure to Iran is Total SA. In February, Chief Executive Officer Patrick Pouyanne said that if the U.S. decides to withdraw from the nuclear treaty with Iran and reintroduce “secondary” sanctions, “it creates a real problem” for Total’s South Pars 11 project.

Total has a 50.1 percent stake in the 20-year South Pars venture, with China National Petroleum Corp. holding 30 percent and Iran’s Petropars, 19.9 percent. If Total withdraws, Iran will transfer the company’s stake to CNPC, the head of National Iranian Oil Co. has said.

“Total is most sensitive to the Iran deal being broken up, but with very little actual capital commitment and in my view unlikely to see much financial or value impact from this deal being scrapped,” said Jason Kenney, an analyst with Banco Santander. “At the same time, if the deal remains in place, Total is potentially best exposed to the medium and long-term upside by having a commitment to Iran and asset and resource exposure.”

Despite the toughest U.S. sanctions to date, imposed last month, the Russian equity index has been rallying, thanks to its high sensitivity to the oil price. About half of the MOEX Russia Index’s weighting is in crude-linked shares, such as oil giants Rosneft PJSC and Lukoil PJSC. Plus, oil is Russia’s top export earner, so a jump in prices boosts the nation’s budget.

Renault SA is among automakers that have returned to Iran after sanctions were partly lifted. It announced a new joint venture in August to build 150,000 vehicles a year in Iran, adding to its current capacity of 200,000 autos.

In January, Renault CEO Carlos Ghosn said Iran is a promising market despite political uncertainties regarding the U.S. policy and the automaker will benefit from these uncertainities and continue investments as other automakers stay away from Iran.

The risk to Renault’s Iran investments lies in the possibility of the European Union following the U.S. in resuming sanctions against the country.

Some of the largest deals at stake include the world’s biggest airplane manufacturers. Airbus Group SE signed off on a contract with Iran for 100 jetliners, worth about $19 billion at list prices, while Boeing Co. and Iran’s Aseman airline signed a $3 billion agreement for 30 737 Max jets. Boeing also struck a $16.6 billion deal with national carrier Iran Air for 80 aircraft.