Mario Draghi’s press conference on Thursday may well feature repeated versions of the same question: how worried is he?

From sagging business confidence to falling industrial output, the region seems to be losing economic momentum after the best performance in a decade last year. Yet the European Central Bank president and his colleagues say the expansion in the 19-nation bloc is stabilizing rather than slowing down.

Follow the ECB rates decision and briefing in our TOPLive blog here.

In his press conference at 2:30 p.m. in Frankfurt, Draghi will have the chance to restate his case for a prudent approach toward ending bond purchases while reaffirming the positive outlook for the region’s economy.

Economists don’t expect the Draghi to announce any changes to language or policy until June. That’s when new projections will show whether the bank is reaching its goal of lifting inflation sustainably to just under 2 percent. He may even wait until July, according to officials familiar with the matter.

The cautious mood in Europe was highlighted a few hours before the ECB decision when Sweden’s central bank delayed a plan to raise interest rates for the first time in seven years because of weak inflation. The Riksbank now doesn’t see tightening until “toward the end of the year” compared with an earlier plan for the second half of 2018.

Here are the key points Draghi is likely to address.

A string of disappointing reports in recent weeks has sowed fears that the euro-area boom — full swing at the turn of the year — may already be fading. ECB policy makers have acknowledged the “moderation” of economic indicators but remained sanguine, suggesting the data were simply showing growth stabilizing at a solid pace. This week’s Purchasing Managers’ Index supports this assessment.

Alarm bells are still ringing for some. Germany’s business climate fell for a fifth month and sentiment deteriorated in France and Italy, too. A flash estimate of first-quarter gross domestic product is due next Wednesday. Economists predict growth of 0.5 percent — lower than the 0.7 percent recorded at the end of 2017, but still pointing to above-potential expansion for the region.

Core inflation — price gains excluding volatile energy and food — disappointed expectations in March, staying at 1 percent for the third consecutive month. Yet there are signs that the gradual build up of price pressures that ECB policy makers have been expecting for years may finally be around the corner.

Supercore inflation — a measure by Bloomberg Economics that focuses on items that have the strongest connection to the spare capacity in the economy — has been slowly rising in recent months. In Germany, public-sector employees signed a pay deal that should eventually boost inflation. It follows a similar deal for factory workers. One thing to watch out for in the press conference is whether Draghi says such agreements are strong enough to comfort policy makers.

ECB policy makers have been keeping an eye on the euro. After a strong 2017, the single currency stayed on an upward path against the dollar in the first months of the year, and seemed set for more increases as officials paved the way for an exit from quantitative easing. Now, those gains are have petered out as the economy’s soft patch risks delaying Draghi’s plans. 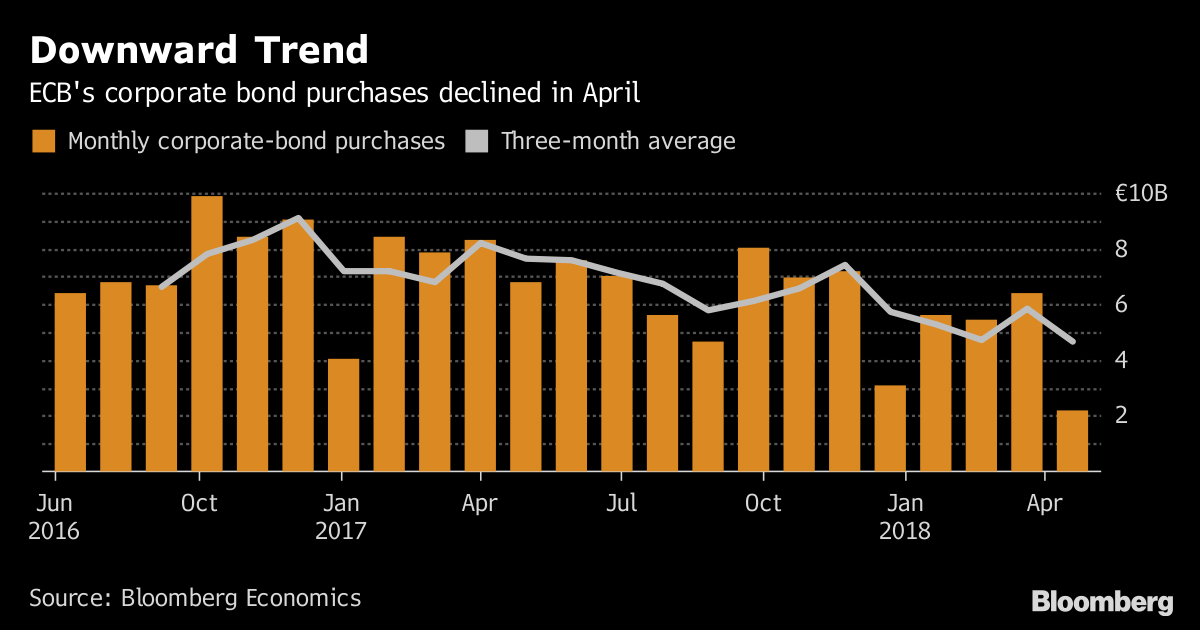 With speculation rife about the end of asset purchases, Draghi may also be asked whether a gradual pull-out from one of the bond-buying programs has already begun. A recent report from Deutsche Bank economists suggested the ECB is starting a “stealth taper” to wean the European bond market off corporate-debt purchases. The pace of buying has fallen by half so far this month.