Investors are in the grip of a much-awaited selloff in Italian bonds, a market that had been resilient in the face of weeks of political uncertainty since Italys general election in March.

Bond prices are falling and yields rising as Italys far-right League party and anti-establishment Five-Star Movement are close to reaching a deal to form a euroskeptic government. The strictly populist outcome likely presents a tail risk to holders of Italian bonds and assets, said analysts, many of whom thought a gulf in policy platforms would keep the two populist parties from joining sides. Up to now, Italys main political blocs showed few signs of coming together.

The near-term risk for [Italian bonds] is heavily skewed to the downside. A populist-led government could widen [yield] spreads dramatically, said strategists at Soci茅t茅 G茅n茅rale, particularly as investors seek relative safety, even if sacrificing yield, outside of Italy.

The Italian 10-year government bond yield
TMBMKIT-10Y, +0.00%
rose 5.9 basis points to 1.938% Thursday, a seven-week high. The selloff has helped the yield spread between Italian debt and its German peers
TMBMKDE-10Y, +0.00%
expand to 137 basis points, the largest gap in seven weeks, from a low of 114 basis points in April 24, according to Tradeweb data. Bond prices fall when yields rise. 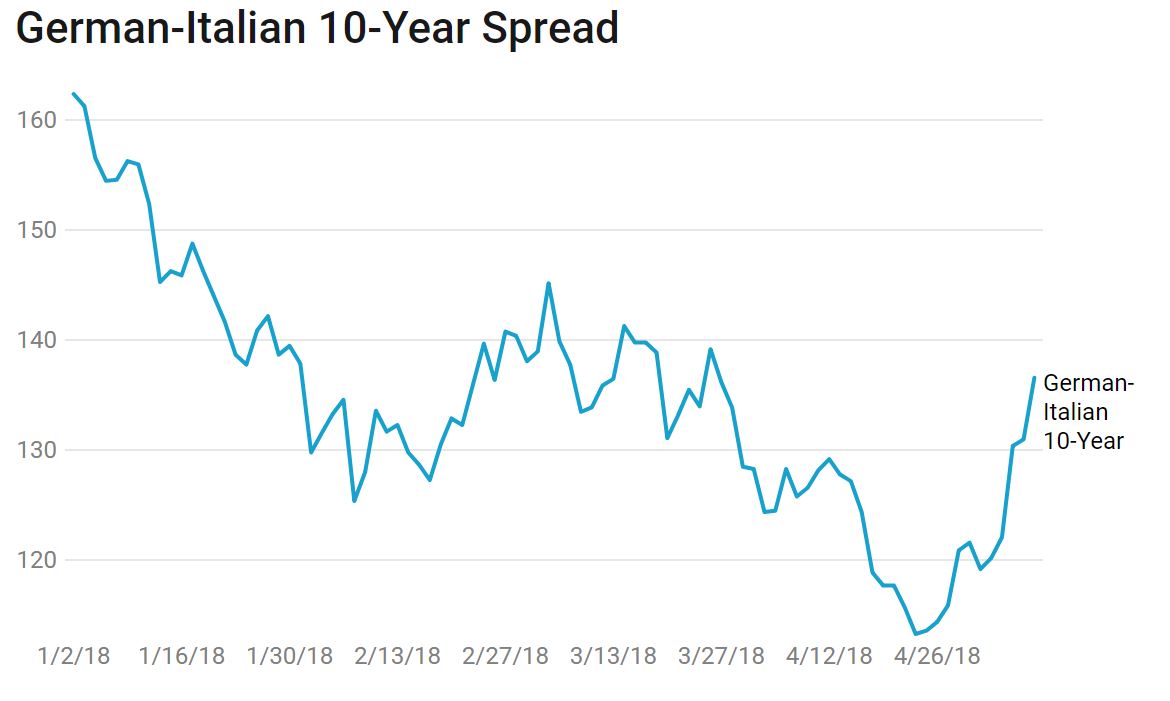 Before this week, Italian bondholders seemed to ignore the risk of a euroskeptic party leading the third largest economy in the eurozone if only because the possibility seemed remote. This allowed the German-Italy yield spread to steadily compress in March and April.

What has been surprising is the markets cool reaction to Italys political uncertainty, and more importantly the prospect, raised at several points over the past few weeks, that a government could be formed with the anti-establishment [Five-star Movement] at the helm, said Nicola Mai, head of sovereign credit research in Europe for Pimco, in a note dated last Wednesday.

Analysts nonetheless had warned a coalition between the two parties could disrupt Italys tentative economic recovery and potentially threaten the viability of the eurozone. Support for the economic bloc has steadily slipped in Italy after years of budget cuts and slow growth. That led strategists at Natixis to estimate the Italian 10-year bond yield would climb 50 basis points if the League and the Five-Star party got together.

The relative calm in the Italian bond market prior to the recent selloff mostly came on the back of improved sentiment over European growth and upgrades to the credit ratings in Spain and Portugal, which share the label of peripheral eurozone countries along with Italy.

Things have been going pretty well in Europe, and weve had ratings upgrades in the sovereigns. Italy was kind of swept along with that sentiment, despite them being in a political deadlock, said Robert Tipp, head of global bonds at PGIM Fixed Income.

Moreover, the positive economic sentiment buoying the eurozone and the European Central Banks bond-buying had kept away short sellers who might have otherwise saw the allure of betting against bonds backed by an economy weighed down with bad loans and an anemic banking sector.

With what was once dubbed a tail risk now becoming a reality, it seems the short sellers have returned to Italys doorstep.

But Tipp remains sanguine as he clarifies that the tail risk was not so much the populist parties forming a majority, but whether they could agree on a range of steps that are really going to shake the economic establishment in Europe. If they strike a deal to just agree on a narrow set of agenda items, then spreads could still tighten.