Kroger(NYSE:KR) is working hard to transform its business so that it can better compete in today’s multichannel selling environment. This shift threatens to lower the retailer’s overall profitability, but it also opens the supermarket chain up to new growth areas such as home delivery of groceries and prepared food. 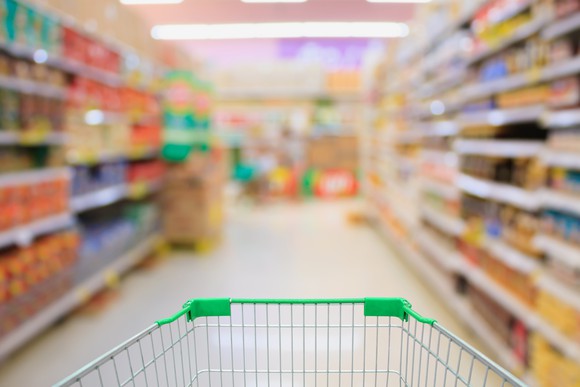 More on that brighter forecast in a moment. First, here’s how the latest results stacked up against the prior-year period:

Sales growth slowed for the first time in over a year but remained right within management’s forecast range. Kroger’s profitability held steady, too, as increased spending in areas like wages was offset by cost cuts in other parts of the business.

Highlights of the quarter include:

Comparable-store sales, or sales at existing locations, rose 1.4% to mark a slight deceleration from the prior quarter’s 1.5% gain. After including sales from its pharmacy and e-commerce channels, that growth figure rises to 1.9%, or roughly even with rival Walmart’s (NYSE:WMT) latest 2.1% increase. Digital sales, a major growth initiative for the company, rose 66%. After accounting for unusual financial events like pension plan adjustments and the gain from Kroger’s sale of its convenience store segment, profitability held steady. Earnings improved to $626 million from $546 million on this basis, and that growth was boosted by heavy share-repurchase spending so that adjusted per-share earnings rose 26% to $0.73 from $0.58 a year ago.
Management’s comments

Executives had positive things to say about the early results from their rebound initiative, which they refer to as “Restock Kroger.” This plan leans heavily on in-store brands to support customer loyalty while also attacking the e-commerce sales opportunity. “Restock Kroger is off to a fantastic start,” CEO Rodney McMullen said in a press release.

“Kroger is creating the future of retail,” McMullen continued, “by innovating our core business and adding exciting partnerships like Ocado and our planned merger with Home Chef.” Management also highlighted success they’ve had in working with Instacart to increase their grocery-delivery coverage area.

Kroger raised its 2018 earnings forecast slightly to account for the fact that cost controls are generating more savings than management originally expected. The retailer left its full-year sales growth outlook unchanged, and it still calls for the expansion pace to roughly double to between 1.5% and 2%. However, management said that going forward that core growth metric will include e-commerce sales. The shift will better capture the retailer’s overall growth rate while aligning it with the way peers like Walmart and Costcocalculate their comparable-store sales, they explained.

Using the new comps metric, Kroger is now expecting sales to rise between 2% and 2.5% this year, which would imply a 14th consecutive year of modest market share gains. That figure would keep it roughly on pace with rival Walmart, but far below the 7% growth that Costco has been logging lately. The slow expansion pace won’t power much in the way of earnings gains, but Kroger is on track to make significant progress in boosting other financial metrics, especially free cash flow, this year.