Want to know how to succeed in investing? Focus on the future, not the past.

For pharmaceutical companies, the future can be found in their pipelines. These companies spend billions of dollars over many years to discover, develop, and hopefully one day market new drugs. It’s not an easy task, however, to accurately predict how successful pipeline candidates might be.

That difficulty hasn’t stopped market research firm EvaluatePharma from trying, though. EvaluatePharma recently published a list of the drugmakers with the projected highest value creation from pipelineproducts between 2018 and 2024. Here’s why Novartis (NYSE:NVS), AbbVie (NYSE:ABBV), Celgene (NASDAQ:CELG), AstraZeneca (NYSE:AZN), and Amgen (NASDAQ:AMGN) ranked at the top. 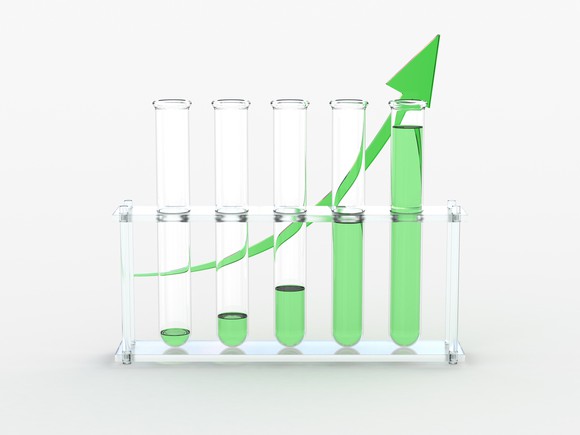 Novartis is projected to generate accumulated sales of $22.9 billion from its pipeline products over the next seven years. The Swiss drugmaker claims more than 200 programs in clinical development, withbrolucizumab and siponimodstanding out as especially great candidates.

Brolucizumab could be launched in 2019 for treatingneovascular age-related macular degeneration (nAMD), if approved. The drug’s performance in phase 3 clinical studies indicates that it could give Regeneron’sblockbuster Eylea a run for its money.

Siponimod is Novartis’ late-stage candidate targeting treatment of secondary progressive multiple sclerosis (MS). The company also hopes to launch the drug in the U.S. next year.

Acquisitions and partnerships should also bolster Novartis’ fortunes. The drugmaker’s purchase of AveXis in April 2018 brought promising spinal muscular atrophy gene therapy AVXS-101 into the pipeline. Novartis’ collaboration with Amgen on migraine drug Aimovig also should pay off in a major way.

AbbVie expects Food and Drug Administration (FDA) approval for elagolix in treating endometriosis by the third quarter of this year. The date slipped by three months due to the FDA requesting more time to review additional data from liver-function tests. AbbVie also is evaluating elagolix for treatment of uterine fibroids.

Humira currently claims the title as the top-selling drug in the world and probably still will in 2024. However, AbbVie thinks that risankizumab and upadacitinib could be worthy successors to Humira. Both drugs are projected to generate sales topping $2 billion by 2024.

Celgene moved up six spots from EvaluatePharma’s 2017 ranking to take the No. 3 position for big-pharma companies with the strongest pipelines. The biotech’s pipeline products are projected to generate revenue of $15.4 billion between 2018 and 2024.

Although Celgene experienced an embarrassing setback with the FDA rejecting the submission for ozanimod earlier this year, the drug should still be a big winner in treating multiple sclerosis. Celgene expects to submit ozanimod again in Q1 of 2019.

JCAR017 (also known as lico-cel) and luspatercept are two other highly prized pipeline candidates for Celgene. EvaluatePharma ranks cancer-fighting cell therapy JCAR017 in the top 10 most valuable pipeline assets, while blood disease drug luspatercept took the No. 15 position on the list.

EvaluatePharma moved AstraZeneca down a couple of spots from last year’s list after the British drugmaker experienced a pipeline setback with a combination of Imfinzi andtremelimumab as a third-line therapy for non-small cell lung cancer.And the ranking came out prior to AstraZeneca’s and Lilly’s recent late-stage failure withexperimental Alzheimer’s disease druglanabecestat.

However, AstraZeneca still has a loaded pipeline that EvaluatePharma projects will rake in $14.8 billion in total sales over the next seven years. The market research firm especially likes the prospects for roxadustat and ZS-9 (known now by its brand name Lokelma).

Roxadustat is an anemia drug being developed by AstraZeneca and partner FibroGen. The two companies plan to file for approval of the drug in the first half of 2019.Lokelma won FDA approval in May for treating hyperkalaemia(high potassium levels).

Amgen didn’t even make the top 10 on EvaluatePharma’s 2017 pipeline ranking. Now, though, the big biotech’s pipeline is projected to generate accumulated sales of $13.7 billion between 2018 and 2024. What happened to boost Amgen’s prospects?

For one thing, Amgen struck a deal in September 2017 with AbbVie that allows Amjevita, a biosimilar to Humira, to go on sale in Europe later this year. Amjevita also will begin competing in the U.S. market in 2023. In addition, Amgen’s pipeline includes several other promising biosimilars.

As mentioned earlier, Amgen and Novartis also have a big potential winner with migraine drug Aimovig, which won FDA approval in May. EvaluatePharma projects the drug will make nearly $1.2 billion by 2024.

There are two problems with investing in big pharma stocks solely because of their promising pipelines. First, candidates could flop in clinical studies. AbbVie saw this happen earlier this year with cancer drug Rova-T. Second, it’s also important to consider the status of drugmakers’ current products.

Novartis, for example, faces generic competition for leukemia drug Gleevec and the potential for generic rivals for multiple sclerosis drug Gilenya. AstraZeneca already is experiencing declining sales for several of its older products, such as cholesterol drug Crestor and diabetes drug Onglyza.Amgen likely will soon see biosimilar competition for its top-selling drug Neulasta, and its third-best-selling product Sensipar lost patent exclusivity in March.

All five of these big pharma companies have great pipelines. However, I think that only two of them have great growth prospects overall and are the best stocks to buy — AbbVie and Celgene.