The connected-car revolution is upon us, as the number of vehicles going online and talking to one another will spike rapidly in the coming years. IHS Markit estimatesthat sales of connected cars will triple to 72.5 million units in 2023 from 24 million units in 2015, which means that an estimated 69% of passenger vehicles sold globally will be receiving and sending data using sensors.

These sensors need analogcircuits to talk to one another and send data to the vehicle’s computer, so they will stay in strong demand. One way to invest in the connected car boom is throughMaxim Integrated Products (NASDAQ:MXIM), ananalog integrated circuit vendor.

The chipmaker has displayed remarkable growth in its automotive business over the years as the semiconductor content in vehicles has increased. In fact, the automotive sector has been the key to its financial resurgence over the past year, setting the stage for stronger long-term growth as the connected car market gains momentum. 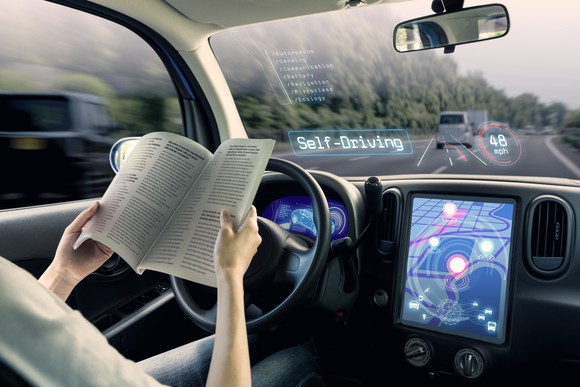 Maxim divides its revenue into five segments. Just four years ago, automotive was one of its smallest end markets, supplying just8% of the top line. But now, it accounts for 21% of total revenue, becoming its third-largest source of revenue after its industrial and consumer businesses. What’s more, automotive is Maxim’s fastest-growing business, and its increasing clout has been important in boosting the company’s top line in the past year.

Maxim expects its automotive business to grow in the low teensin the long run. The automotive sector accounted for an estimated $131 million of Maxim’s revenue last quarter(21% of the total revenue), so it now has an annual run rate of over $520 million. Assuming that this business clocks an annual growth rate of even 10% over the next five years — conservative by Maxim’s standards — it could generate annual revenue of almost $840 million for the company.

This means that Maxim’s automotive revenue could increase as much as 60% in the next five years. More important, the chipmaker has the tools to achieve such solid automotive growth thanks to an impressive clientele list that includes self-driving car pioneer NVIDIA (NASDAQ:NVDA).

Why Maxim’s automotive growth is secure

Maxim claims to have scoreddesign wins at 28 automotive original equipment manufacturers around the globe, and they are producing more than 70 different car models using its chips. And some of its customers haven’t yet released their models featuring Maxim’s designs.

But the biggest boost for Maxim could come from NVIDIA, which recently decided to use the former’s high-speed integrated circuits to enable high levels of automation in self-driving cars. NVIDIA plans to use Maxim’s expertise to power its DRIVE Pegasus and Xavier platforms, which can help self-driving cars attain Level 4 and Level 5 autonomy. Maxim claims that its integrated circuits are tailor-made for this application.

More important, the partnership gives Maxim access to NVIDIA’s ecosystem of 225partners that are developing autonomous car solutions based on the latter’s hardware and software platforms. And NVIDIA has kept boosting its automotive presence by striking deals with big players such as Uber to supply autonomous car systems.

Uber expects to deploy 24,000 self-driving SUVs in the next three years, and it is highly likely that NVIDIA will power the autonomous systems in these vehicles based on their recent partnership. So, Maxim is getting access to an automotive gold mine with NVIDIA’s help.

Another catalyst that should give Maxim’s automotive business a long-term boost is the electric vehicle (EV) market. The chipmaker estimates that EV-related sales constitutejust 10% of its total automotive revenue at present, but they are on track to gain impressive momentum thanks to the growing demand for battery management systems (BMS).

The BMS is the brain of the battery pack that powers EVs. It manages a bunch of functions including charging and discharging, and gives the battery pack a longer life by keeping it within its safe operating zone. Not surprisingly, the BMS market is expected to grow at a compound annual growth rate of almost 21% over the next five years as EV sales increase, hitting$7.25 billion in value by 2022.

So, there’s a lot to like about the way Maxim’s automotive business is shaping up, but it is the company’s valuation and its dividend that should seal the deal for potential investors.

Maxim Integrated has been a fairly expensive stock over the years. It carries a trailing price-to-earnings(P/E) ratio of 43, which is in linewith rival Analog Devices. However, the stock is currently expensive as compared to the semiconductor industry’s average ratio of 35. But Maxim tradesat a cheap 19 times forward earnings, which clearly points toward bottom-line growth.

This year, for instance, Maxim’s earnings are expected to increase 25%. And it is expectedto clock a solid 15% annual growth rate over the next five years. Finally, Maxim has a handsome dividend yieldof 2.90%, and it looks set to become a solid dividend play over the years, thanks to management’s decision to return allof its free cash flow to investors.

The company recently raised its quarterly dividend by 17% as its free cash flow has jumped27% during the trailing 12 months to $849 million. By comparison, the company has paidout $389 million in dividends over the past year, which means that it has so far paid almost 46% of its free cash to investors in the form of dividends.

So, the consistent increase in Maxim’s earnings should boost its free-cash-flow profile going forward, which should lead to a higher dividend payout.

The verdict: A solid bet

Maxim Integrated’s automotive segment has a lot going for it. The company estimates that the semiconductor content in each car will doubleto $200 in the next five years as the adoption of advanced driver assistance systems and infotainment systems increases in connected cars and self-driving vehicles.

Maxim is on track to ride this opportunity thanks to a terrific client base. And it will pay investors handsomely with a solid dividend yield at the same time, which makes it a good investment considering the valuation.