Microsoft (NASDAQ:MSFT) released its first Surface product, known as the Surface RT, in October 2012. Shortly thereafter, in early 2013, the company introduced the Surface Pro — a higher-end hybrid laptop and tablet that ran the full version of Windows (rather than the restricted version found on the Surface RT).

While the Surface RT wasn’t particularly successful — in the fourth quarter of its fiscal year 2013, the company suffered a “$900 million charge, or a $0.07 per share impact, related to Surface RT inventory adjustments” — the company’s Surface Pro product line has endured over the years. 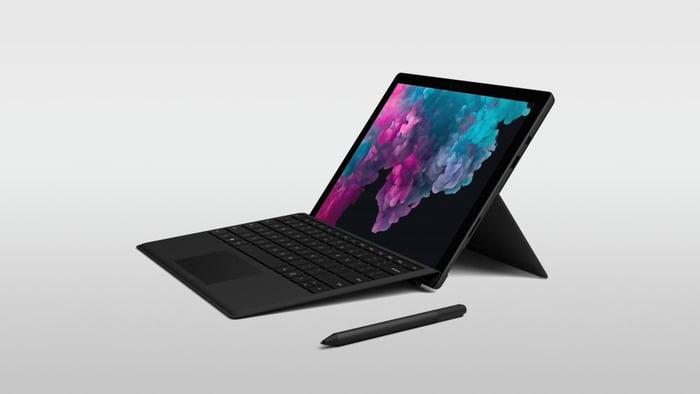 Over time, Microsoft has expanded its Surface product portfolio to include the Surface Book and Surface Laptop portable computers as well as the Surface Studio, which is the company’s take on a premium all-in-one desktop computer.

According to new data from Gartner (NYSE:IT), Microsoft became the fifth-largest PC vendor by unit shipments in the United States during the third quarter of 2018. Let’s take a closer look at the results.

A nice milestone for Surface

Now, before you get too excited, Microsoft wasn’t in the top five vendors worldwide — only in the United States. Nevertheless, considering that the company is a relatively new entrant into the market (the top players in the PC market have been selling systems for far longer than Microsoft has), this seems like a solid achievement.

According to Gartner, Microsoft shipped 602,000 PCs in the United States during the quarter, giving it a 4.1% market segment share. Gartner reported that in the same quarter last year, ASUS — a well-known brand in the PC market — held the fifth-place spot in the region.

While Gartner’s third-quarter 2018 data shows that overall PC shipments declined by 0.4% in the United States, Microsoft saw its PC shipments increase by 1.9%. Accordingly, the company estimated that Microsoft enjoyed a market segment share boost from 4% to 4.1% in the region.

It’s worth noting, too, that Microsoft largely plays in the premium portion of the PC market with its Surface offerings, while major PC makers tend to offer everything from low-cost systems to premium-priced competitors to Microsoft’s Surface lineup.

Microsoft has offered lower-cost Surface products in the past (e.g., Surface RT, Surface 2, and Surface 3) and recently released a new product aimed at that segment, called the Surface Go, but I’d imagine that Microsoft’s Surface average selling prices are meaningfully higher than those of the other Windows PC manufacturers. If that’s the case, it’d suggest that Microsoft’s PC revenue share within the United States is higher than its unit share.

It’s hard to imagine that Microsoft will be able to capture the kind of PC market share that, say, HP Inc (NYSE:HPQ) or Dell enjoy worldwide. Those companies offer far broader PC product lines than Microsoft does with its Surface lineup, targeting many different price points, use cases, and form factors. That breadth allows those PC giants to go after far more business than Microsoft can with its current lineup.

For example, if you go to HP’s website (HP was the top PC vendor in the United States and the second-largest worldwide in the third quarter, per Gartner), you’ll notice that within laptops HP offers the following categories:

Additionally, within desktops, HP sells products under these categories:

Microsoft would need to invest substantially more in both product development as well as marketing and distribution if it wants to compete against the likes of HP and Dell.

So, while Microsoft seems to have captured a solid amount of share in the United States with its Surface lineup, there could be a relatively low ceiling as to what its overall PC market share can be without a dramatic shift in business strategy.