Almost two-thirds of Americans expect to leave some of their allotted vacation time unused this year, and if you ask them why, they’ll offer plenty of reasons. Lack of money, though, tops the list: Specifically, nearly one out of four U.S. workers say they won’t be taking time off this summer because they can’t afford it, according to a new Bankrate.com report. Other common explanations people gave included having too many family obligations (12%) and being too busy at work (11%).

Unsurprisingly, the biggest issues varied quite a bit based on demographics. Younger workers, those making less money, the less educated, and minorities were most likely to point to finances as the chief cause for their vacation-less summers.

“While Millennials (ages 18-37) without summer vacation plans are the most likely to point to money as ahurdle, they are also the most inclined to say they’re too busy at work to take time off,” according to the survey. “Gen Xers (ages 38-53) and Baby Boomers (ages 54-72) are more likely to cite family obligations than work obligations as a hindrance.” 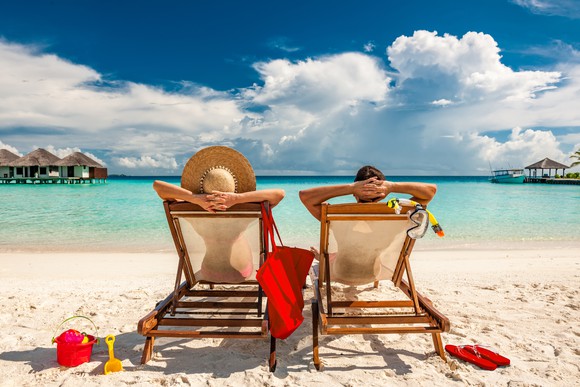 A vacation can just be not working. It does not have to involve a big trip. Image source: Getty Images.

Americans are bad at taking time off

While finances, family obligations, and being busy at work are all reasonable excuses for not taking a summer vacation, the may be just that — excuses. Just 36% of American workers think they’ll use all of their allotted vacation time this year, according to the Bankrate survey. On top of that, 26% expect that they’ll use a quarter or less of the time off they’re entitled to, and 13% of those expect they won’t use any of it.

“It’s important for Americans who have vacation time to use it, even if it’s for something as low-key as a ‘staycation,'” said Bankrate.com analyst Amanda Dixon in a press release. “Otherwise, it’s almost like you’re leaving money on the table.”

It’s not all bad news

Just over half of Americans (51%) do plan on vacationing this summer, with the median outlay for those breaks coming in at $1,000. About one-quarter of those who expect to take a vacation (24%) plan to spend more than $2,000. Parents of young children, people between the ages of 28 and 53, higher earners, and the highly educated are among the most likely to take time off.

Those who point to their overfull work schedules as a reason for powering through nonstop would do well to recognize that doing that can lead to burnout and diminished work performance. Vacations don’t need to be expensive: A simple staycation where you sleep late, and catch up on your favorite TV shows or the movies you missed in the theaters might be just what you need to recharge your batteries.

Of course, if you have children, you may not have the luxury of simply doing nothing. And it goes without saying that raising kids is expensive. Even so, if finances are limiting your options, don’t let that be your excuse to skip the breaks altogether. Whether you’re spending time at a community pool, a public park, or at a pricey beach resort, the important thing is to break out of your normal routine, reconnect with your loved ones, and relax a little.

Failing to take vacations doesn’t just impact your work performance — it can actually be detrimental to your health. It also sends a message to your employer that you don’t need time off, and that’s not a message you want to send.

So if your employer gives you vacation days, by all means, use them. Work will be there when you get back, and you’ll be in a better position to handle it.