Nintendo is going low-tech for its newest line of video game accessories.

The Japanese company has unveiled a series of DIY cardboard toys for its wildly popular Switch gaming console.

Assembled from sheets of cardboard, the accessories are designed to interact with the Switch and its Joy-Con controllers in a variety of ways.

For example, one toy is a 13-key cardboard piano that the console and controllers slot into. After putting it together, users can press the cardboard keys, and musical notes come out of the console. 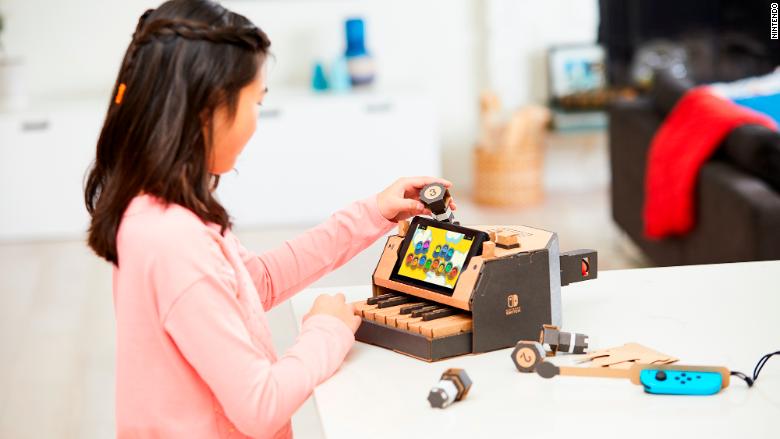 Another kit builds an interactive robot suit with a visor, backpack and straps for the user’s hands and feet. When a person wears it, a giant robot on the screen mimics her moves.

Nintendo calls the line of cardboard products “Toy-Cons.” They go on sale April 20.

“It is an exciting evolution of the Nintendo Switch platform — one designed to inspire curiosity, creativity and imagination in people of all ages,” Nintendo America president Reggie Fils-Aime said in a statement Wednesday.

“It shows that Nintendo is, at its core, a toy maker,” Toto said.

This is not the first time Nintendo has produced simple toys. The company sold paper planes and cars that required assembly back in the early 1970s.

“Nintendo is famous for digging in its own history to come up with innovations. This is a company that is really thinking in decades,” Toto said.

The new toy kits are priced at $70-$80, and have the potential to become another source of high-margin revenue to help Nintendo’s bottom line.