Oil prices and the U.S. dollar are rallying in tandema dynamic that has only occurred 11 times since 1983, and its drawing the attention of market participants attempting to assess its significance.

West Texas Intermediate crude oil traded on the New York Mercantile Exchange
CLM8, +3.07%
which is up 12.2% in the past month, according to FactSet data, has shaken off a 3.6% rally in the previously battered dollar, as measured by the ICE U.S. Dollar Index
DX, -0.54%
according to FactSet data. Check out the recent chart below depicting the dollar gauges move and WTIs climbs from Bespoke Investment Group: 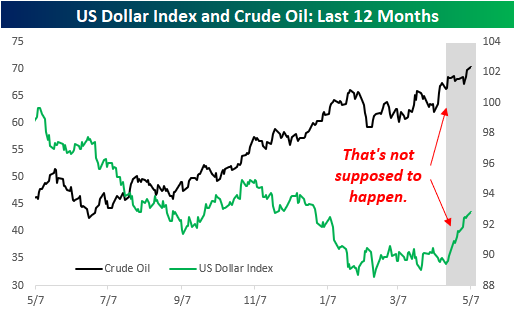 Bespoke put the odd turn in the dollar-oil relationship this way in a May 7 note:

The dollar index, after slumping nearly 10% in 2017 and starting off 2018 with further weakness, has been on the rebound, hitting a string of four-month highs. In part, thats due to expectations the Federal Reserve is unflinchingly on track to deliver at least two, if not three, more rate increases in 2018. Higher rates can make the buck more attractive to investors looking to park money. The dollar gauge remains off 6.5% over the past 12 months, to be sure.

See: How much juice is left in the dollar rally?

Meanwhile, crude has rallied as production curbs instituted by the Organization of the Petroleum Exporting Countries and other major oil producers appears to have achieved the desired goal of absorbing a glut of crude that helped crush prices of both international benchmark Brent oil
LCON8, +2.98%
trading on the ICE exchanged and U.S. listed WTI back in 2014

Read: Why the unloved energy sector is primed for success

Check out: Oil prices have surged above $70here are 4 key reasons behind the rally

In a research note on Wednesday, Jeffrey Saut, chief investment strategist at Raymond James, said while the simultaneous rally is rare, it isnt unprecedented.

Saut said Raymond James remained upbeat on the outlook for commodities overall, particularly energy-related stocks, which he argued have been underinvested and underloved.

Others, however, have questioned the significance of the correlation:

Nicholas Colas, co-founder of DataTrek Research, said that the tandem march higher by the buck and crude might not last because it has been pegged in large part on bets the U.S. would reintroduce sanctions on Iran.

The divergence between oil and the dollar seems to have been related to the Iran deal. Now that we know what is happening there, well see if the usual historical relationship reasserts itself, he said.

Alarm bells ringing for stocks as correction clock ticks down