Kevin Johnson is not catching a break.

The Starbucks Corp. (SBUX) CEO, one year into his tenure, is in the midst of a full-blown public relations crisis. “Boycott Starbucks” continues to trend on Monday, April 16, four days after a Starbucks employee called the police on two black men in Philadelphia, leading to their arrest and detainment.

Johnson has since issued a public apology and flown to Philadelphia from Seattle to personally meet with the two men, whose confrontation and arrest with the police was caught on film. The incident marks the latest event in a rocky year for the coffee chain, during which domestic sales have slowed and Johnson has dealt with a lawsuit and issues with the company’s mobile app. And while the police incident this week may have angered consumers, investors are much more likely to be concerned with Starbucks’ earnings statement.

“The No. 1 reason for disappointment toward Kevin is the company’s comparable sales and traffic numbers running flat in the U.S.,” Morningstar Inc. analyst R.J. Hottovy said, while the Philadelphia incident appears to be a one-off for the otherwise politically liberal company.

For the most part, however, Johnson has yet to prove himself, according to restaurant consultant John Gordon of Pacific Management Consulting Group. “There hasn’t been enough time, and a lot of the problems we’re seeing with Starbucks now are legacy issues,” he said.

On Thursday, six Philadelphia police officers arrested two black men in a Starbucks after the store manager called 911 to report a trespassing complaint. The encounter was filmed by multiple bystanders, and one video has since been viewed nearly 10 million times. In it, other Starbucks patrons at the time tried to interfere with the arrest, defending the two men and arguing they had done nothing wrong.

Johnson said in an apology statement over the weekend that the company will review its practices and “stands firmly against discrimination or racial profiling.”

“The video shot by customers is very hard to watch, and the actions in it are not representative of our Starbucks mission and values,” he said. “We have immediately begun a thorough investigation of our practices. In addition to our own review, we will work with outside experts and community leaders to understand and adopt best practices.” 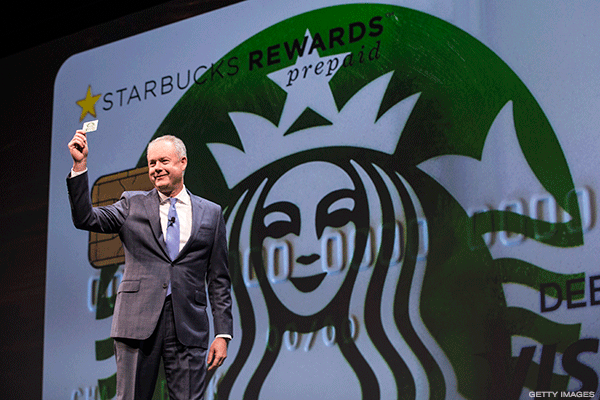 Johnson, so far, has handled this as well as he could have, Gordon said. On Monday, a company spokeswoman told The Philadelphia Inquirer that the store manager who had called the cops is “no longer at that store.”

This wasn’t the first time Johnson has encountered a difficult situation outside of his control in the past year, both Gordon and Hottovy agreed.

There was the Simon Property Group Inc. (SPG) lawsuit, which alleged that Starbucks had violated terms of its lease agreements with the mall landlord when Johnson shuttered all 379 Teavana locations.

“That call could’ve been made under [previous CEO] Howard Schultz, but it was inevitable under Johnson,” Gordon said. The lawsuit was settled earlier this year.

Then there’s the mobile app congestion problem that Johnson had inherited from Schultz, Hottovy said, pointing to the overpopularity of Starbucks’ mobile ordering feature, which drove nonmobile customers out of stores.

If Johnson were to prove himself in the second year, nonetheless, it would be through improving domestic sales numbers.

“The softness hasn’t improved with Kevin. If that continues, there’ll be mounting pressure from shareholders,” Hottovy said.

Starbucks shares were up slightly Monday afternoon, trading at $59.40.