A big swing state is gearing up for legalized pot sales in the next couple of months.

It could quickly become one of the biggest markets for marijuana nationwide.

But first lets take a look at the cannabis cash cow up north.

Everyone’s gearing up for July 2018 in Canada.

Thats when the Canadian government expects to have legislation in place fully legalizing recreational marijuana use.

By all accounts, they are right on track with their expectations.

As you might expect, Canadian cannabis companies and investors are gearing up for a big year.

The money is flowing heavily into Canadian weed in anticipation of the legislation, and payoffs could be huge for early movers.

Check out the chart below. 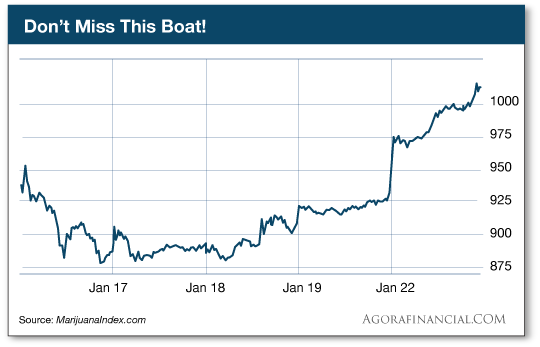 This is going to be one boat you really don’t want to miss.

Now on to news from the Keystone State.

Despite recent volatility in the recreational pot market thanks to Attorney General Jeff Sessions, medical marijuana is off-limits to Washington.

The Rohrabacher-Blumenauer Amendment forbids the Justice Department from using any resources to interfere with state legal medical marijuana until at least January 2019. Its up for extension Feb. 8, the new date for Congress to agree upon a budget and amendments.

There are a few reasons that make Pennsylvanias new MMJ law something special.

For starters, its the fifth-most populous state in the country that fact alone makes it an important new venue for weed sales. The states MMJ bill is also fairly permissive in terms of the ailments itll be allowed to treat.

Estimates put together by Marijuana Business Daily say the states dispensary sales could exceed $100 million annually once the program matures.

Finally, Pennsylvanias MMJ program is significant because its happening in a political battleground state.

The bipartisan way that medical marijuana was legalized in PA is indicative of the shifting public sentiment for pot. (Nearly 70% of Americans believe in some form of legal marijuana.)

Pennsylvania plans on issuing licenses for up to 150 dispensary locations and 25 grower licenses for its medical pot program. Simply put, were mere months away from medical pot coming to be in one of the biggest states in the country.

Thats a positive step for all the pot companies in our portfolio, even if they dont have direct exposure to Pennsylvania.

Meanwhile, as many expected, the policy shift from Jeff Sessions could actually be the catalyst for legalizing pot on a national level.

New bipartisan legislation has been announced in both houses of Congress that could finally remove the federal restrictions on marijuana, leaving pot regulations up to the states.

Its a developing story.

Ill keep you posted as it continues to unfold.

2018 is offering tons of opportunities to strike it rich off exploding penny pot stocks.

Rays identified one specific $0.12 stock that could start you on the way to riches in months!