Shares of Tesla (TSLA ) opened higher on Monday morning, only to sink later on, after the company announced that it produced more than 5,000 Model 3 vehicles during the last seven days of the second quarter. Now, the question is should investors buy Tesla stock since the electric vehicle firm finally reached its production goal for its mass-market Model 3 sedan.

Tesla released its production and delivery totals for the second quarter on July 2, roughly a month before the company is expected to report its Q2 financial results. Tesla said that it produced 5,031 Model 3 cars over the last seven days, topping its 5,000 goal for the first time.

Tesla produced a total of 53,339 vehicles during the second quarter, which marked a 55% sequential surge. Tesla also manufactured 28,578 Model 3 vehicles in the quarter. Tesla noted that this was the first time Model 3 production topped combined Model S and X rates, helping it make Q2 “the most productive quarter in Tesla history by far,” according to a company statement.

Tesla noted that its new general assembly line, GA4, accounted for approximately 20% of Model 3 production during its goal-breaking week. Looking ahead, Tesla expects that its GA3 production line will be able to reach a 5,000 Model 3 per week rate on its own very soon.

In total, Tesla delivered 18,440 Model 3s, to help bring its Q2 total to 40,740 vehicles. Investors should note that this came in well below Goldman Sachs’ (GS ) analyst David Tamberrino’s estimate of as many as 28,000 Model 3 vehicles. Meanwhile, Tesla said that its Model S and X deliveries were in line with its own guidance.

Tesla also reaffirmed its target of 100,000 Model S and Model X deliveries in 2018. Meanwhile, the electric vehicle company expects to up its Model 3 production rate to 6,000 per week, as soon as next month. Furthermore, Tesla recommitted to its guidance of positive GAAP net income and cash flow in Q3 and Q4.

Investors should be very pleased now that the company finally surpassed its long-held Model 3 production rate. Model 3 production looks even better considering that when Tesla announced its Q1 vehicle figures in early April that it had produced just 2,020 Model 3 vehicles within the previous seven days.

The Model 3, which starts at $35,000, is by far Tesla’s most-affordable vehicle. The mass-market sedan is also the reason that investors and the company believe that it will be able to take on the likes of General Motors (GM ) , Volkswagen (VLKAY ) , Ford (F ) , Toyota (TM ) , and other more established automakers in the electric vehicle market for years to come.

Our current Zacks Consensus Estimates are calling for Tesla’s Q2 revenues to climb by over 41% to hit $3.94 billion—which could change based on Tesla’s recently-released second-quarter production and delivery figures. Looking ahead to the full-year, Tesla’s revenues are expected to reach $18.48 billion, which would mark a roughly 57% climb from fiscal 2017’s total of $11.76 billion.

With that said, investors should remember that Tesla is not expected to report positive adjusted quarterly earnings until next year. Tesla is projected to report an adjusted second-quarter loss of $2.68 per share, as well as a full-year loss of $8.30 per share. However, investors should remember that Tesla’s outspoken CEO Elon Musk recently announced that the company will lay off about 3,500 workers in order reduce costs and become profitable.

Now let’s move onto its recent price movement to help investors understand where the stock currently sits.Shares of Tesla opened higher on Monday morning, but have since flipped, and are currently down 1.7% to $336.88 per share as of the noon Eastern. This should please investors since shares of Tesla now sit roughly 15% below their 52-week high of $389.61 per share.

Jumping back a little, in order to give investors a more complete picture, shares of Tesla are actually only up roughly 20% over the last three years. This comes in below the S&P 500’s 31% climb and might come as a shock to some as it runs counter to the narrative of Tesla’s massive growth and status as a Wall Street darling. 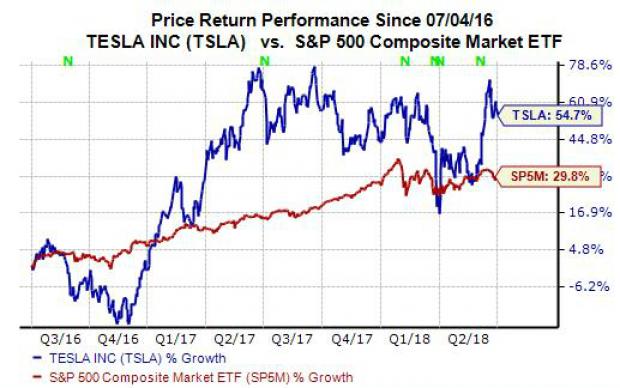 Over the last two years, Tesla has seen its stock price soar nearly 55%, roughly 25% above the index. But investors will notice that during the last year the stock has done very little. In fact, shares of Tesla are down 5% over the last year, in spite of its recent resurgence.

Tesla finally reached its Model 3 production goal and upped its new target to 6,000 per week. This alone might be good enough for some investors to consider buying Tesla stock.

Investors should also note that Tesla, which is currently a Zacks Rank #2 (Buy), is expected to report adjusted positive full-year earnings in fiscal 2019—a great sign for the relatively young automaker. And never forget: the electric vehicle revolution has barely even started.

And this outperformance has not just been a recent phenomenon. Over the years it has been remarkably consistent. From 2000 – 2017, the composite yearly average gain for these strategies has beaten the market more than 19X over. Maybe even more remarkable is the fact that we’re willing to share their latest stocks with you without cost or obligation.