We argued in October last year that the shares of Skechers (SKX), then lingering in the low $20s, were ridiculously cheap, given the growth of revenues, terrific same-store comps, the expansion opportunities, and the solid cash flow, balance sheet and valuation metrics compared to peers.

And indeed, the shares took off, all the way to $40. But two disappointing quarters and the shares are almost back to where they were. This is frustrating, to put it mildly because the company, by and large, keeps expanding sales internationally where there are still plentiful opportunities: 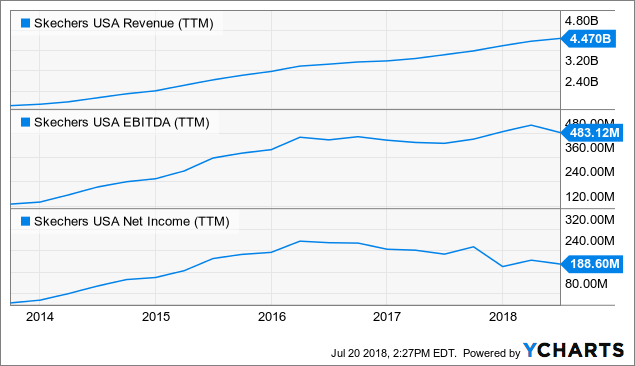 But one also gets an idea of the problems, as net income especially has topped out early in 2016 and is yet to recover as the company has preferred to aggressively invest in growth.

There is a whole host of stuff that went against management, in no particular order:

We’ll discuss most of these below.

Of these headwinds, the rising operating cost is the most significant 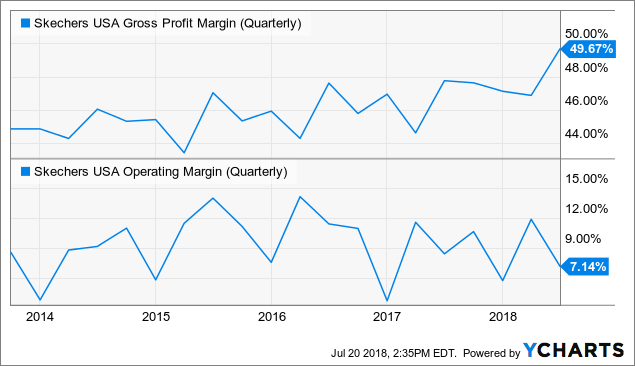 While there is good news from the gross margin front (largely reflecting the ongoing shift to sales overseas), the company keeps on spending to foster that growth overseas, resulting in operational margins once again taking a dive.

Here are some details on other factors that had a negative impact on the disappointing Q2 results.

The only issue we have in the States is our non-core business, the lower price alternatives that weve made some products in the past that takes big hits from so much from time to time. So that thats changed and that environment has changed, and there has been a lot of closeout product in the marketplace that they take.

But management already sees a recovery in the present quarter.

Management believes both domestic wholesale as well as international distributor sales will turn positive in the second half of the year.

FX. There was quite a negative forex swing impact from Q2 2017 which management doesn’t expect to repeat in Q3 and Q4, at least not to the same extent. However, they did warn that next year this could resume with a similar intensity.

Tax. The company is paying considerably more tax (18.8% of sales, up from 16.1% in Q2 2017) than it anticipated when giving guidance for Q2, and worse, this is continuing into Q3 and the year. The Q2 tax guidance was 12%-17%, but the actual rate came in slightly above the top end of that range.

Legal cost. The company settled a case at $6.2M, it didn’t want to go into specifics, but argued this was cheaper than prolonging the juridical path.

While margin expansion is nice, what matters more is whether the company produces results with its investment in growth, and whether the business generates the cash to do so. It clearly does: 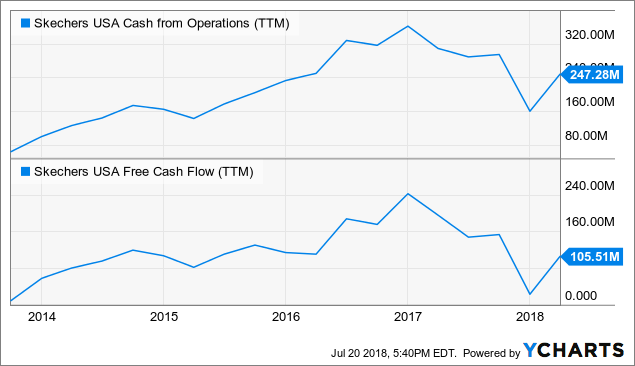 You clearly see that the investments last year took a bite out of cash generation, but that recovered considerably in Q1. 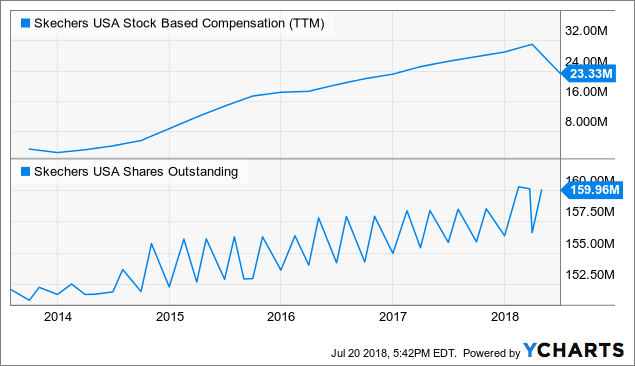 The balance sheet of the company is very healthy, though; the company has $70.2M in long-term debt but it had $887.7M in cash, cash equivalents and short-term investment, a substantial sequential increase of $151.3M (+20.5%).

Another reason for the share price fall was weak Q3 guidance, from the earnings PR:

For the third quarter of 2018, the Company believes it will achieve sales in the range of $1.200 billion to $1.225 billion, and diluted earnings per share of $0.50 to $0.55. The guidance is based on continued strong performance within the Companys international subsidiaries and joint venture businesses, and the Company-owned Skechers retail stores, as well as growth in the Companys international distributor and domestic wholesale businesses in the back half of the year. The Company expects that its effective tax rate for the year will be at the top of or slightly higher than the previously announced guidance of 12 to 17 percent.

We don’t think the company should curtail its investment for the sake of margin improvement, which is what the market is reacting so negatively against. However, we do see some risks ahead:

Currency risk, the euro and yuan are rather volatile against the dollar. Trade tension can quite easily escalate, and China is the company’s main growth market. A global slowdown.

An analyst asked what proportion of production takes place in China, here is management’s answer (Q2CC, our emphasis):

Right now we make about 60% or 65% of our product still in China between the South and Northern China certainly. The United States I believe its about 40% of the production to the United States is outside of China.

We’re not entirely sure about the exact meaning of the second sentence, we assume they are saying that 60% of US sales are manufactured in China.

If that’s true than a yuan depreciation (which is ongoing the last couple of months) isn’t all bad (it does reduce the dollar value of Chinese sales, Skecher’s biggest growth market).

It could still be a net benefit if Chinese sales are less than 60% of US sales. The recent fall of the euro is worse news, as there is a currency translation loss. 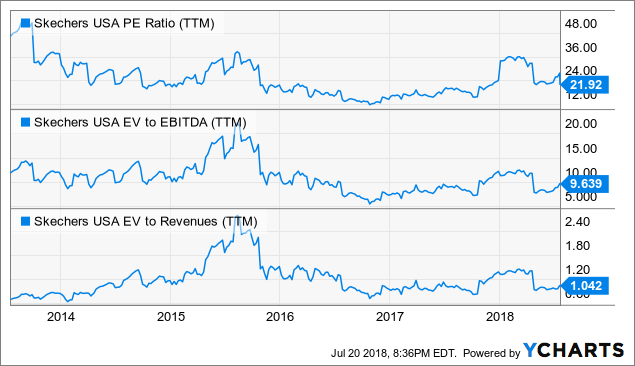 The EV/S seems wrong in the graph, EV is $3.34B, whilst sales the past 12 months were $4.47B, yielding a really low sales multiple of 0.74 for a company that generates substantial amounts of cash flow.

The company prioritizes growth over margins, and in our view, they are right to do so. This involves investment in distribution centers, stores, automation, and especially selling expenses to build the brand.

Despite some operational margin pressure, there are no problems with these investments as cash flow indicates that the company has, and more importantly, generates plenty of funds to spend on investments.

However, last year they clearly argued that this year we would see operational margins return to double-digit territory, so it is also understandable that investors are disappointed.

But we think the market has overreacted twice in a row, from a height of over $40, the stock is back to the mid $20s. Given the growth opportunities and the financial health of the company, the stock is hardly expensive.

We expect a recovery in the shares, although it is probably a slow one until we get a clearer picture about the recovery in international distribution, domestic wholesale and the cost picture in Q3.

Disclosure: I am/we are long SKX.