Shares of Nordstrom, Inc. (NSYE: JWN) got an 8 percent pop on Feb. 23 on news that the Nordstrom family was finalizing an offer to take the company private.

But upon the company board's rejection of the proposal on March 5 and subsequent and termination of discussions, the stock has consolidated even tighter than it had been.

Since that rejection by the board, shares of JWN have traded in a range of $46-$52. That's a $6 range over the course of 45 trading days. Very tight consolidation.

Typically, stocks that consolidate for a period will eventually breakout to the upside or downside. While we won't know which way that'll be until that happens, we can take clues from its recent action.

The following charts are courtesy of VantagePoint, an AI platform that uses intermarket analysis to predict future price action between 1-3 days in advance.

First, a couple of things to note on these charts:

On this 1-month chart, the blue line is predicting what JWN's 6-day moving average will be three days in advance. Notice how the blue line is creeping closer to the black line. This is potentially bearish, but we need to see more. 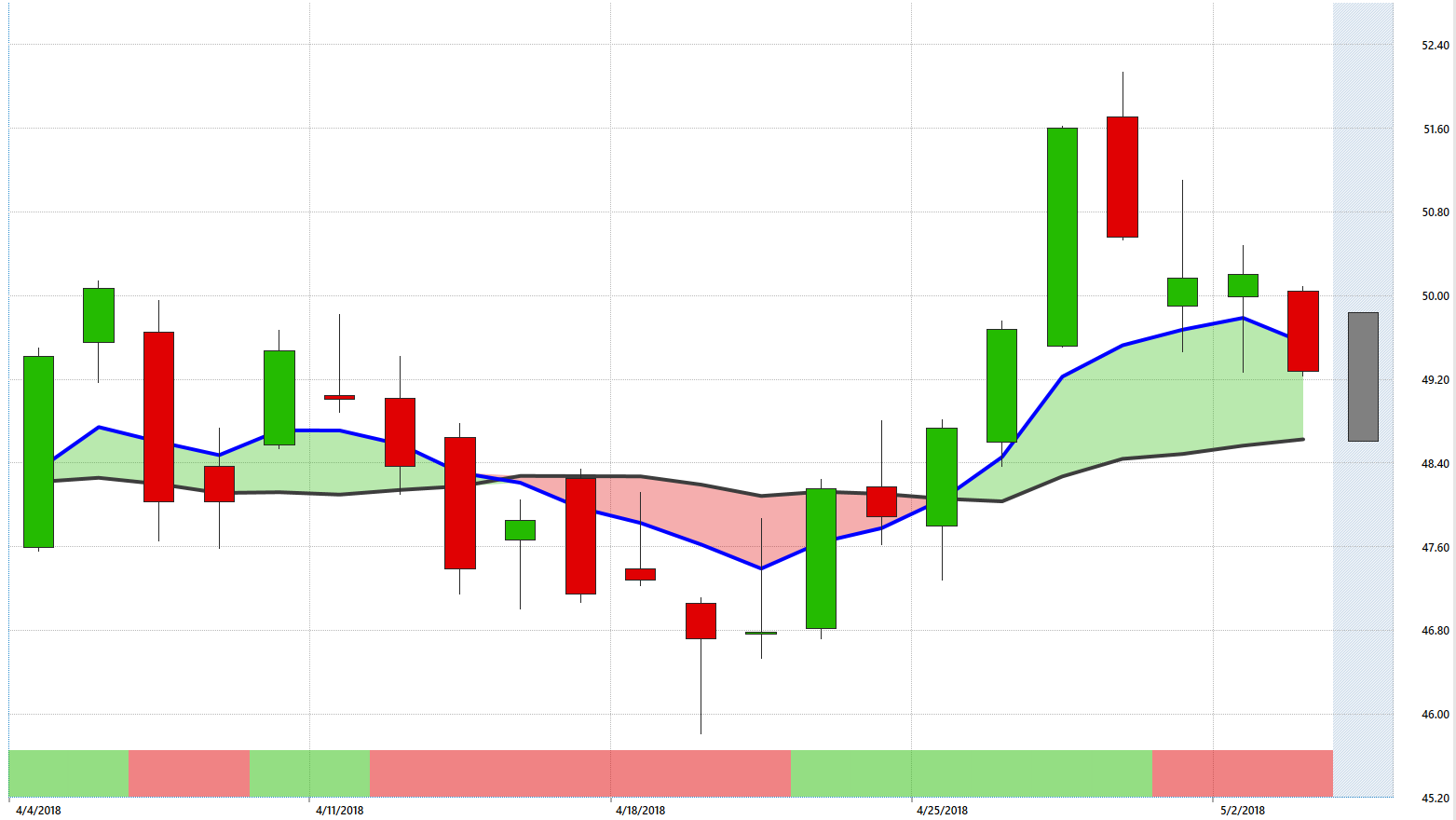 On this chart, the blue line predicts JWN's 6-day moving average two days in advance. Here we can see that the blue and black lines have converged. Not what you want to see if you're a bull.

Here, the blue line is predicting JWN's 6-day SMA at the next day's close. The two lines have already crossed over on Tuesday, indicating that JWN is in for immediate weakness.

As of publication, shares of Nordstrom were trading down 1 percent during Friday's session. They are due to report their Q1 earnings on May 17 after the market close.

Based on FedEx Corporation's (NYSE: FDX) most recent earnings report, you'd think the stock would be performing better.

Not only did the company report an Earnings Per Share figure of $3.72 compared to the consensus estimate of $3.12, their sales figure of $16.5 billion also exceeded Wall Street's estimate at $16.15 billion.

Strong EPS, sales, and guidance? That's usually a recipe for stocks to move higher. But not in this case.

Since its earnings report after the close on March 20, FDX is down about 4 percent. And it only looks to be getting weaker.

The charts below show this. They come courtesy of VantagePoint, an AI platform that uses intermarket analysis to predict future price action between 1-3 days in advance.

Both of the following charts show FDX over the last three months with each candle representing a day. We're focusing on the blue line, that's a predicted moving average.

In the first chart, the blue line is serving as a prediction four 48 hours in advance. Notice how that line crossed below the black line—a simple 10-day moving average—on April 24. That was the start of the most recent bearish trend.

In other words, since April 24 VantagePoint has been predicting FDX's 6-day moving average would be lower in 48 hours than it currently is.

This next chart shows pretty much the same thing, but a little farther out. Instead of predicting FDX's 6-day moving average 48 hours out, it predicts it 72 hours out.

Note the trend shift on May 1. That's a stronger confirmation because it's telling us the stock will be weak until at least next Tuesday's close.

On top of that we have the red-green bar at the bottom of the chart. That's a Neural Index that measures strength and weakness for a 48-hour period. In this case, the move to the red position further makes the case for a potentially bearish scenario.

As of publication shares of FDX were trading flat from Thursday's close. 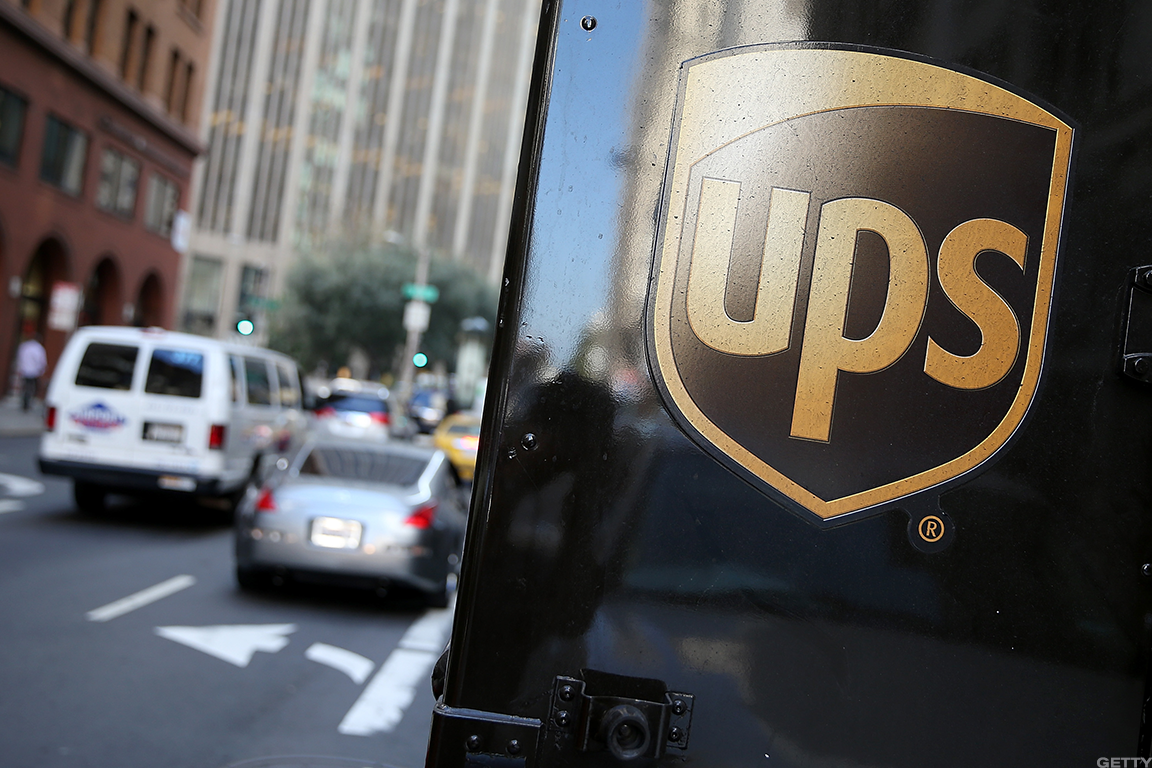 Package delivery giant UPS is getting a boost as it looks to improve its profitability.

United Parcel Service Inc. (UPS) rose on Monday, May 14, as the Atlanta-based company's transformation plan could lead to improved margins, according to Bank of America Merrill Lynch.

Though U.S. stocks are firmly lower early Tuesday, the market price action is more orderly than the headline numbers suggest.

Though the major U.S. benchmarks have flatlined of late, boring remains bullish, and notable technical tests are currently in play. <