Wells Fargo (WFC) is still in the middle of its long-journey amid government-supervised restructuring and has seen little interesting activity as of late. However for investors, as the financial services sector (XLF) this past month has seen a significant downturn, Wells Fargo surprisingly has been at the topic of the pack in terms of return.

I believe Wells Fargo still has major risks involved as it moves to cleaning up its company to government expectations, particularly given how long it took for them to just evade and deflect for years after initial scandal revelations. Furthermore, real growth remains restricted by direct federal regulatory law.

Nonetheless, their lack of upside also shows that in certain situations their downside is limited as well, as they did not experience the growth in expectations and valuation multiples that, when it turned around amid economic and tariff worries, hurt a lot of its peer bulge brackets.

With massive shareholder buybacks and a dividend increase on the horizon too, amid its strong valuation multiple, it actually may serve some purpose in the portfolio as a very unusual-behavior financial stock that provides a slightly less volatile, but more dividend-paying, block. 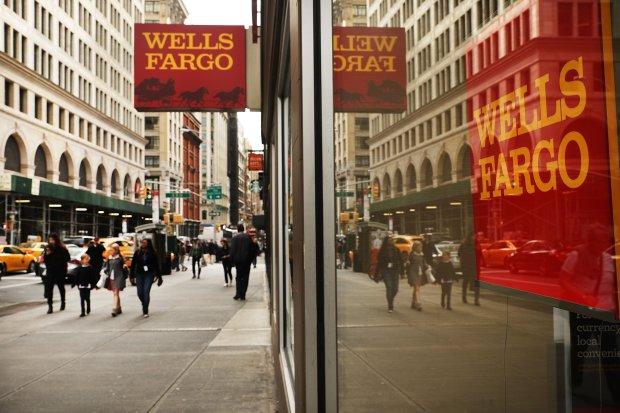 Though Still Leaving Investors Burned In The Medium And Long Run, Wells Fargo Has Sheltered This Month’s Financials Downturn

Wells Fargo has had a strange month. Though still in the middle of the pack among bulge bracket banks YTD and year-on-year, let alone significantly lagging behind on broader timelines, it is actually in fact well above the herd compared to other financials these past few weeks. 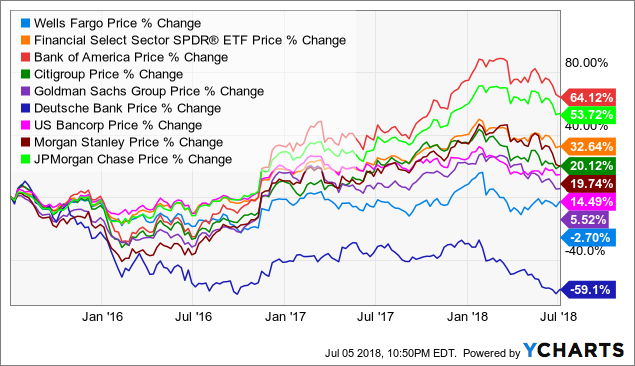 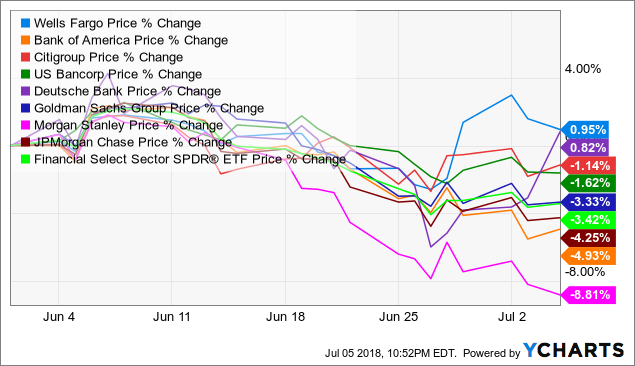 For a bank that has been subject to historic and unprecedented sanctioning over the course of the past few months, the question undoubtedly is in a lot of investors minds over why this unexpected divergence seemingly has taken place.

I believe it is because other banks have recently taken a downturn due to changed growth expectations, as their P/E multiples have shrunk over time separate from earnings report price adjustments.

In contrast, Wells Fargo’s sanctioning has placed a firm upper limit on its profitability, which means it never made, or held on to, the massive rally in the winter and spring of this year that many other financial institutions did and therefore had little to room to fall. 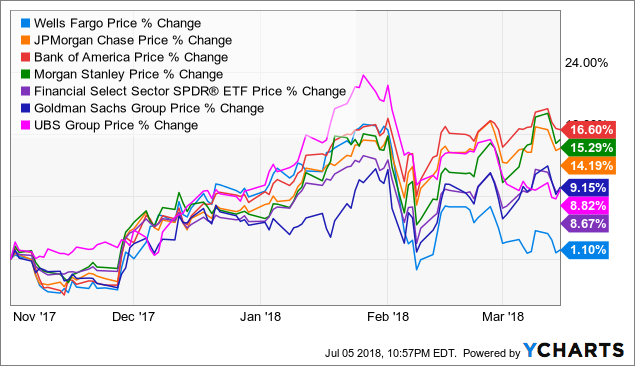 As shown below, Wells Fargo has remained at a relatively steady P/E over the past few months since its initial Federal Reserve sanctioning in late January and early February while the P/Es of other peer bulge brackets have gone down significantly.

Wells Fargo is still among the most lowest P/E multiples right now, as growth expectations remain dim due to the Federal Reserve’s sanctions and various other regulatory concerns precisely limiting, sometimes explicitly, the amount of growth possible. 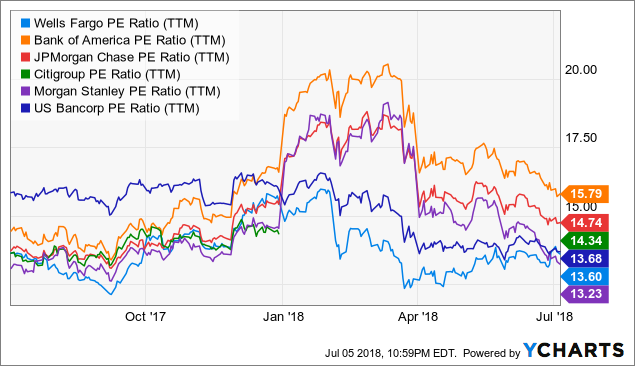 There nonetheless are actually some positive signs for Wells Fargo, or more particularly Wells Fargo shareholders, in the upcoming months. Wells Fargo has gained no-objection approval from the Federal Reserve for a historic $32.8 billion capital return plan to shareholders over the upcoming year. The capital return plan is split between a quarterly dividend increase of 4 cents a share to 43 cents compared to the current 39 cents, as well as $22 billion in shareholder buybacks.

The buyback plan is so large amidst Wells Fargo’s highly-restricted situation because the consent orders in place do not permit Wells Fargo to use its still high-earning capabilities to re-invest in growth in the business, thereby making shareholder capital return the only viable avenue for the money.

At a currently $269.1 billion in market capitalization, the shareholder buyback authorization would amount to almost 8.2% of current outstanding market capitalization. At $55.24 a share, the increase to 43 cents a quarter raises its forward dividend yield to 3.11% from its current 2.82%.

Compared to other financial institutions, the dividend yield actually looks decent even before its increase. 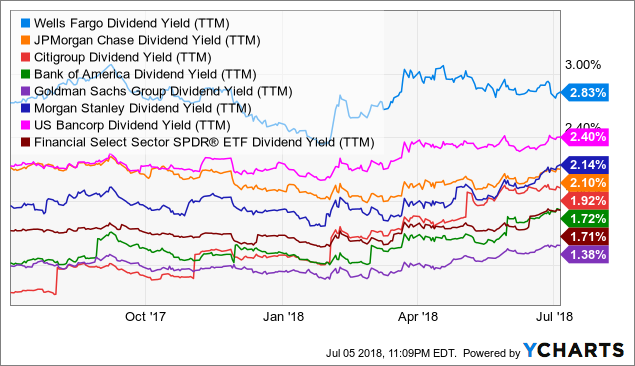 I’ve previously discussed how, depending on the way Wells Fargo’s restructuring goes, it could be in for a long period of uncertainty and potential downturns as its business is reorganized. Nonetheless, it still has a lot of capital to work with as still the third-largest bank in the United States, whether in terms of market capitalization or total assets.

Based on its current unusual financial regulatory situation it seems to have to pay a lot of that out to shareholders, turning it less from having growth characteristics to rather having, ironically, mature dividend-paying characteristics. 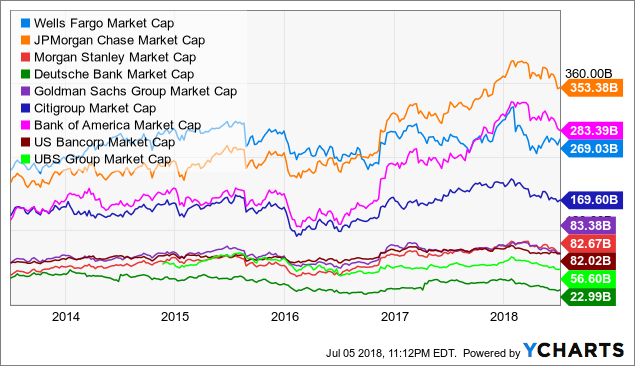 Wells Fargo still has real downside risk amid a broad market downturn, which would also hurt its real earnings on every segment from trading to corporate and consumer services, in addition to its restructuring risks.

But it still offers a perhaps less volatile option beyond those situations, as it is required to shell out capital back to shareholders amid its restructuring. It is also at such a low-valuation multiple, amid seemingly stable business and profit lines, that it likely would have difficulty dropping further in price unless those actual financials were affected.

Wells Fargo’s valuation behavior is unlike that of many stocks out there either presently or in recent years due to the unusual regulatory factors controlling it, but that doesn’t mean its completely of no use as an investment. As a relatively potentially non-volatile, but high-dividend, company it seems like it still has some chance at worth, return, and portfolio design while it goes through its restructuring. 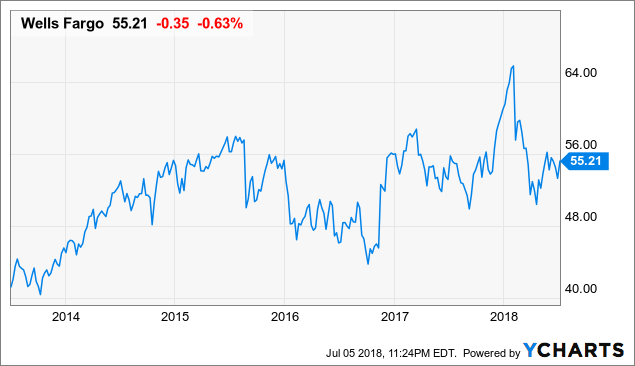 At Tech Investment Insights I discuss specific companies and investment products that I believe are especially poised to gain in the market, as well as the one to avoid.

Focusing on technology in particular, I provide you updated risk-reward ratings of dozens of companies, price targets on potential worthwhile investments, portfolio strategies, and alluring risks to avoid. I hope you will give it a look.

Disclosure: I am/we are long KBE.