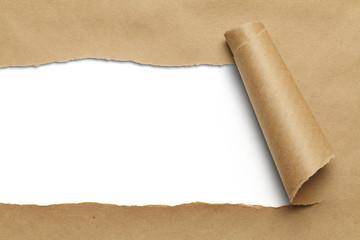 Tanger Factory Outlet (SKT) reported earnings yesterday and the headline results were a beat, with FFO coming in ahead of expectations. However, just like the multiple times I have covered Tanger before, once you look underneath those numbers, there is a lot to be worried about. At the time of writing this article, shares were down over 5% after-hours due to Tanger lowering full-year guidance and posting negative same-center NOI. In addition to those two items, I will be covering a multitude of other items that show Tanger has more downside.

The main reason why the stock was down after-hours was because Tanger lowered their full-year FFO guidance from $2.43 to $2.49 per share to $2.40 to $2.46 per share. Same center NOI came in at -1.5%, which was lower than the guidance the company gave at the end of the year and significantly lower than the +1.0% same center NOI growth Tanger had last year in Q1.

It was not just the headline guidance that was lowered, if you look at the underlying components of that guidance, it is easy to see why shares are down and have further downside. When you combine all these: same center NOI guidance down, occupancy guidance down, and store closings up, the result is likely to be a lower share price.

It appears Tanger dressed up the dividend in their investor presentation to make sure it showed double-digit CAGR. If you look back through previous investor presentations dating back to Q1 2016 when Tanger started showing CAGR on its dividend chart, each one like the first image below showed the 3-year CAGR. However, the second image below from the earnings presentation for this quarter shows 5-year CAGR. Why change from a 3-year CAGR to 5-year CAGR all of a sudden… if they had left the CAGR at 3-year, the dividend total for 2018 would lead to a 3-year CAGR of 8%. This is obviously not in the double digits and much lower than the 13% 3-year CAGR shown just last quarter. 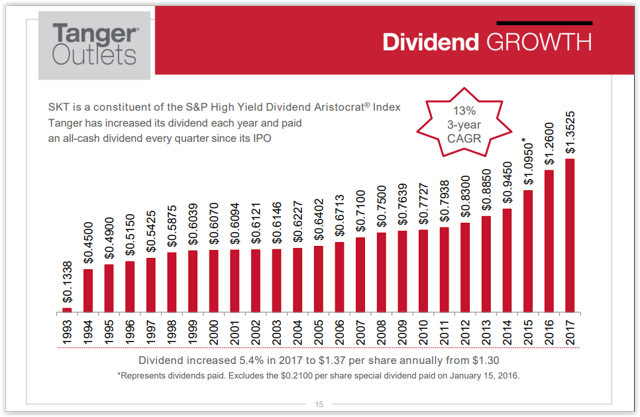 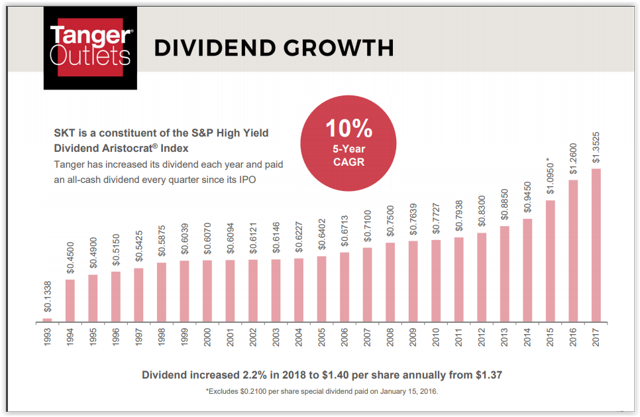 One thing that investors might overlook when looking through the Tanger investor presentation on the “Quality Ratios” slide is the actions by rating agencies. As of Q4 (first image below), you can see that the rating agencies have both had a stable outlook since 2013. With the investor presentation yesterday (second chart below), you can see that S&P has recently updated their outlook to negative, while Moody’s maintained their stable outlook. This means that if things continue to deteriorate, Tanger runs the risk of its credit rating being downgraded. 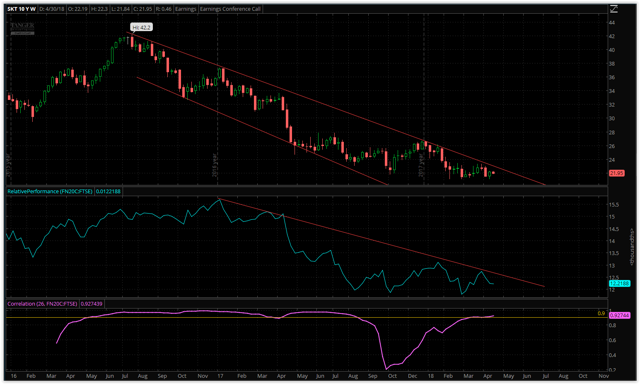 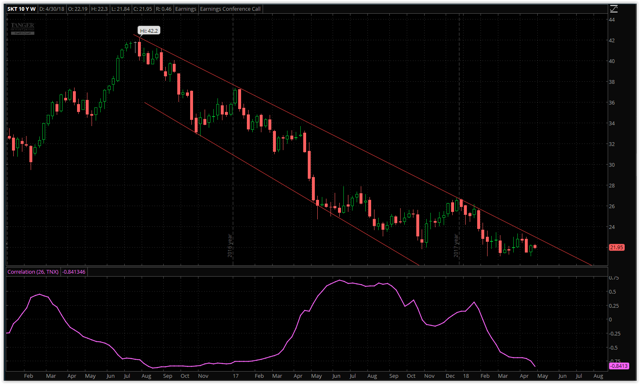 Gas prices are something that could have an impact on Tanger given their locations tend to be further away from population centers and are often described as “destination outlets.” The following chart from GasBuddy.com shows the average price of gasoline in the United States is at its highest level in the last two years. With rising gas prices, it is a double hit for Tanger. Since their locations are further away from population centers, consumers have to spend more to get to the location and in turn, they then have less to spend once they are at the location. While the dollar amount in the increase in gas prices is not that significant, the larger impact is what higher gas prices mean for the psychology of consumers. When consumers see $3, $3.50, $4 gasoline prices, they tend to change their behavior, and I believe one of those key psychological points is approaching. If gasoline prices reach a national average of $3/gallon, it is likely that level will trigger news stories on the subject, which will, in turn, get consumers thinking about it. 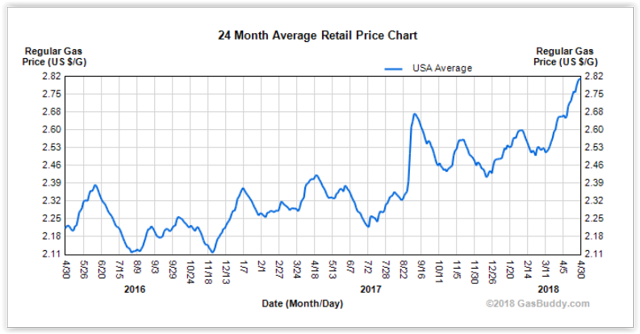 What Tanger did right: Share Repurchases & Sales per Sq. Ft.

On the Q3 2017 earnings call, Tanger noted that they thought their shares were undervalued and strong. Tanger followed that with zero shares purchased in Q4 2017. Now, a couple of weeks ago when Tanger announced the dividend increase, they also announced that they had repurchased 444K shares during Q1. While this purchase was small, it was a step in the right direction for believers in Tanger.

Our conviction that our shares are undervalued and so strong that we basically employ two-year, $125 million share buyback plan in place. We repurchased 1.9 million of our common shares during the year at a weighted average price of $25.80 per share for total consideration of $49.3 million, most of which was funded by asset sales. This leaves $75.7 remaining under our $125 million of share repurchase authorization. ~Q3 2017 Earnings call

No shares were repurchased during the fourth quarter. ~Q4 2017 Earnings Release

Surprisingly, sales per square foot increased from $380 to $384 y/y, which is something that investors who are bullish on Tanger can take note. The decline in sales per square feet trend has been lower over the last couple of years, so it will be interesting to see going forward if this was just a temporary blip or if the trend will reassert itself. 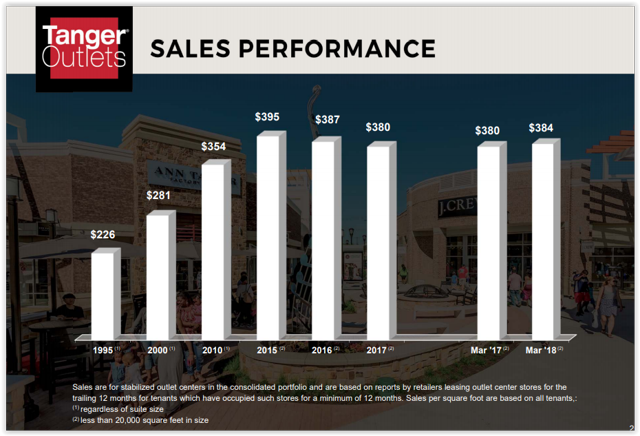 In closing, given the lower guidance, the continued pressure in retail REITs (which Tanger has a high correlation to), increasing interest rates (which Tanger has a strong inverse correlation to) along with the myriad of other data points I covered, I expect shares of Tanger to continue their downtrend. For all the reasons covered in this article, I am maintaining my $15 price target that I initially posted in my October 2017 article, when the price was $25.46.