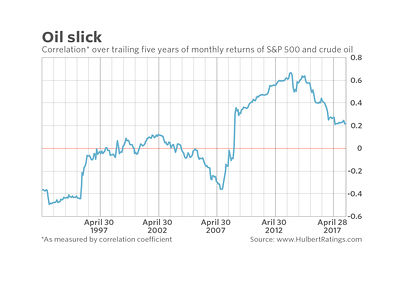 CHAPEL HILL, N.C. How bad is it for the stock market that oil is trading for more than $70 a barrel, the highest its been in 3 1/2 years?

My answer: No one knows. In fact, it might actually be good news.

I acknowledge that this might not seem very helpful information. But, helpful or not, its the truth. And it actually is useful to know that the oil-stock correlation is unpredictable, if for no other reason as a defense against those who confidently claim the contrary.

It wasnt always this way, of course. For several decades before the 2008 financial crisis, oil
CLM8, +0.25%
and the S&P 500
SPX, +0.94%
were inversely correlated at a high degree of statistical significance. That meant that, when oil went up, it was usually bad for stocksand vice versa. One academic study, published in 2008 in the Journal of Financial Economics, found that you could have beaten the stock market over the prior three decades by following a simple rule of being out of the market whenever the price of oil rose by more than 5% in the previous month.

Then came the financial crisis, and stocks relationship to oil changed. Now it was the case that a rising oil price was more often than not good for stocksjust the opposite of the situation that prevailed prior.

This is illustrated in the accompanying chart, which plots the correlation coefficient for the relationship between stocks and crude oil over the trailing 60 months. If the two were perfectly correlated, with oil and stocks rising and falling in perfect lockstep, that coefficient would be plus 1. It would be minus one if the correlation were perfectly inverse, with stocks rising when oil falls, and vice versa. A coefficient of zero would mean there is no detectable relationship one way or the other.

Opinion: Investors are wrong to shrug off the economic impact of rising oil prices

Notice that, before 2009, the stocks-oil correlations were mostly negative. But then there was a large and abrupt changewhich, at least so far, has persisted. At no point since 2009, for example, has the correlation coefficient dropped to as low as even the highest level of the prior couple of decades.

What accounts for this big shift? Theories abound, though there is insufficient historical data to prove or disprove any of them. Some have suggested, for example, that the shift reflects a change in investors concern away from oils drag on corporate profits to a worry about deflation. When investors were worried about oils impact on profits, of course, a higher price was a bad thing. But when they instead became anxious about the possibility of the economy being dragged down by a deflationary spiral, a higher oil price became a good thing.

Read: U.S. gasoline prices could top $3 this summer thanks to Iran and Venezuela

Alternately, the shift might have been caused by the U.S. becoming a net oil exporter. According to the Energy Information Administration, in May 2011 the U.S. became a net exporter of refined petroleum products. A plausible argument can be made that, around that time, higher oil prices became a net positive for the U.S. economy.

Furthermore, theres also the possibility that the years since the financial crisis are a mere exception, and that the relationship between oil and stocks will eventually revert to the pattern that prevailed over the three decades before then.

No doubt there are other possible explanations too. The broader point, however, is that without any certainty about why the shift in the oil-stock relationship occurred, the future of that relationship remains profoundly uncertain.

Now read: Oil and the dollar are doing something they have only done 11 times in the past 35 years

For more information, including descriptions of the Hulbert Sentiment Indices, go to The Hulbert Financial Digest or email mark@hulbertratings.com.

Heres why he stock market has its swagger backfor now

Nvidia making more from crypto mining than AMD, but expects a bigger drop