In the most recent quarter, Alibaba (NYSE:BABA) reported some trademark impressive growth numbers, including 41.2% revenue growth and 37.3% per-share earnings growth. Yet, every time I see stock pickers discussing BABA stock being undervalued, they tend to use the same handful of arguments against buying Alibaba stock. 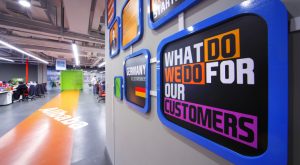 Source: Photo by via Alibaba

Alibaba is the biggest e-commerce and cloud services provider in the second-largest and fastest-growing major economy in the world. Here’s why several of the major concerns about buying BABA stock are wrong.

Yes, China’s economic growth is slowing. But if you are excited about the fact that the U.S. just reported a 3% annual GDP growth rate in 2018 for the first time in 13 years, hold onto your hats. China’s GDP growth slowed once again in 2018. It fell to 6.6%. U.S. investors are doing cartwheels over 3%. China easily doubled that rate in a down year.

On top of that, the trade war with the U.S. was a major reason China’s economic growth slowed in 2018. Just last week, National Economic Council Director Larry Kudlow said the U.S. and China are on the brink of a “remarkable, historic deal.” Even if you aren’t as optimistic as Kudlow, most investors believe a trade deal is coming eventually. Even Warren Buffett is optimistic about the outcome of the trade war.

“I generally think when two very smart countries have something very important at stake they’ll end up making rational decisions,” Buffett said of the trade war in an interview last week.

Fortunately, with the vast majority of its business generated domestically in China, Alibaba’s numbers haven’t taken much of a hit from the trade war. However, a slowing Chinese economy hits BABA’s business indirectly. If anything, a trade deal will improve investor sentiment related to China stocks. It will certainly eliminate a major uncertainty.

This issue particularly grates on me. Yes, Alibaba set up Alibaba Group Holdings as a variable interest entity, or VIE. This means investors buying shares of BABA stock are not buying direct ownership interest in Alibaba. They are buying stakes in a corporation established in the Cayman Islands that has a contractual relationship with Alibaba guaranteeing it a portion of Alibaba’s earnings.

I get why American investors may think this setup is sketchy if they don’t understand why it is happening. Chinese laws prohibit foreign ownership of companies in certain industries. Alibaba, Baidu (NASDAQ:BIDU) and other internet companies are subject to these laws. So in order for them to gain access to U.S. capital, they set up VIEs. Alibaba didn’t set up a corporation in the Caymans to skirt U.S. laws. It did it to skirt Chinese laws.

This last argument goes hand-in-hand with the VIE argument. The idea is, as Axios put it last year, Alibaba “can’t escape” rule by the Chinese government. The Chinese economy is not an “open” economy like the U.S. economy. The Chinese Communist Party micromanages Alibaba and other leading tech companies. The government has even appointed Alibaba Communist Party board members.

My response as an Alibaba investor? Who cares?

I’m not a fan of government control or influence over companies. But so far the only actions China has taken regarding Alibaba have been positive. China has blocked Alibaba rival Google in China. The government has been repeatedly hostile toward Walmart (NYSE:WMT). China blocked Amazon.com (NASDAQ:AMZN) streaming site Twitch in 2018 after government restrictions forced Amazon to sell its public cloud assets in China in 2017.

I’m not a fan of the Chinese government picking winners and losers in the business world. But it’s nice to invest in one of the government’s chosen winners.

Now, let’s get back to the VIE structure. U.S. investors seem concerned that, since they don’t actually have an ownership stake in Alibaba’s assets or Alibaba voting rights, the company (or the Chinese government) could screw them over at any time. In theory, that’s true. But take a minute to ask yourself what would happen in that scenario.

“While it may seem risky, keep in mind that Chinese companies do want to maintain their access to U.S. capital markets,” DataTrek co-founder Nicholas Colas told me last year. “Arbitrarily changing the VIE structure in a way that hurts U.S. investors would end that access.”

The Bottom Line on Alibaba Stock

Sure, China can screw over U.S. investors if it wants. But that would certainly be the end of the gravy train of U.S. capital for Chinese companies. Why would Alibaba (or the Chinese government) shoot itself in the foot like that?

BABA stock bears who want to talk about lack of transparency or rising costs or declining margins, fire away. Those are all fair points. But I’m tired of hearing about government influence, VIE structure and a slowing China economy. None of those issues are reasons to be scared of BABA stock.

As of this writing, Wayne Duggan wa