Stocks finished mixed in a week highlighted by a Donald Trump news conference. 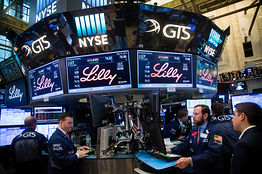 Not that the rally has been anything to sneeze at. The S&P 500 has gained 6.4% in the two months since the election. Cornerstone Macro’s Carter Worth puts that in context:

A quick update of the Post-Election Performance Table of November 9th. Two months later who would have thunk it Fourth best performer drum roll D.T. And far above the median and mean 2-month, post-election market performance of +2.34% and +1.29% respectively.

And the best two-month performance? That would be the two months following Herbert Hoover’s election in 1928.

Given that the market has been on a torrid run over the past several months (particularly since the election), an increasing number of investors are convinced that stocks are on the verge of a meaningful correction based on our client conversations. However, many of these same clients also do not expect any sort of prolonged bear market to ensue and instead are biding their time in hopes that this anticipated market pullback will present better buying opportunities particularly when the likelihood of Trumps policy proposals being enacted becomes clearer. Quite frankly, we believe this approach is a mistake and also believe all the catchy buy the election and sell the inauguration chatter is nonsense. In fact, we do not envision a scenario that takes stock prices meaningfully lower from current levels. Everything we track continues to suggest that we are in the midst of a secular bull cycle. The bottom line is that as economic growth continues to slowly progress (as expected), earnings growth will eventually provide the support that higher stock prices require longer term but right now stock prices have probably gotten a little ahead of themselves. Therefore, we wouldnt be surprised if the market does give some of its gains back over the near term, but we continue to recommend that investors remain proactive in their approach and use any periods of potential weakness as an opportunity to add selected exposure to US stocks.

Still waiting for one.