The past year has been an uncertain time for those invested in film exhibitors, with a combination of factors contributing to the doubt. The growing adoption of streaming, fears involving a potentially shrinking theatrical release window, and a weak slate of summer movies in 2017 all conspired to weaken demand and keep movie-goers at home last year.

While all the major chains took it on the chin, IMAX Corporation (NYSE:IMAX), the leading provider of premium large-format screens, was among the hardest hit. The stock was down 26% last year and is sitting at breakeven so far in 2018.

IMAX is scheduled to report the financial results of its first quarter on Tuesday, May 1 before the market opens. Here are a few things investors should be watching. 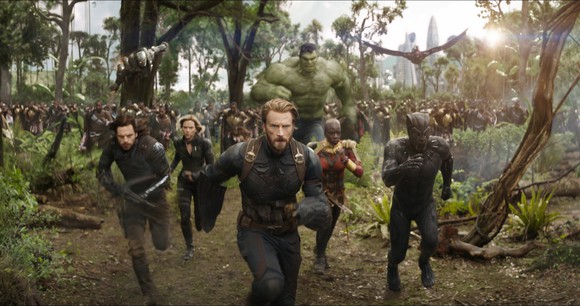 There’s a lot to like about IMAX. Image source: Disney.

To recap last quarter’s performance, IMAX reported revenue of $125.6 million, an increase of 17% year over year, soaring past analysts’ consensus estimates of $118.8 million. The company generated adjusted earnings per share of $0.34, up 55% over the prior-year quarter and in line with expectations.

Analysts’ consensus estimates for the quarter expect revenue to grow 15% to $79.3 million, producing earnings per share of $0.10, compared to break-even bottom-line results in the prior-year quarter. IMAX doesn’t provide quarterly guidance and only provides a broad forecast for the entire year.

The company faces tough comps, as box office revenue was lower by 2% in the first quarter compared to the same period last year,which produced hits like Beauty and the Beast, Logan, and Get Out.While Black Panther dominated theaters during the quarter this year, there was less enthusiasm for other films, leading to the decline.

One key area to watch is the backlog of theater installations. IMAX makes agreements to install its systems in partner theaters, but those take time. The backlog represents the theaters waiting to be completed and provides a window into growth for the company. IMAX ended the year with 494 systems on the list, and based on recent activity (detailed below) it’s possible the additions for the first quarter will break into the triple digits. IMAX said it expects to install roughly 145 new theaters in 2018, with 11 of those new screens occurring in the first quarter.

Even with the tough environment, there are still reasons to be optimistic regarding the current quarter’s results.

IMAX reported its second-best weekend results ever when Disney’s (NYSE:DIS) Black Panther grossed more than $50 million in global box office sales at IMAX locations in its first 10 days of release. The company also revealed that it had achieved record attendance in theaters in China during the two-week Chinese New Year holidays, which took place between mid-February and early March. This could help boost results above expectations.

IMAX has made several announcements recently that point to overall strength in its business. The company announced that it has added 14 new theaters in India since February and had nearly doubled its previous footprint in the country over the prior 12-month period.IMAX also revealed a significant agreement with Cineworld and its recently acquired subsidiary Regal Entertainment Group to install IMAX Laser systems in 26 new theaters and upgrade 29 existing locations across the U.S. and Europe.This announcement follows a 30-theater deal with Jinyi of China.

In what could represent even bigger news, IMAX signed a binding agreement with AMC Theaters (NYSE:AMC) to install the company’s next generation IMAX with Laser system for commercial multiplexes at 87 of AMC’s highest-performing locations in the U.S. The agreement also includes “IMAX’s 12-channel sound technology that incorporates new side and overhead channels to deliver greater dynamic range and precision for ultimate audio immersion and sound you can feel.”AMC is planning major renovations at these theaters, installing reclining chairs and providingenhanced food and beverage choices for patrons. With the help of Earth’s mightiest heroes, U.S. box office sales may be back on track to grow this year, with additional help from a strong slate of high-profile films. These includeDeadpool 2, Isle of Dogs, Solo: A Star Wars Story, Jurassic World: Fallen Kingdom, Ant-Man and Wasp, The Incredibles 2, X-Men: Dark Phoenix, Fantastic Beasts: The Crimes of Grindelwald, and Mary Poppins Returns — among others.

It is important to remember that with the majority of its growth in international markets, IMAX’s fate will rest less on the stagnant pace of U.S. box office sales, and more on increasing global demand. I think this bodes well for the company’s future.

We’ll find out soon enough how the company did in the first quarter, but I think this is the beginning of a winning year for IMAX.