After a double-digit run-up in 2017, any bit of negative news was enough for the market to pull the trigger on 3M Company (NYSE:MMM) shares. The month of April proved a perfect hunting ground for 3M bears, with the industrials stock shedding 11.4% in value during the month, according to data provided byS&P Global Market Intelligence.

With that, April went down as the worst month for 3M so far this year.

3M entered the past quarter on a solid note, reporting strong numbers for the fourth quarter and fiscal 2017 and topping it off with an outlook upgrade for the full year in January.

It was a quiet quarter, except for a management reshuffleannouncement that’ll see CEO Inge Thulin step down to take over as the executive chairman of the board. Effective July 1, he will hand over the reins to Michael Roman, who’s been with the company for three decades.

There was nothing to worry about there, but what investors didn’t see coming was a dismal quarterly report from 3M. So when the company announced a staggering 54.5% drop in its first-quarter net income and downgraded its full-year earnings per share (EPS) guidance, the market sent 3M shares down 8.5% on April 24. By the end of the month, the stock had lost another three percentage points. 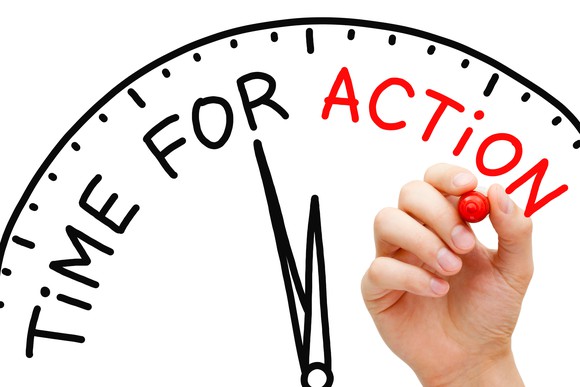 3M stock’s recent drop may be a signal for investors to buy. Image source: Getty Images.

The huge drop in 3M’s Q1 profit looked scary, except that the company took big one-time hits upward of $1 billion due to recent changes in the federal tax law and the settlement of a long-pending suit with the State of Minnesota.

While tax changes were beyond 3M’s control, settlement of the suit was welcome news, as it ended an uncertainty that could have cost the company as much as $5 billion.

As for the guidance downgrade, 3M now expects to earn $8.68 to $9.03 in GAAP EPS in fiscal 2018,as opposed to the $10.20 to $10.70 that it previously guided for. However, the company didn’t anticipate the tax and legal-settlement charges as they were quarter-specific events. So adjusting for those, 3M is now calling for EPS to range between $10.20 and $10.55 this year, which means, in effect, it downgraded its EPS outlook by less than 1% at the midpoint.

3M also downgraded its guidance for organic sales growth by a percentage point to 3% to 4%, but that’s mainly because of unexpected weakness in the electronics markets that have hit companies globally. Otherwise, 3M reported strong sales growth across all its business segments.

3M revising its 2018 outlook just a quarter after upgrading it may have come as a big shock for investors who foresee the industrials sector, in general, gaining strength.

3M’s EPS outlook, however, still calls for double-digit growth in 2018. Moreover, its sales surged 7.7% in the first quarter to hit all-time highs. If the pace continues, 2018 could be a record year for the company. Meanwhile, 3M continues to be a solid dividend stock, giving investors enough reasons to consider the April drop in the stock price an opportunity.