Industrial parts supplier W.W. Grainger (NYSE:GWW) has increased its dividend for an incredible 47 consecutive years. It’s actually a Dividend Aristocrat, putting it in rare company dividend-wise. However, a great dividend history doesn’t instantly make Grainger a value stock. If you are looking for a dividend-paying stock with a growth bent, however, this industrial giant could be an interesting option for you.

A quick look at valuation

The first tool most investors use when looking at a company’s valuation is the price to earnings ratio. Grainger’s P/E ratio is around 25. In and of itself that number doesn’t tell you much. However, compare it to the market’s roughly 21 P/E and Grainger’s five-year average P/E of nearly 22 and you can see that the company looks a bit expensive today. 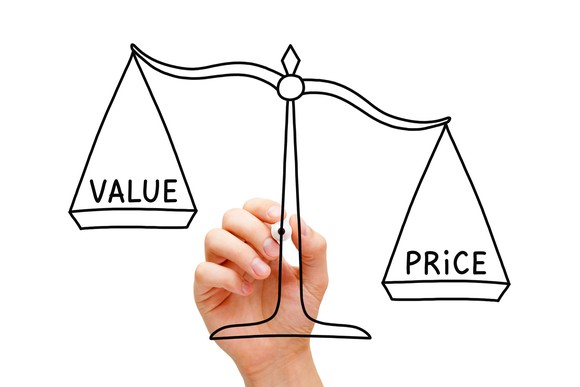 P/E, however, is just one valuation metric you can use, and it has its limitations. For example, one-time charges that aren’t indicative of a company’s true earnings power can bias the results of the equation. Grainger, for example, took a one-time charge in the fourth quarter due to the recent changes in the U.S. tax code.Which is why you should also consider price to book value, price to sales, and price to cash flow. This is where things start to get interesting with Grainger.

The company’s P/B ratio is nearly 9, well above the market’s 3 and Grainger’s five-year average of around 6.Although a portion of the difference is related to the non-cash tax charge noted above, it didn’t have a particularly large impact on the company’s retained earnings. Investors, then, do appear to be giving the company a premium valuation relative to the value of the assets on its balance sheet. That fits with the story the P/E is telling. However, the P/S ratio and the P/CF ratio both provide a different view.

Sales tend to be more consistent over time than earnings, which is why the P/S ratio is worth adding to the ensemble of tools you use. In this case, Grainger’s P/S ratio is roughly 1.5. That’s below the market’s P/S ratio of 2.1 and about in line with Grainger’s five-year average for the metric. That said, the company’s operating margin dipped in 2017 because of the changes it made to its pricing approach, suggesting that each dollar of revenue is worth less than it was before. However, the operating margin decline was relatively modest (around 90 basis points) when compared to the notable business model shift. And operating margin isn’t notably outside the company’s historical range over the past decade. Moreover, with the largest pricing changes in the rearview mirror, management can now focus on margin improvement. All in, Grainger doesn’t appear to be expensive if you are looking at the P/S ratio.

Using cash flow as a valuation tool adds the third major financial statement to the valuation mix. By focusing on cash, meanwhile, you avoid the distortions from the non-cash, tax-related charges noted above. Here Grainger’s 15.75 is higher than the market’s roughly 13.5, but again roughly in-line with its own five-year average.

The takeaway from all of this is that Grainger certainly doesn’t appear cheap today. But it may not be expensive, either — which is where another metric comes into play: price to earnings growth, or the PEG ratio. This metric takes the P/E ratio and divides it by the company’s earnings growth, thereby looking at valuation in relation to growth.

Grainger’s PEG ratio is currently 1.45. Its five-year average for this metric is 1.75. While Grainger may not be appropriate for a value investor looking for a bargain basement entry price, it could be an interesting option for someone with a growth bent looking for a fair entry point. That story is backed up by the company’s earnings projections for 2018. 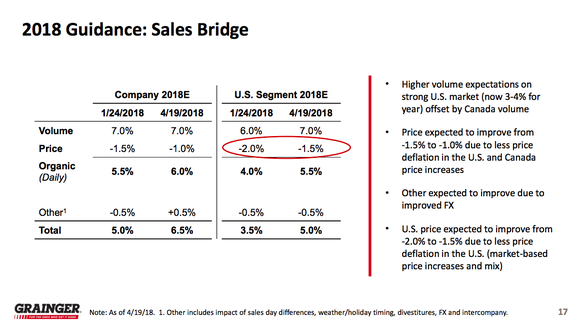 At the start of the year Grainger was calling for sales growth to be between 3% and 7% in 2018. It projected that adjusted earnings would grow as much as 24%. After the first quarter, however, it upped those ranges to revenue growth of 5% to 8% and earnings growth of as much as 33%. To be fair, 2017 was a difficult year for the company, with earnings falling around 1%.

Granger’s got relatively easy comparisons here. However, the revenue and earnings projection update makes it pretty clear that Grainger is turning things around and on track for a solid 2018.

Growth worth a closer look

Grainger’s 1.8% yield is a little too low for my taste, and its valuation a little too rich. My investment style is more value-based and income-focused. However, even after a strong price advance over the past year or so, Grainger still looks like a compelling option for growth-minded investors if you look at more than just the P/E ratio. Add in the recent 6% dividend hike and Grainger appears to offer a good balance between income and growth. If that sounds interesting to you, then Grainger is probably worth a deep dive today.