Shares of radio broadcasting company Entercom Communications (NYSE:ETM) were slammed on Tuesday, falling as much as 24.1%. At the time of this writing, shares are down about 19%.

The stock’s decline follows the company’s first-quarter earnings release, which featured worse-than-expected revenue and adjusted earnings per share as the company’s net revenue for the quarter fell about 7% year over year on a same-station basis. 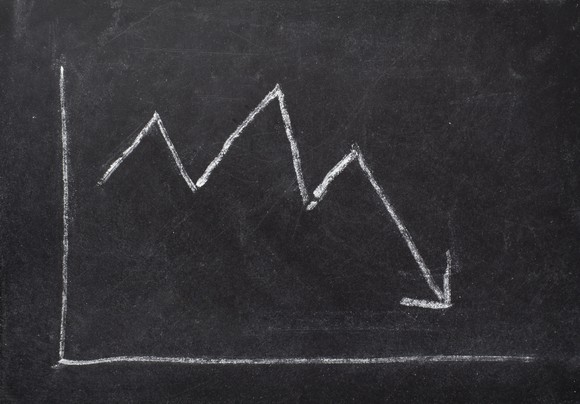 [W]e have moved quickly to implement rapid change and have made good progress on our various integration, synergy and transformation goals. We have built a terrific leadership team and are driving strong ratings growth and launching a number of revenue-driving initiatives to capitalize on our scale and compete far more effectively against other media for a larger share of ad spending.

But Field said its first quarter was negatively affected by “soft general local advertising conditions and a number of temporary factors, most notably the exclusion of $12 million in revenue due to financial issues at [United States Traffic Network].”

Insisting that Entercom’s current headwinds are temporary, Field said he is looking forward to its growth initiatives gaining traction. He believes these initiatives will help drive “meaningful sustainable growth as we capitalize on the compelling brands, assets and capabilities of this exciting, emerging company.”

Alongside its first-quarter results, Entercom also announced the launch of the Entercom Audio Network, which Entercom says will enable it “to capitalize on its scale and reach to participate directly in the $1 billion network radio business.” The network will launch on July 1.